However, the major source of NCPS’ local funding currently has nearly a $3 million budget deficit and is faced with an even cloudier future thanks to declining property values – the latter representing its major source of annual revenue.

On Thursday afternoon, those two trains collided when the NCPS Board of Education met with the county’s Board of Commissioners at the school system’s Central Services Office in Jackson. 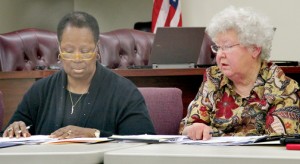 Northampton County Finance Officer Dot Vick (right) explains a portion of the county’s proposed 2015-16 general fund budget to the Board of Education at Thursday’s meeting. At left is Fannie Greene, chair of the county commissioners. Staff Photo by Cal Bryant

There, NCPS Superintendent Dr. Monica Woofter re-stated the school system’s plans calling for $150,000 annually in recurring appropriation from the commissioners in order to increase the salaries of the school system’s classified staff, which have been frozen for the past several years, thus causing NCPS to lose highly qualified employees as they seek higher wages at other jobs. The second request was a one-time appropriation of $1.2 million (minimum) to as high as $3.6 million to cover the costs of a plan calling for NCPS to re-configure its grade alignments at certain schools or possibly consolidating certain schools, all of which are deemed as long-term cost-saving measures.

In her opening remarks at Thursday afternoon’s joint meeting, Fannie Greene, chair of the Commissioners, stated although there had been a level of distrust between the two boards in the past, she assured the Board of Education that the Commissioners were there to listen to their financial requests and would take them under consideration in light of funding gaps from the state and federal governments.

“With the state continuing to shift more funding for education and other things, the county is at a huge disadvantage to assign that funding due to the size of our tax base,” Greene remarked. “We’re asking that you understand that we have to fund the entire operations of county government as well as other agencies with the dwindling funds we receive. I hope we can come to a happy medium.”

CountyManager Kimberly Turner shared the current numbers regarding Northampton’s available fund balance. She said the total fund balance is $9.98 million. However, when subtracting the $3.77 million stabilization as required by state statute along with $1.23 million in restricted funds and nearly $400,000 in other appropriated funding, the unassigned fund balance stands at $4.58 million.

“The LGC (Local Government Commission) requires us to have a minimum eight percent in unassigned fund balance, which in our case would be $2.87 million,” Turner said. “The goal of the Commissioners is to increase that minimum to 20 percent, or by $7.1 million. That’s what they are working towards now….a goal to increase that fund balance by two percent each year until we reach 20 percent.”

Northampton’s current tax rate of 92 cents is the third highest in the state.

“This board does not want to raise taxes,” Turner said of the commissioners. “We’re not sure of how we are going to close that budget gap of $2.8 million by June 30 (the end of the current fiscal year). Adding your two funding requests only increases that gap.”

Turner did say that the commissioners were receptive to the $150,000 request.

“They (commissioners) have discussed that part of your request, but have not made a decision,” she stated. “We wanted to come here today and give you an overall picture of what our budget is going to look like. We are working on the 2015-16 budget now and your request will be considered during that process.”

Board of Education Chairman Clinton Williams said there was a sense of urgency to the requests made by the school system in order to move forward with their future plans.

“We have some plans to reconfigure our schools and the funds we’re asking you for is going to determine on when we can move forward with those plans,” Williams said. “I was hoping we could get some feel from you on this.”

Smith-Woofter said now that April was so near, even if the commissioners granted immediate approval to the funds needed for the consolidation/reconfiguration, those plans could not be implemented until the 2016-17 school year.

“We would have needed to know something (approval of the funding) by March 1 in order to do something by 2015-16,” the Superintendent noted.

“We have a lot of financial issues, as you’ve heard through our presentations today, but we’re still receptive to your plans,” Greene concluded.