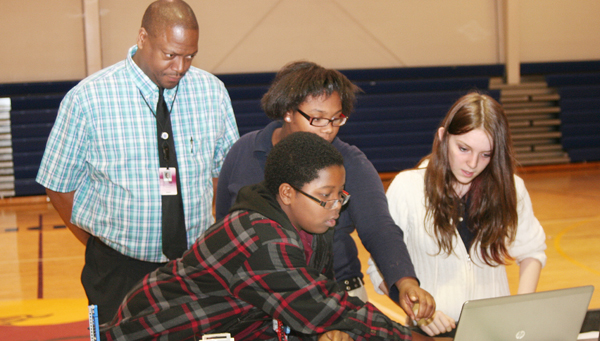 AHOSKIE – The Elite Eight won’t be the only team competition this weekend.

The competition features middle school robot designers from Bertie Middle School, Hertford County Middle School, and Warren County Middle School.  The teams are part of the FIRST-Lego League, a partnership between FIRST (For Inspiration and Recognition of Science and Technology) and toymaker, Lego Group. The students have been designing and programming Lego Mindstorms robots to complete tasks since the project began in late September. Solutions are worked out and the teams then meet for regional tournaments to share their knowledge, compare ideas, and display their robots. 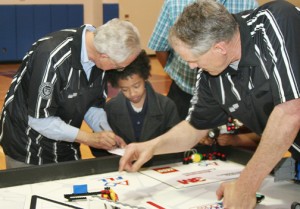 A sort of dress rehearsal was held at the three schools last week, including for the three teams competing from Bertie Middle School, to prepare the youngsters for what they can expect at RCCC this weekend.

“This year’s theme for FLL is ‘World-Class Learning’, so the kids are tasked with going out to look at a problem or a need that’s not been resolved, propose a solution, and the present their findings to the public,” said Joe Kronner of Winston-Salem-based Must-Innov8, sponsors of the project, which seeks to stimulate interest in the sciences and engineering among middle and elementary school students.

“There are three judging sections,” Kronner continued. “First, the project development based on the theme, and then they go before the judges who will have five minutes with which to ask them questions.  The second section is core values which stress the skills you need to be successful: teamwork, analysis, communication, professionalism; and the final section is robot design: they bring their robots in and talk about how well they designed it and the unique things their robot can do.”

Kronner says this will be the first session, and following a break the students will have a chance to run their robots on the tables.  Each team gets three runs, with each run timed at two-and-a-half minutes long.

“Based on the task on the table, with each task being assigned points, when they’re done with their work, the referees will determine what they’ve accomplished and credit them for that,” he added. “The awards will be for best robot run, best teamwork, best project, and then best overall winner.  No team can win more than one award, so the grand champion could be one of the previous award winners.”

Some of the participants are sixth graders; others are seventh graders, and finally eighth graders.  This is the first year of the competition, but those returning middle schoolers could have a chance to compete again next year.

“They’ll get a chance during this practice run to feel what it’s like to go before a judge and like sports, practicing is okay, but it’s when you get to compete that it’s the most fun,” Kronner says.

The practice run had no awards, but each of the teams was given the judges’ evaluation sheet and used the critiques to see what is needed to improve upon in the week and a half before competition.

The judges came from the education as well as the business field.  That included Lewiston’s Perdue Farms Director of Operations, Jeff Stalls.

“It’s been a different experience,” Stalls maintained. “It’s interesting to watch the young adults in their presentations and to judge this.  Perdue did a $15,000 donation to this project so we have an interest in getting young people interested in science and math.  The kids are focused on the mission of their robots and how they’re going about doing these multi-missions.”

Mack McCary was more than a judge at the competition.  He was also a partner in Must-Innov8.

“I bring over 30 years of involvement with innovation in North Carolina, most recently with New Schools,” McCary said. “I saw this as another different opportunity to really encourage students at a young age to be creative, innovative, and to maintain their interest in STEM.  Employers today are starving for a workforce because they cannot find the Stem spirit and creativity they’re looking for.  So this is an opportunity that’s a lot of fun and where kids can learn without realizing that’s what’s happening.”

The students were also under the watchful eye of their schools robotics instructor; in BMS’ case, Nancy Brittenham says she’s learning as much as her young charges.

“We’ve been teaching each other,” she said with a chuckle. “They know more about the robotics than I do, because they’ve done every bit of this themselves.  If something’s not working they have to go back and make changes.”

The program for the various tasks that the robots undertake are programmed by the students on laptop computers, and then downloaded by USB into the Lego device.

“As they go along they can adjust the robot and the program prior to execution,” Brittenham noted. “It can be something as simple as moving it two inches left or right, or even how the robot arm motions move up and down.”

Brittenham says in the interest of gender equity, the girls have been better programmers than their male counterparts.

“Maybe it’s the way they take charge,” she says with a smile.

BMS STEM instructor Darrell Walker felt that following the session when the students had received their critiques there were obvious sighs of relief.

“I think this scrimmage relaxed them,” Walker said. “They seem a lot more poised now in getting ready for the actual competition.”

“If we can maintain this STEM interest through high school and on into some post-secondary whether it’s an industry certificate, or a two or four-year degree, employers are going to be thrilled and it gives these kids a future,” McCary said.