Living the best you can 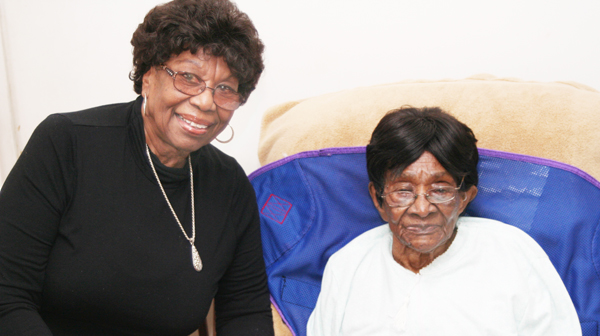 “I’d like to have some cloth to make my dollar dress,

I do not want a large piece, a yard or two will do I guess.”

POWELLSVILLE – Retha White can still recite that poem, which was written in 1899, and she first spoke it as a child.

This past Feb. 20 White celebrated her 106th birthday surrounded by family and friends and members of her beloved Greater Wynns Grove Baptist Church.

She even received a special birthday commendation reserved for the state’s centenarians from North Carolina Governor Pat McCrory.

“It arrived in the mail from Raleigh one day shy of her birthday last month,” said White’s daughter, Mabel Tull, who left her own home in Alabama to return to Bertie County and now assists in caring for her mother.

Seated in a den recliner at her Powellsville home, warmed with a homemade quilt that was made when she possessed younger, more nimble hands, White is alert and glib for her age and recalls many details from her humble beginning in Bertie County.  Like many who are approaching, or have even surpassed that age, some questions had to be repeated because of hearing, but beyond that she is in exceptional health for her age.

“February 20, 1909,” she recites clearly and distinctly; pronouncing each word of her birth date for clarity.

Retha Blanche Mitchell’s life began on a small tract of Bertie County land where her father was a sharecropping farmer and the other men of her family followed likewise.  The family moved often and farmed in areas along the Chowan River from near the Hertford County line in Harrellsville to near the town of Colerain.

“My father was a farmer,” White recalls proudly. “There were five of us; myself and my two sisters, Annie Ruth and Cora.”

Though they lived in a different section of the county, White joined Piney Wood Chapel Baptist Church with her mother as a young girl.  She later switched membership to Greater Wynns Grove – then known simply as ‘Wynns Grove’ – in later years and attended both church and Sunday School regularly until only a few years ago.  On her mantelpiece are photos of the 100th and 103rd birthday party celebration that the pastor, Bishop Thomas Lee, and her church family, held for her in years past.

Though she never worked in the farm fields as a young girl, she married Seymour White as a teenager – he was 25 and she was 15 – and they became the parents of five children.  White, like many of the other men of that time, worked a small family farm and his wife spent most of her time raising a family as a homemaker.

“It’s been a long time ago,” she says wistfully. “But I keep very good recollections.  I remember things that were told to me when I was just seven years old.”

White says memory-recall runs in her family where a number of her relatives have passed along her familial history.

“People told me that when I grow up they hoped that I would be like that, too,” she says. “Just like my mother was when she was just seven years old.”

She chuckles about it now.

“I’ve done the best I could and I haven’t forgotten it, what they told me,” she acknowledges with a warm smile.

White admits over the years the two biggest things she’s proudest of are being a farmer’s wife and her participation in church.  Even her church members admit that her recipes and the by-products of those efforts, from the garden to the stove, are to be admired.  They hark back to the days of boiling water canning before pressure cookers.

As for her cooking, even as she matured, White says she received many compliments.  One of her favorites was from a visiting minister to her church.

“There was this preacher, and when he was younger he had farmed with my husband,” she relates. “Well, one Sunday he called me out from the pulpit in front of everybody saying, ‘Mrs. White was a good cook back in her day, and I have to ask you can you still cook like you used to?’  I told him I didn’t know, but that I hadn’t heard no complaints.  So I cooked as long as I could.”

Desserts were among White’s culinary favorites, her daughter recalls.

“Her pineapple cake was absolutely delicious,” interjects Tull. “I and my brother (Rudolph) used to love it.”

Following retirement from farming and after the children were all grown and moved away to begin their own lives, the Whites moved from Colerain to Powellsville.  Her husband passed away in 1975.

When White eventually moved her church membership back nearer her Colerain roots at Wynns Grove, she was active in church auxiliaries up until a few years ago when the activities became too much for her.

She never got a driver’s license, but was driven to church weekly and rarely missed service; even earning her own parking space right by the door.

“Anyone who drove her to church never had to worry about finding a place to park,” Tull says jokingly. “But she’s never driven in her life.”

“That’s the one thing I regret,” White says softly, “that I never learned how to drive.”

White was, and still is, especially proud of the church Missionary Circle and the “Sunshine Band” that includes Bible study and incorporated missionary work.

White’s efforts were so much appreciated by the members and leadership of the church that Greater Wynns Grove named a special wing for her called the ‘Retha White Gala Room’ at the church’s Enrichment Center, built when the church and its Fellowship Hall were restored following the devastating tornado in April 2011 that destroyed both structures.  It was dedicated in 2013.

“The Proclamation at the dedication reads, ‘To the oldest disciple in the Church’,” Tull says proudly.

White says there’s no special secret to her longevity.  She credits it to just doing her best in life.

Every night before she retires, White says she has read Psalms 91: ‘He who dwells in the shelter of the Most High will abide in the shadow of the Almighty.’

“Just live the best you can,” White advises. “That’s all I know to tell you to do is just live the life God would have you to live.  Look to the Lord, because he will take care of you.”