The Traveler’s road leads to Murfreesboro 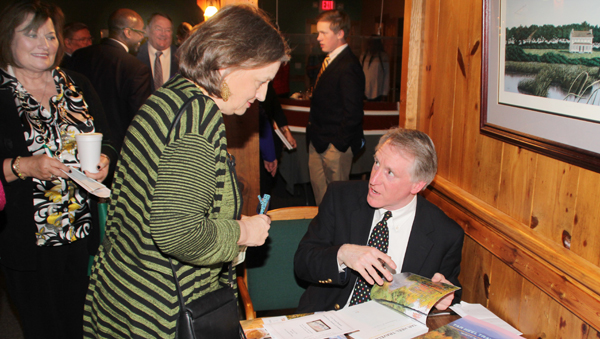 Scott Mason (seated) chats with Beckisue Joyner as he prepares to autograph a copy of his latest book. Mason served as the keynote speaker at Monday night’s Murfreesboro Chamber of Commerce Banquet. Staff Photo by Cal Bryant

MURFREESBORO – If there’s a story worth telling, chances are good that Scott Mason will show up at your door.

With a population of roughly 10 million and covering nearly 54,000 square miles, the chances are even better that Mason has only scratched the surface of the stories he can share of those that live, work and raise families across North Carolina.

Mason – aka “The Tar Heel Traveler” on WRAL-TV 5 – shared a brief glimpse of his award-winning work here Monday night as he served as the keynote speaker at the 63rd annual Murfreesboro Chamber of Commerce Banquet. 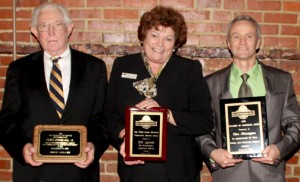 Those earning awards at the 2015 Murfreesboro Chamber of Commerce Banquet were, from left, Frank Stephenson, Dell Aycock and Tim Flanagan. Staff Photo by Cal Bryant

“The fun of doing stories for The Tar Heel Traveler is that the stories are poignant, they’re funny, they’re witty,” said Mason to a packed audience inside the upstairs banquet room at John’s Seafood & Steaks. “They run the gamut between people, places and history. North Carolina is such a tremendous place to do such stories.”

If there is a sidebar to Mason’s life, it’s the fact that he has visited all 100 counties….perhaps making him North Carolina’s unofficial tour guide.

“I love traveling to all our little towns and villages, places like Murfreesboro,” he remarked. “We’ve done close to a dozen stories here. I love it because of the history of this town and how friendly the people are here. The history you have here is a gem.

“I also love Murfreesboro because of two special men here tonight – Earl Telliga (manager of WDLZ-FM) and Frank Stephenson (local historian). Both of those men are so passionate about their community; they care about their community. We need more North Carolinians like that,” Mason added.

Born in Raleigh and raised in Boston, Mason said he developed a knack for writing at an early age.

“As a kid I always knew what I wanted to do, that was to be a storyteller,” Mason shared. “I knew I wanted to go into broadcasting.”

After graduating from Washington and Lee University in Lexington, VA in 1984, where he majored in Journalism and Communications, Mason went to work on fulfilling his childhood ambition, first landing a job in radio and then on to TV with stops in Chattanooga, TN, Winston-Salem, and Dayton, Ohio.

“Basically I was just a general assignment reporter, covering murders, fires and car wrecks,” he said. “But at each station I went to I would gravitate towards the fun, feature stories. I loved doing those types of stories.”

In 1991, Mason joined the PBS affiliate in Richmond, VA where he created, wrote, produced, and hosted a weekly newsmagazine. Virginia Currents won more than 100 awards for journalistic excellence during his tenure there. 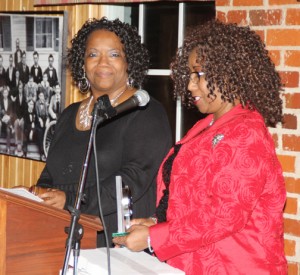 Newly elected Murfreesboro Chamber President Brunet Parker (left) receives a memento from her sister, Jenice Brinkley, marking the significance of Parker being the first African-American female to hold that position since the Chamber’s founding in 1953. Staff Photo by Cal Bryant

Mason’s success caught the attention of WRAL-TV, the CBS affiliate in Raleigh. In April, 1997 he became the station’s Documentary Producer. He researched, wrote, and produced nine documentaries before adding his talents to the nightly news team as a reporter specializing in features.

“In 2007, the news director at WRAL told me the station was considering bringing back an old feature series from 25 years ago called The Tar Heel Traveler and wanted to know if I was interested,” Mason recalled. “Oh my Lord, I thought I had won the lottery. Ever since then this one photographer and I have traveled across the whole state. We do stories on out-of-the-way places and interesting people.

“I have the best job in television because we are totally unsupervised,” Mason continued. “We go where we want to go; shoot the stories we want to shoot. It’s so much fun.”

However, the job does have its demands. The Tar Heel Traveler airs four segments each week, each at 5:55 p.m.

“We’re constantly on the go, traveling, shooting, and editing,” he stressed.

Mason said the trick to meeting those deadlines was, “shooting in bunches.”

“Let’s say one day we’re heading to your area of the state; we might stop in Rocky Mount for a story, then one in Roanoke Rapids; and wind up here in Murfreesboro for a couple of stories,” he said. “Then we bring it back to the station and spend a day or two writing and editing those stories to air, and then go out on the road again. Sometimes when we travel to the far ends of the state, it may turn into an overnight trip. On those trips we may wind up shooting eight, nine or ten stories.”

As of Tuesday, The Tar Heel Traveler has shared 1,392 stories with WRAL viewers.

“People ask me all the time, what is your favorite of those 1,300-plus stories,” Mason said. “I usually dodge the question by answering that my favorite story hasn’t been done yet. I’m still looking for that favorite story.”

Mason did share a few of the stories he really liked, to include 90-year-old Carl Webb of Greensboro. He attends a very large church and would ask the church secretary for a list of birthdays of the other parishioners, and on their special day would call them and sing happy birthday.

Then there was a story on Mary, a woman from Wake Forest who Mason said had a name that matched her personality. The story angle was that her old Chevy Suburban was nearing a half-million miles of service. The Tar Heel Traveler was there to document that bit of rare history for a vehicle.

In Charlotte, there was a story about Clara Jones, a woman with 26 pianos in her home. It turned out she was a piano teacher and her students could be characterized as being from disadvantaged families.

Mason said the ever growing popularity of The Tar Heel Traveler serves as the basis of building story ideas.

“I always get inundated with emails from people suggesting story ideas,” he said. “It’s not unusual to get a half-dozen story suggestions a day. They add up. And most of the suggestions are great stories. The bad thing is that we can’t get to them all.”

The good news is that a real storyteller has a knack of finding a completely different story than the one currently on the radar screen. Case in point was one on a retired firefighter with a collection of memorabilia from his career.

“I was chit-chatting with the man about how long he had lived there when he tells me his house is divided by a county line,” Mason recalled. “Sure enough, he and his wife sleep in Randolph County and eat in Guilford County. I told Robert (his cameraman) to get the gear back out of the car because we have another story….the story of the county line house.”

Mason has also shared the tales of hundreds of “mom-and-pop” restaurants that dot the landscape of North Carolina, to include the famous Walter’s Grill, serving customers from the same location in downtown Murfreesboro since 1944. Those stories are now in a book – Tar Heel Traveler Eats: Food Journeys Across North Carolina.

“These are the stories behind the stories,” he said of an effort that took him a year to complete. “Restaurant stories are always so meaningful.

“……I’ve sat at countless counters, enjoying bacon and eggs, hamburgers and hot dogs, barbecue, biscuits, doughnuts and ice cream…..I feel a kinship to these landmarks, because that’s what they are, and I hope they don’t fall by the wayside. But I don’t think they will because I sense there are people like me who get up everyday and walk out the door of their home and through the door of their other home where they visit with the friends they love and eat a good meal. But it’s not the food that comes first, it never was about the food. I don’t want it to end…..but sooner or later you come to the final cup and settle the bill, thank the nice waitress, and rise from your seat and step back into the world, leaving home behind,” Mason said as he read an excerpt from his book.

It seems that home is wherever Scott Mason stops, places where he feels warmly welcomed to share yet another story along his continuing journey as The Tar Heel Traveler.

Ray Felton, owner of Metal Tech of Murfreesboro, served as the Master of Ceremonies.