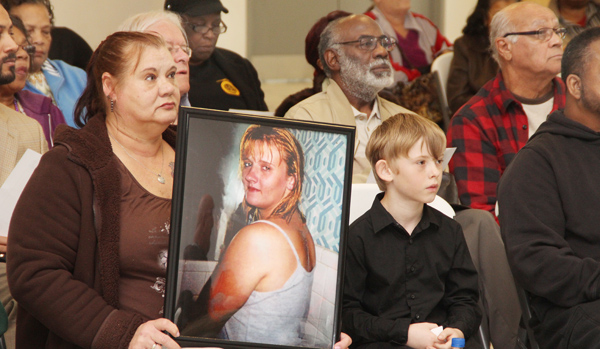 A family member holds a portrait of Shonda Stansbury of Roanoke Rapids, one of six missing individuals from either Halifax or Northampton counties who were remembered Saturday during a prayer vigil held in Jackson. Staff Photo by Cal Bryant

In an emotional event where more than a few tears were shed inside a warm and dry Northampton County Cultural & Wellness Center, family and friends of six individuals who went missing years ago gathered for a prayer vigil to remember those currently unaccounted for as well as soliciting additional law enforcement manpower from the federal level to assist local lawmen in helping to find answers in each of these cases. 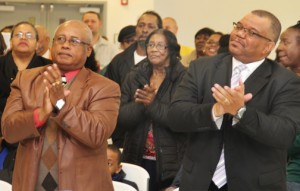 Members of the audience stand and clap as Lucy Ellen Jacobs (not shown) sings one of two spirituals at the close of Saturday’s event. Staff Photo by Cal Bryant

“Today we gather to remember and we thank you for coming out and remembering,” said Shelia Moses, event organizer and the sister of Daniel Moses, in her opening remarks. “I ask our District Attorney Valerie Asbell to stand up; our Congressman G.K. Butterfield to stand up and call the FBI to help us. It’s the right thing to do. Let me make one thing clear, we’re not here to protest; we’re here to pray.”

Moses referenced the train derailment in the town of Halifax last week, one that drew national attention from such media outlets as CNN and The New York Times.

“I want them to know that our train has been off the tracks,” she said, referencing the years of misery and hopelessness felt by the families of the missing.

That sentiment was echoed by Lola Robinson, the mother of Shawn Alston.

“We need help; we need someone to step in and form a committee devoted to working on these cases,” Robinson suggested. “I need to find my son. I need those involved to open up and talk about this. If you can’t talk to the police, then talk to a family member, a church member, or someone and tell them what you know.”

Robinson knows with the passage of time, she feels her son is no longer alive.

“I need to bring him home and give him a proper burial,” she said. “It hurts that it’s now going on three years and we still haven’t found him. He was treated like a dog; he’s not a dog. He had plans, and someone took him away. Those I feel took him away are at a standstill (in their lives), doing nothing. I need closure; we need closure.”

Speaking on behalf of his father, Robert Moore Jr. said he was thankful for the local NAACP chapters and local law enforcement coming together as one in an effort to continue to shine a light on these cases.

“I don’t feel alone; we don’t feel alone, but it’s still tough not knowing what happened to my father and the others still missing,” he stated. “If everyone will push, we can move forward.”

Jackie Stansbury fought back the tears as she remembered the life of her missing sister.

“I still get phone calls from her kids asking where’s my mom….it breaks my heart,” she said. “I have no answers to give them.

“No one should have to endure this type of pain every day,” Stansbury continued. “There’s somebody out there that knows where my sister is and can lead us to her. She is the mother of four children….they deserve an answer; they need to know where their mom is at. They need to go to sleep at night knowing that she isn’t being tortured. Please keep all these cases alive. These family members need to know if their loved one is no longer with us or being held somewhere. They all deserve to be found and be brought home. Don’t give up…keep the faith.”

Kim Gibson, a family friend of the Bridgemans, said Amy called her husband on the day of her disappearance, saying she would be home “in a little while.”

“That little while never came,” Gibson remarked. “She didn’t disappear into thin air….someone knows where she is. Amy was a very kindhearted person. If she had 20 dollars and you needed it, she’d give it to you.

“There’s 21-year-old son who misses his mother; there’s a 16-year-old daughter who misses her mother; her parents love her and miss her; please help them find Amy Bridgeman. Everybody deserves to come home, even in the worse case scenario,” Gibson concluded.

Michael Hines spoke on behalf of the Reynolds family.

“It’s been five years; she (Jalessa) was only 18 years old; she had left home to go to the library and we haven’t seen or heard from her since,” Hines noted. “It’s painful that it’s been this long and we still have no answers; we have no clues. I appreciate ya’ll remembering her in this way. This family needs closure.”

Moses, when speaking directly about her brother, said he didn’t go missing; rather, he was taken.

“They took my mother’s son; they took my brother,” she said. “Since June 16, 2011 our lives haven’t been the same. We wake up every morning and ask where’s our brother. We ask the same thing when we lay our heads down at night. We need to know who took our brother.”

The Rev. Dr. Carroll Dickens Sr. of Patillo Chapel Baptist Church in Henrico asked God to provide comfort to the families of the missing individuals.

“I believe God is going to show us something that will lead to finding these missing people,” Dickens said as he opened the event with prayer.

Local leaders of the NAACP – Tony Burnette of Northampton County and David Harvey of Halifax County – each promised their continued support.

“Six people, less than 30 miles apart, are missing,” said Burnette. “Here, now in the 21st century, in the greatest nation in the world, how can we stand by and allow this to happen? I will not in good conscience stand by and do nothing as such tragedies occur.

“Somebody in the communities of Northampton and Halifax counties knows something about these cases,” Burnette continued. “We’re hoping the words said today will touch somebody’s heart and they will come forward with information that will help lead to closure for these families. We’re not going to sit by while another tragedy or injustice occurs. We’re going to stand up and we’re going to take action.”

“This absolutely makes no sense to me, especially in this time of the technology we have, that these families do not have closure after all these years,” Harvey noted. “We stand together with Brother Burnette and Northampton County as one to fight and move forward. This has nothing to do with color; this has to do with human life.”

Support was also promised from the top law enforcement officers in both counties.

“I’ve met with (Halifax County) Sheriff (Wes) Tripp and we are working together on these six cases,” said Northampton Sheriff Jack Smith. “We are following up on any leads we get, but sometimes they have led to dead ends, where people are just looking for compensation and not provide information.

“I promise you that as long as I’m the Sheriff, if I get a call about any of these cases, I will call you back. My goal is to help these families find closure before I retire. I believe there are people in our local area who have information about these cases. I’m begging you, I’m pleading to you, to please come forward and contact us.”

Smith said he and Tripp are working on a plan to use billboards along the major routes in the two counties to bring attention to the six that are missing.

“I welcome all partnerships as we look after the well being of the citizens of Halifax and Northampton counties,” said Tripp. “We need for these families to have closure.”

Prior to Moses’ 79-year-old cousin Lucy Ellen Jacobs closing out the program by singing two emotional old-time hymns, the Rev. Franklin Williams of Roanoke Chapel Baptist Church in Jackson offered words of encouragement to the families of the missing individuals.

“To hear these words, words of families that are hurting, if you have any compassion in your hearts you ought to feel something,” he stated. “It is written (in the Bible), and I’m paraphrasing, that you need not to be weary for in due time you shall reap a harvest if you do not give up. What a man soweth, that shall he also reap.

“It’s amazing to me on how we can drop bombs in Afghanistan that cost about $150,000 apiece, but we can’t drop $150,000 in these counties to help find these people. It’s amazing to me how the FBI can launch thousands of investigations that cost millions of dollars, but they can’t take the time to come here and find out what happened to these victims,” Williams added.

What was pleasing to Williams was the one common thread he saw in Saturday’s 90-minute gathering attended by approximately 300 people.

“I heard people say they will never give up. We got to make noise all over Halifax and Northampton counties. We need to remain tenacious and keep an undying faith. Remember that God specializes in the impossible. If all of us pray together, I believe God will hear us and honor our prayers. And whoever committed these dirty deeds, remember that you will reap what you sow,” Williams closed.