GATESVILLE – Since July of 2003, Al Parker has served the citizens of Gates County.

His co-workers, family and friends are now asking for those same people, as well as those all over the state, to come to Parker’s aid. 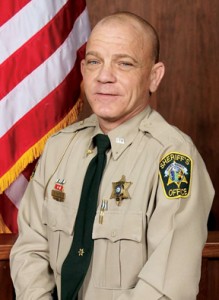 Parker, a Deputy with the Gates County Sheriff’s Office as well as a member of the Eure Volunteer Fire Department, was hospitalized last week in Norfolk. There he remains; the “heart” that he poured out in an effort to help those in need is not operating at full strength.

“Al may be small in size, but he’s a giant of a man and he’s a fighter,” said Gates County Sheriff Ed Webb. “He suffered a major heart attack last week. The doctors are doing all they can for him, but it looks like at this point that he’s going to need either a mechanical heart or be placed on a transplant list for a new heart.”

Webb said Parker “had a good day on Sunday.”

“They were able to get him out of bed and walking around a little, but everything from a medical standpoint is still day-to-day with him,” the Sheriff stated. “Back home we’re trying to do what we can to offer him some help.”

Currently there is an account set up at the State Employees Credit Union office in Gatesville to accept donations on Parker’s behalf. Webb said those interested in making a donation can do so at any SECU branch statewide….ask for the George “Al” Parker Special Account.

“Any amount is greatly appreciated,” Webb stated. “He has medical insurance and that will cover the lion’s share of what’s needed surgically; it’s the out-of-pocket expenses and the medication he’ll need after surgery where these donations will help. I’ve been told that if he is given a heart transplant, the medication he’ll need afterwards will cost in the thousands of dollars every month.”

As of Wednesday afternoon, nearly $1,800 had been donated.

To help add to that amount, Webb said several individuals and businesses are in the process of donating items to be used in separate raffles. There is also a plan in the works to conduct a fundraising meal on May 8 (11-2 for lunch and 4-7 for supper) at the Gatesville SECU. That take-out meal will be prepared by Nixon’s Catering. Tickets are now on sale at the SECU, the Sheriff’s Office, Eure Volunteer Fire Department and Hall Ruritan Club.

Donations to the special account can also be mailed to the SECU at PO Box 4, Gatesville, NC 27938.