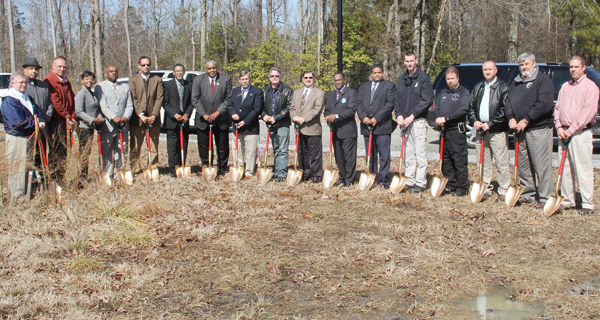 Hertford County officials are joined by those representing the towns of Ahoskie and Murfreesboro to formally break ground on a new E911 and Emergency Operations Center to be constructed behind the new Hertford County Courthouse near Winton. Staff Photo by Cal Bryant

WINTON – A construction contract has been awarded and a formal groundbreaking has been held. All that’s left is to watch the newest addition of the growing complex at the Hertford County Courthouse spring to life.

At a ceremony here Monday, officials from the county as well as Ahoskie and Murfreesboro gathered to turn the first shovel of dirt, signaling the start of a year-long process to build an E911 and Emergency Operations Center.

The county earlier received a $4.25 million grant from the North Carolina E-911 Board. The lion’s share ($2.64 million) of that grant will be used to build the single-story facility. Cadet Construction Company of Raleigh was awarded the building contract at the Jan. 5 meeting of the Hertford County Board of Commissioners. The remainder will be used for state-of-the-art equipment as well as furnishings.

That contract officially began Jan. 30 and Cadet Construction was given 365 days from that point to complete the project.

David Brown, who was hired last year as the county’s E-911 Director, said the project has moved forward at a slow, but steady pace.

“The E-911 Communications Governance Board continues to meet with our architect, Ernie Olds, and Sherri Bush of L.R. Kimble, both who have provided us with expert guidance throughout this process,” Brown said.

L.R. Kimble – based in Ebensburg, PA and with 10 offices in five states – is an engineering firm that specializes in communication technology services.

“This is a date we have all longed for,” said Bill Mitchell, Chairman of the Hertford County Board of Commissioners, on Monday morning prior to the groundbreaking ceremony. “On behalf of this board, I thank the county and municipal officials who have had a hand in this project. I also thank the E-911 Communications Governance Board for all of their hard work, all of the different things they had to consider to make this project work for the benefit of all citizens of this county.”

“We have received some great advice from our architect and from Sherri (Bush) to guide us in the right direction,” Williams said. “But from the outset of this project, back several years ago, our law enforcement agencies got together first and started the discussion on the need of having a combined communications center. Then the town officials got on board, and later the development of the Governance Board, and here we are today.

“It was all a matter of trust between the difference agencies and different towns,” Williams added. “They were faced with giving up their autonomy and authority within their individual areas and they came together in the best interest of all.”

Williams added that no taxpayer dollars will be spent on construction or the purchase of equipment for the Center.

“That’s all covered by the grant,” she said.

In an overview of the project, Brown said representatives from Hertford County, Murfreesboro and Ahoskie initially met on March 1, 2011 and launched discussions about consolidating the three PSAPs.

Brown said the objectives of this consolidation are as follows:

To provide a single contact point for the receipt of emergency assistance requests in the county;

To provide for the control of a coordinated dispatch and radio communications service for all law enforcement, fire, EMS, forestry, emergency management and animal control;

To provide the public and field response agencies with trained, certified and/or credentialed 911 communications personnel; and

To maintain an operational emergency center within a new facility should grant funds be provided. That grant was applied for and accepted by the state on Aug. 2, 2013.

“Today is about the kickoff for construction of our new 911 Communications Center. As a department we are very excited and cannot wait for the ribbon cutting in the not too distant future,” said Brown.

Hertford County Sheriff Juan Vaughan said this facility has been a dream for quite some time.

“I’ve been Sheriff since 1998 and I can remember us having this same discussion about a combined dispatch center back in the early 2000’s,” Vaughan said. “That early discussion never developed into a plan, but now we have a plan and a new center will be built.”

The Sheriff said such a facility will benefit not only the county citizens, but the telecommunicators as well.

“Right now we operate three, one-person PSAPs in our county on 12-hour shifts,” Vaughan noted. “They’re all human, meaning they have to take a bathroom break, but they have to leave the radio to do so. Their job gets even tougher when we have weather events like we had recently. The phone is constantly ringing and they are the first point of contact for those in need. It’s a tough job that the general public doesn’t see.”

Once the new Center opens next year, there will be three telecommunicators per shift.

Commissioner Ronald Gatling praised the work of the Sheriff and other members of the Communications Governance Board in putting together what he called, “a first class facility.”

“The passion they have speaks volumes about their vision to have such a facility here in our county that will prove as very beneficial to all of our citizens,” Gatling stated.

“On behalf of the law enforcement arena, it’s great that we were all able to come together and have this state-of-the-art communications center here in our county,” said Ahoskie Police Chief Troy Fitzhugh.

The Governance Board is chaired by Hertford County Emergency Management Director Chris Smith.

“This project has been on the drawing board before, a long time ago, but everyone back then wasn’t singing on the same sheet of music,” Smith stressed. “With this group, these guys recognized the need for a change from day one of this current process. I appreciate them for being open minded to get us where we are today.”

Upon opening, the Center will be staffed mostly by current dispatchers. In February of 2012, an interlocal agreement was established between the county and the towns of Ahoskie and Murfreesboro to operate a combined public safety communications system and center for the answering and dispatching of emergency responders.

According to that agreement, all employees of Hertford County E-911 Communications Center will be county employees and will fall under the management of the E-911 Director. Added to the agreement was that all full-time employees of the towns in the positions of telecommunicators will be retained by the county with transfer of town seniority, longevity, leave balances or other benefits in accordance with county personnel policies in place at the time of hire with Hertford County E-911 Communications.

The salaries of the Center’s staff will be split among the county and the two towns, based on the population of the areas each currently serves.

The agreement also established the Governance Board, which include the police chiefs of Ahoskie and Murfreesboro, the county sheriff (or his designee), a representative of Hertford County EMS, a representative of the Hertford County’s Fireman’s Association, the county’s Emergency Management Director, town council member(s) or their designees from Ahoskie and Murfreesboro and a county commissioner or his designee.