“She was so smart. She was like the sweetest child. She made everyone’s life brighter,” said her cousin, Kaniesha Booker Brown, from New York on Monday morning, “The last time I saw her was a few months ago. She just enjoyed being a child, singing and dancing. Oh my God, once you met her, she was totally unforgettable.” 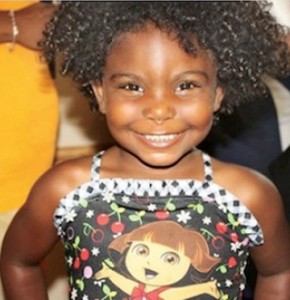 Now family members are trying to deal with the shock and numbness that came from learning that Berry, a 5-year-old, died in a two-vehicle auto accident Friday morning on Interstate 95 in Roanoke Rapids, a crash that has also left  Berry’s aunt, Angelissa Sukram, in critical condition.

Sukram’s mother, Latonya Evans, said her daughter is on a respirator with swelling on the brain and broken bones. Right now, Evans said, her daughter has a 50-50 chance, but is making efforts to respond.

Sukram, who will be 24 in April, went to school to be a medical assistant and has goals of becoming a nurse, her mother said.

“She has always been a loving person, always trying to help people,” Evans said.

As for the 5-year-old tragically killed in this accident, Evans stated, “If you met her, you would know her. She was a real bubbly child. She was very smart. She loved her family.”

The child, Evans said, was being taken back to her mother in Fayetteville after a funeral for her father’s uncle in New York while Sukram and Vanessa James, a family friend who was driving one of the two vehicles involved in the crash and is now facing multiple charges by Roanoke Rapids Police, were headed to Georgia.

Some of the family had moved to Fayetteville, Evans said. Sukram had lived there, but moved back to the Amityville area of New York.

The family had known James for several years, said Evans.

“She’s supposed to be her (Sukram’s) best friend,” Brown said.

Now there is anger, Evans and Brown said.

“I’m thinking how could she be in that car with that baby and no car seat,” Evans said.

Charges filed against James, who resides in Amityville, NY, by the police department reflect she was reportedly under the influence of marijuana at the time of crash. The charges also reflect there was no child restraint seat in the vehicle and that Fanez was not buckled with a seat belt when the car James was driving struck a tree and ejected the child after law enforcement says James struck the car in front of her in the southbound lane of the interstate near the 172 milepost.

Brown said James has reportedly indicated that she was struck from behind while evidence collected by Roanoke Rapids Police and the state Highway Patrol shows that she struck another vehicle from behind, causing both cars to go off the roadway. The two occupants of the vehicle that was struck were treated and are okay.

Brown said the family will be following the case closely as it progresses. James, who was arrested and held under a $50,000 bond, has a first appearance in Halifax County District Court on April 15.

“It’s just not fair to be under the influence with a child in the car. It’s ignorant and selfish to drag someone else in this,” Brown alleged. “It’s unfair. She (Fanez) was one of those people who was going to be something. We will never get to see what she was supposed to become.”

The reality of what has happened has not struck Fanez’s mother, who is expecting another child, Evans said.

As far as the situation with James, Evans said that’s not her focus.

“I can’t comprehend if I’m mad at her or what. I’m concentrating on this (her daughter),” she stated.

Brown wants the case to serve as an example and speaking of Fanez and her mother said, “It hasn’t set in. She misses her baby. She didn’t have a chance to say goodbye. We just want people to see that light she had about her.”

Trooper J.D. Warren of the state Highway Patrol, which is assisting in the investigation, said it appeared a 2011 Toyota from Florida was traveling in the left southbound lane when it was hit from the rear by the 2011 Toyota James was driving.

The Florida Toyota ran off the roadway while the vehicle James was driving struck a tree, trapping one adult (Sukram) and ejecting the child.

According to Deputy Chief Andy Jackson of the Roanoke Rapids Police Department, the DWI charge against James reflects drug use. That drug use was also reflected in a charge of possession of drug paraphernalia and misdemeanor possession of marijuana.

Jackson declined to say how much marijuana was in the vehicle.

In addition to those counts, James faces charges of felony death by motor vehicle, felony manslaughter by negligence and failure to secure a passenger under 16.

(Lance Martin is Editor and Publisher of www.rrspin.com. This story and photos are reprinted with his permission.)