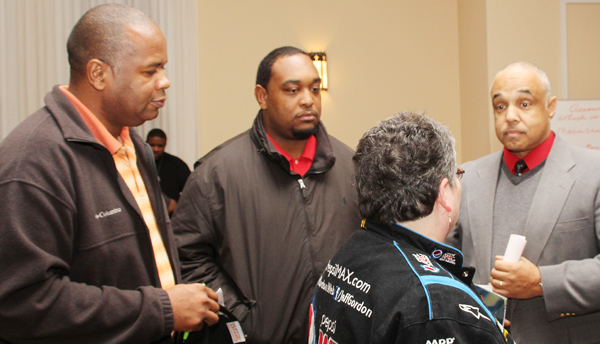 Curtis Freeman (right), Hertford County Commissioner and Chief of Security of County Schools, holds a discussion with three individuals at the conclusion of last Thursday’s “Unity in the Community” meeting. Staff Photo by Cal Bryant

MURFREESBORO – An effort to bring unity across religion, race and age in Hertford County has sprouted wings and is flying.

Evident of that fact was a near full house here Feb. 12 where the fellowship hall of Murfreesboro Baptist Church served as the initial meeting place of a Unity in the Community forum.

Unity in the Community is the brainchild of C. David Stackhouse, pastor of New Ahoskie Baptist Church and a member of the Ahoskie Town Council, and David Shields, an Ahoskie businessman who also serves on the Hertford County Board of Education. Both men were concerned about social issues in the county, ones that had the potential to spark an event such as the ones witnessed over the past few months in Ferguson, Missouri and New York City. The men met with Hertford County Public Schools Superintendent Dr. Michael Perry where plans were developed to unify the local school students with law enforcement as well as bringing together members of communities in the county to seek ideas on how to safeguard the public. 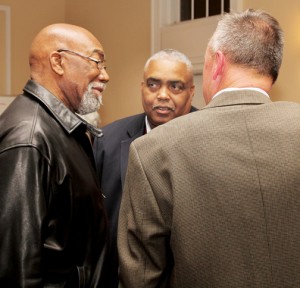 “A meeting like this is one where as citizens we should all have an interest in, one that promotes civic trust and encourages public safety. As Christians, we are taught to help bring together what sin has broken apart,” said host pastor, the Rev. Lee Canipe of Murfreesboro Baptist.

Shields said his soul was deeply touched by the deaths of young and old people across the nation, victims of social unrest.

“We have got to do something to make a difference here in Hertford County,” said Shields. “It would kill my soul if one of our young people made a mistake, did something stupid, and it caused injury or death. I feel for the parents of those who have been impacted by tragedies such as the ones we’ve seen elsewhere; I do not want to see any of our parents here have to suffer through something like that.”

Shields said the Hertford County effort did not need to stop at the county line.

“We need to take this same message to Northampton County; to Bertie County….it’s that important,” he said.

Shields said the biggest lesson to share with young people is how they need to react if stopped by the police.

“They need to know how to act; what they need to do and what they need not to do,” Shields noted. “The other side of that is that law enforcement, and I know they have a tough job, needs to understand not to overreact. My goal is have our police officers back in our schools, not just when they’re called to handle a confrontational situation, but rather to meet our students and for our students to know and meet them.”

Stackhouse invited each member on the panel of guests to share what was on their hearts.

“We are all children of the King; we do not need all this division and negativity,” said Rev. Dr. James Shearn of Jordan Grove Missionary Baptist Church in Winton and President of the Hertford County Chapter of the NAACP.

“This community – law enforcement, faith-based individuals, our school system and our local partners – is coming together and will save our schools,” Futrell said. “Each and every day we don’t put forth an effort to steer our students in the right direction is a day we lose a student.”

He echoed Shields’ sentiment on teaching the students how to respect law enforcement, and the respect citizens expect from lawmen.

“We had our first meeting this morning (Thursday) between law enforcement and 100 of our students,” he shared. “These meetings will be ongoing for the remainder of this school year with all 740 of our students to help bring about unity in our community. This mutual relationship will go a long way in helping to prevent the tragic events we’ve seen unfold across our nation in the past months.”

Hertford County Sheriff Juan Vaughan along with Troy Fitzhugh and Darrell Rowe, respectively the Police Chief in Ahoskie and Murfreesboro, are all onboard with the “unity” vision.

“I’ve assigned each one of my deputies to a school here in our county; they go in, Monday through Friday, and walk around and we will continue to do that,” Vaughan stated. “We’re here to help our young people; we’re not here just to lock them up.”

“We are standing together; we are working together,” Fitzhugh said. “I tell my officers to not just ride around; they need to get out of their car and interact with the public….get to know the public; that’s how you become a good community police officer, to meet those you serve.”

Raymond Eure, Chief Deputy of the Hertford County Sheriff’s Office, implored the public to become involved in this unification process.

“You know what’s going on in your community; become a leader, become involved and help us help you,” Eure stated.

The crowd gathered at the event was asked to offer their thoughts. Most asked about gang activity in their neighborhoods and in the local schools.

Futrell said school officials and law enforcement have turned to social media in an effort to help identify gang activity.

“We have identified students we believe to be involved in gang activity and since they post publically to social media sites, we’ve been able to monitor that activity,” said Futrell. “We’ve been able to do the same thing in monitoring the use of illegal drugs and those who are drinking alcohol. We’ve even identified those involved with weapons.”

Futrell said photos taken from social media sites of students involved in such activity as he mentioned have been used during meetings held by school officials with the students and their parents.

“We’ve met with 24 thus far; we’re showing the parents what their children are doing when they’re not around,” Futrell said. “But instead of brow beating these people, we let them know we’re here to help them. We’ve turned them on to available resources. We’ve done the same thing with the involved students and I’m here to tell you that this effort is making a tremendous impact.”

Stackhouse said two of the photos he saw of students involved in illegal activities were members of his church.

“I was shocked, to say the least,” Stackhouse admitted. “It just can’t happen at our church; it can happen at your church. We need to reach out to these young people before they get way in over their heads.”

Curtis Freeman, a Hertford County Commissioner whose full time job is that of Chief of Security for Hertford County Schools, said the effort to identify illegal activity among students will go to the Middle School as well.

“We’ve got to connect with these children,” Freeman said. “Another important thing is to get to the younger brother of an older gang-banger before he has the chance to make the wrong decision in life.”

One adult male in the audience admitted to being a gang member at one time. He offered to speak with students in an effort to make them understand of the pitfalls of such a lifestyle. Another audience member introduced himself as a retired Federal Investigator. He also volunteered to speak with young people, letting them know there are repercussions for their actions, especially when it comes to applying for a job in the future.

There was another audience member that works with a mental health agency, one offering home-based intervention programs to help families dealing with such issues as discussed at the meeting.

Another member of the audience said he had spoken with local youth and they said they are bored and looking for something to occupy their time. He asked about the possibility of developing recreational opportunities for youth.

“All of this dialogue is healthy; we will advance with these ideas at our next meeting,” said Stackhouse.

Dr. Perry closed the meeting by saying, “I’m impressed by what I’ve heard; this is a group that meets and things happen. This is home for me and you. I care about you and your children. This is just the start of what we’re trying to accomplish. This is not a school issue; this is not a church issue; this is not a business issue; it is our issue. We need to look down the road and ensure the safety of each and every soul, young and old, living in this county.”

Two additional community forums are on tap in Winton and Ahoskie. The dates, times and places have yet to be announced.

How low will it go?