From a windstorm to a snowstorm…welcome to the wild, wacky world of weather in the Roanoke-Chowan area.

There were reports of minor damage across the local four counties on Saturday night when, as expected, a cold blast of wind ushered in an arctic cold front that kept the Sunday’s high temperature in the mid to upper 20’s. 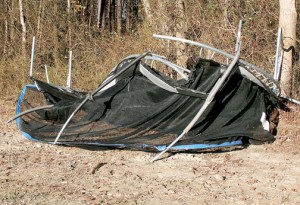 This trampoline was no match for Saturday’s wind gusts as it was swept from the backyard of a Northampton County home and into the edge of a field. Contributed Photo

From fallen trees across local roadways – two that struck vehicles in Gates County – to damaged outbuildings, trampolines that turned into flying missiles, to a destroyed marquee at the Ahoskie Inn, Saturday’s stiff and steady winds did reek havoc locally.

Wind gusts were reported between 40-to-50 miles per hour on Saturday night. One weather reporting station in the Ashley’s Grove area of eastern Northampton County registered a peak gust of 51 mph.

“The wind did cause some trees to fall across some of our roads,” said Northampton County Emergency Management Director Ronnie Storey Jr. “Most of those were, old, rotten trees. It didn’t take much of a wind gust to knock them over, but they were cleared from our roads almost as quickly as they were reported.”

Gates County Emergency Management Director Billy Winn reported that two vehicles, one traveling on Boonetown Road (off US 13 in the northern part of the county) and the other on Harrell’s Church Road in the Gatesville area, were struck by trees toppled by the strong wind.

“Fortunately, there were no injuries in either incident,” Winn said.

Winn also reported a few outbuildings in the county were damaged by fallen trees.

Other than the wind shattering the roadside marquee at the Ahoskie Inn, Hertford County Emergency Management Director Chris Smith said he was unaware of any other significant damage in his area.

Bertie County Emergency Management Director Mitch Cooper said a wind gust knocked down a power line, sparking a small fire. He also reported power outages in the Kelford and Lewiston areas, as well as Windsor, due to the wind.

As far as this week’s winter storm, the National Weather Service is predicting between 2-to-4 inches of snow across the Roanoke-Chowan area Monday night into Tuesday morning.

The forecast called for the weather event to begin as all snow, changing over the sleet and freezing rain. Ice accumulation is predicted to be between one-tenth and one-quarter an inch.

“Whatever we do get Monday night into Tuesday morning, it isn’t going to melt any time in the short-term future as cold temperatures are in the forecast all week,” said Smith.

Tuesday’s high is predicted at 31 degrees with an overnight low in the mid teens.

“I would strongly advise the citizens of our local area to stay off the roads once the inclement weather hits later on Monday, and to check the roads in your community before heading out on Tuesday,” said First Sgt. Mike Warren of  the North Carolina Highway Patrol’s Troop A / District II office in Ahoskie. “If you are out, I would advise you to slow your speed and keep a good safe distance between you and the vehicle you may be following.”

To check the status of road conditions, motorists are asked to go to the Department of Transportation’s website at www.ncdot.gov/travel/. The public is not advised to dial 911 or the Highway Patrol Communication Centers for road conditions.

“We may wind up seeing a bit more ice out of this storm, if the earlier forecast holds firm,” Cooper said on Monday. “Our biggest concern is with the ground already frozen from sub 32 degree weather over the past couple of days, whatever does fall will stick and will begin to do so immediately. With the icy conditions expected on the roads, we are making preparations well in advance.”

After another daytime high in the low 30’s on Wednesday, another re-enforcing shot of cold weather is in the forecast Wednesday night where it may reach single digits. There is another shot of snow showers on Wednesday.

It may be near zero on Thursday night. Daytime highs on Thursday and Friday are forecasted in the low 20’s, despite ample sunshine both days.

Other cold weather-related travel tips are:

Clear all windows on your vehicle prior to travel – having unobstructed vision is vital to avoid running off of the road or having a collision.

Use caution on bridges and overpasses as they susceptible to freezing before roadways. Avoid using cruise control – cruise can cause the vehicle’s wheels to continue turning on a slippery surface when speed needs to be decreased.

Ensure your vehicle has a full tank of gas in the event you are stranded for an extended period of time.

Charge your cellular phone prior to departure.

Notify a family member or a friend of your travel plans prior to departure – if you travel is interrupted, someone will know.

If involved in an accident requiring emergency response, be reminded that winter weather increases response time and that such weather causes local emergency responders to experience a higher volume of calls.

Drivers involved in minor, non-injury traffic collisions can attempt to move their vehicle out of the roadway, especially if you are in a dangerous area such as a curve or a blind hill. If your vehicle is stranded or wrecked but not in the roadway, attempts to recover your vehicle will have to wait until conditions improve for safety considerations.