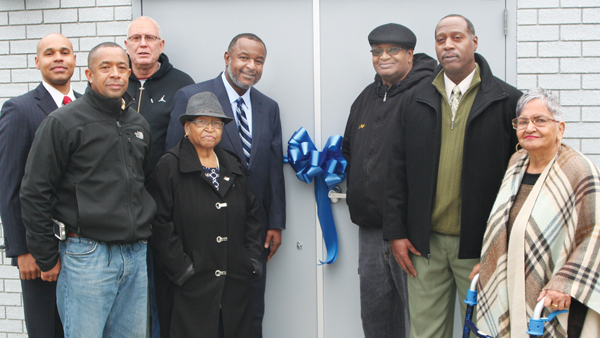 After some six and a half years on the county water system, and wishing for a return to their own, residents in the town of Cofield will begin using their water system again starting next week.

Thursday, town officials – past and present – were on hand for the ceremonial ribbon-cutting and dedication of the new system, along with representatives from the US Department of Agriculture Office of Rural Development.

Thanks to funding from the American Recovery and Reinvestment Act (ARRA), the town invested over $1 million for the installation of two new water supply wells, water storage tank, generators and telemetry system. The new system allowed the town to meet state regulatory requirements as well as their potable water needs.

Originally, the town received an ARRA grant of $462,000 through the work of US Congressman G.K. Butterfield (D-NC). The town then combined those funds with a $543,000 loan to complete the project.

The original wells were eventually removed: one failed because of sand infiltration and the North Carolina Department of Environmental and Natural Resources (NCDENR), Public Water Supply, required that the second well be shutdown due to iron levels that exceeded State standards.

“As mayor, and on behalf of the Town Council and our citizens, I’d like to thank everyone who helped in the planning and creation of this drinking water project,” said Mayor Hermea Pugh at the dedication. “These new components to the water system will provide our citizens with safe drinking water and serve the town of Cofield for many years to come.”

Pugh also thanked USDA Rural Development, Congressman Butterfield, Municipal Engineering Services of Garner, and HertfordCounty for what they provided to the town over the past six-plus years.

“They have all assisted us from the conceptual-planning through grant and loan applications into design and permitting of this project through its construction,” Pugh added.

“Finally this day has arrived,” Pugh said loudly as he wielded the scissors to cut the ribbon on the well-house. “It has been a dream and all you have to do is believe in the Lord and all your dreams will come true.  It finally has, and I just say thank you, Lord”.

The water system will serve approximately 182 Cofield residents, but there is enough reserve to service 400 more.

“We hope with this that Cofield will continue to grow,” the mayor concluded. 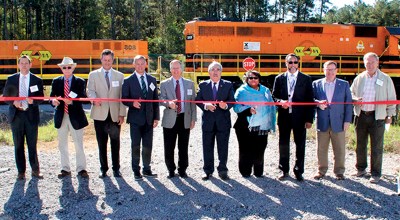