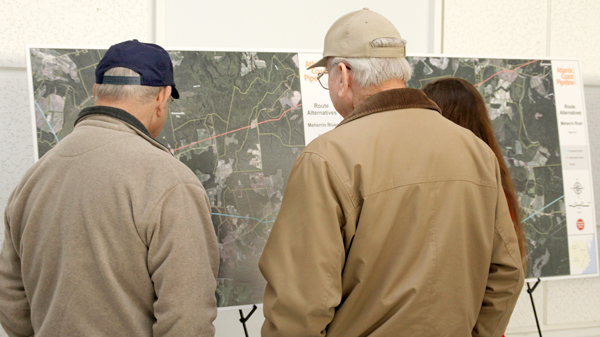 Property owners study a map of the proposed route of the Atlantic Coast Pipeline through Northampton County at a January workshop hosted by project officials in Jackson. Staff Photo by Cal Bryant

As plans further develop for a 550-mile natural gas pipeline across three states, Dominion Energy has announced the findings of a study that boasts of an estimated $349 million in annual savings to consumers of electricity.

Meanwhile, the proposed project, which will pass through a portion of Northampton County, has the potential to help meet critical infrastructure needs via taps along the Atlantic Coast Pipeline (ACP) that will boost localized economic development, as well as provide nearly 3,000 construction jobs over a five-year span.

During a telephone news conference held Wednesday morning, Dominion President Diane Leopold said the project may be the largest private economic growth driver in Virginia and North Carolina for the next decade. She said the numbers provided during the news conference were gathered through an analysis conducted by Virginia-based consulting firm ICF International.

“ICF says the pipeline, once it begins service to customers in 2018, could save consumers and businesses in Virginia and North Carolina an estimated $377 million each year in lower energy costs,” Leopold said. “The biggest benefactors will be Virginia and North Carolina electricity consumers. That’s because the largest use of the lower cost natural gas will be to generate electricity at new, highly efficient power generation stations in the two states. That means lower electricity bills for consumers and cleaner air too as the natural gas will be replacing coal-fired generation that is being closed due to new environmental laws.”

She said the savings will not be limited to electric bills. With a steady supply of gas supplied by the ACP, natural gas customers (residential, commercial, industrial) will benefit from savings as well through greater price stability.

“Local gas companies will have more of their product to deliver to historically underserved customers at lower prices,” she stated.

The ICF analysis also cited the savings realized for both energy sources has the potential to trigger stimulus growth. With lower energy costs, businesses may look to expand, meaning additional jobs.

“The report showed that more than 2,200 full-time, permanent jobs could be created in the two states because of the lower energy prices, creating $131 million in annual labor income,” Leopold noted. “The new jobs would come from businesses being able to reinvest their energy savings in growth and from business growth because of consumers having more disposable income due to the savings realized on their electric bills.”

Also, the report said Virginia and North Carolina could expect an annual average increase in the total economic output of the states of $218 million, and $23 million in average annual state tax revenue because of the estimated energy savings.

By facilitating the construction of new natural gas-fired electric generation, another 970 temporary construction jobs would be created.

Leopold said the cost savings, economic benefits and jobs resulting from the lower energy prices would be on top of the substantial economic benefits generated from the construction of the pipeline. An earlier study by Chmura Economics & Analytics said the two-year construction activity related to building the pipeline could inject an annual average of $456.3 million into the combined economies of West Virginia, Virginia, and North Carolina, supporting 2,873 annual jobs from 2014 to 2019. Another 271 permanent jobs related to the pipeline’s operational needs could be created.

She also mentioned a December news release concerning the taxes paid to counties and municipalities by the proposed pipeline would ultimately exceed $25 million a year across three states. Northampton County’s share of that money was projected to start at $39,500 in 2016 and increase year-by-year to $1.2 million by 2025.

Later in the news conference, Leopold fielded a question about the possibility of tapping into the pipeline, thus providing a vital piece of infrastructure needed for localized economic development.

“It’s certainly possible to tap into the pipeline throughout (the entire route) with agreements with ACP; it’s a federal open access pipeline,” Leopold said.

“We are still early into this process; we are still developing the best route,” added Chet Wade, vice president of Corporate Communication for Dominion. “When discussing the route, a lot of factors come into play, but I think interest in economic development is certainly one of the things with potential customers.”

Wade continued, “In the end you need to prove two things – first there is a public need as energy is a necessity of modern life; and then we need to show that we have chosen the best route. We are working with economic development authorities throughout the route and they’ve shown great interest (in the taps). But it’s not as simple as saying place a tap here. You need to first start with developing prospects for customers and future development. There is also a need to work with the local gas utilities that have franchises to operate in the area.”

Gary Salamido, vice president-Government Affairs for the North Carolina Chamber of Commerce, called the project a “game changer”, particularly for the eastern part of the state.

“The eastern part of our state has faced some significant challenges over the recent years,” Salamido said. “The development of additional natural gas pipeline infrastructure in our state, particularly in eastern North Carolina, will help us avoid the extreme energy price spikes that utility providers, businesses and consumers experienced during last winter’s polar vortex. This pipeline helps to fix that problem.”

From the construction side of the project, Brent Booker, secretary-treasurer for the North America’s Building Trades Unions, said his group is partnering with Dominion and others to build the pipeline.

“We see thousands of construction careers,” Booker said. “This project will provide living wages for our contract partners.”

He added that there were other economic benefits as well. During the construction process there will be an increased need to house workers at local motels and that those individuals will also spend money at local restaurants along the route.

Booker also promised that some of the construction jobs will be filled by local individuals.

“We have local hire requirements with our contractors on this project,” he said. “We will work with local community partners where apprentices can be developed to work on this project.”

ACP is a major interstate natural gas pipeline construction and operation initiative proposed by Dominion Resources and three other major U.S. energy companies – Duke Energy, Piedmont Natural Gas, and AGL Resources. The project involves constructing about 550 miles of natural gas pipeline, as well as three compressor stations and other associated facilities across three states—West Virginia, Virginia, and North Carolina. The compressor station for North Carolina is projected to be built in Northampton County.

The plans also call for a lateral extension off the main pipeline to Chesapeake, VA. That line is projected to branch off near Pleasant Hill and the initial 12 miles will be constructed in Northampton County before turning northeast into Virginia near Branchville.

Total capital expenditures for this project are estimated to be $4.6 billion.

Loved in life and in death