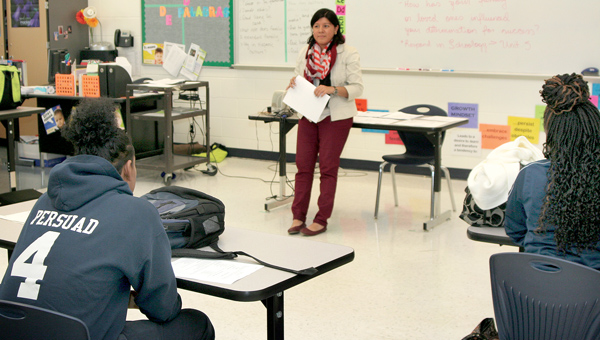 Spanish teacher Angela Rivas instructs one of her classes at Bertie STEM High School. Bertie STEM was one of five in the Roanoke-Chowan area to score a “B” on the NC School Report Cards released Thursday by the North Carolina Department of Public Instruction. File Photo by Gene Motley

On Thursday, a highly anticipated, but much maligned, accountability tool was released by the North Carolina Department of Public Instruction.

One day later, public school superintendents across the Roanoke-Chowan area were circling the proverbial wagons, left to answer questions from concerned parents, teachers and community partners in the wake of an unflattering report.

The NC School Report Cards (A-F grading system) offer a snapshot of some of the important information about individual schools, according to NC DPI. The School and District Report Cards are divided into five areas: the School/District Profile; Student Performance; School Indicators; School Environment; and Personnel.

Report Cards are provided for all public, charter, and alternative schools operating during the 2013-14 school year.

However, the majority of the R-C area superintendents say the new accountability tool doesn’t adjust for demographic differences. They point to the fact that only 20 percent of a letter grade is linked to how students improve over time on standardized tests. The lion’s share (80 percent) of the letter grade is based on student achievement measures: test scores, graduation rates, and advanced course participation.

In Hertford County, the grades range from a B at Hertford County Early College High School, where students earned a School Performance Score (SPS) of 84, to a pair of F’s at Ahoskie Elementary (39 SPS) and Hertford County Middle School (36 SPS).

“If I can use a football analogy: they’re trying to get to the 50-yard line,” said Dr. Michael Perry, Hertford County Public Schools Superintendent, referencing the students. “Some kids are starting in the end zone, some on the 10-yard line, others on the 20, etc.  Our students have further to go; they don’t all start at the same place.

“What this model does is it expects everyone to get to the same place at the same time and it does not take into consideration how much growth every student has to make,” Perry continued.  “For teachers across this state: when you institute a model that does not reflect how far they have brought individual students – when you don’t reflect the growth – then the model becomes a very hard task-master because it just does not include all of the things that go on in the instruction and performance of students, particularly in our county.”

Perry asked all parents of HCPS students as well as the school system’s community partners to look holistically at all schools.

“Our schools are families who are adjusting to changing standards, changing accountability models, and changing performance expectations. We do not view our environment as a handicap but as a challenge. Although we are not where we would like to be, we are making incredible strides in many areas,” he stressed.

“We did not reach our student achievement goals in our district for 2013-14,” said Northampton Schools Superintendent Dr. Monica Smith-Woofter. “We have much room for growth and improvement. We also recognize with our new academic re-focus this school year, we must ensure that the instructional experiences provided to our students are relevant, challenging and push our students to think more critically and solve complex problems.”

Smith-Woofter, who became Superintendent in July of last year, said that although many of the students were below state proficiency on the state assessments, the majority of Northampton teachers impacted student growth in a positive manner.

“According to the North Carolina READY Accountability report, this means that some of our students may not have scored proficient or above on state tests; however, they have a pattern of academic growth,” she noted. “Fifty percent of our schools met growth this past school year.  The expectation for our School Performance Grade for the 2014-2015 school year is to ensure that all schools meet or exceed growth expectations. In addition, every school is expected to receive a passing grade with an additional charge of increasing existing proficiency scores by a minimum of 10 percentage points.”

In Bertie County, the good news was that the STEM High School (with a B and an 83 SPS) and the Early College High School (B; 71 SPS) both faired well in the report. On the other side of that coin were two schools with F’s – Colerain Elementary (38 SPS), and West Bertie Elementary (35 SPS).

“The numbers posted in the Report Card show that we still have work to do, but they only tell part of the story,” said Elaine White, BCS Superintendent. “At Bertie County Schools, we are proud of the continued progress made by our students. We are working to prepare every student for a successful future and the new letter grades do not change our commitment to that goal.”

White stressed she was sure that people understand that schools cannot be accurately graded using just one measure.

“While test scores matter, they are not the only important measure of a school’s success. Ironically, 75% of our schools, including, some with lower grades actually met or exceeded state growth goals,” she said.

“We are very proud of our schools in Bertie,” White emphasized. “We invite anyone to look inside our annual report. We are confident that you will be impressed by what you see. That’s why, as a school district, we are going to stay focused on the goals and strategies we outlined in our strategic plan.”

White said that parents of Bertie County will receive a letter from their child’s school along with a copy of the 2013-2014 School Report Card Snapshot on Tuesday of next week.

“Parents are encouraged to contact their child’s school with questions and are always welcome to get involved,” White concluded.

The news was better in Gates County where two schools scored a B: Buckland Elementary (75 SPS) and Gates Co. High School (71 SPS). The remaining three schools registered a C and all five either met or exceeded expected growth.

“If the General Assembly voted to grade schools on a 50/50 split, instead of the 80/20, all of our schools would have scored A’s,” said Dr. Barry Williams, Gates County Schools Superintendent.

Williams said while there is always room for improvement, no matter the scores, he believes success starts in August with strong, strategic focus on the vision and mission for the school year.

“However, there are many obstacles that try to hinder our goals that are out of our control from the political level,” Williams observed. “Just as they did in 2012, 2013 and again in August of 2014, our teachers returned back to school with a motivational and educational convocation. Our focus targeted positive relationships, improvement and strategies for success.”

“Our county’s Board of Education has established relationships with our classroom educators, students, parents and all stakeholders throughout our community and values and respects our dedicated, hard-working and committed teachers. Gates County Public Schools letter grades reflect we are effectively educating our students,” he closed.

The North Carolina General Assembly approved the letter grade format in 2012, but it was met with opposition by school administrators and school boards from around the state.

It replaces an accountability model that assigned labels such as school of excellence, school of distinction, school of progress, priority school, and “low performing to all public schools in the state.

The breakdown of Report Card scores for Roanoke-Chowan area public schools is as follows: