Once a fireman, always a fireman 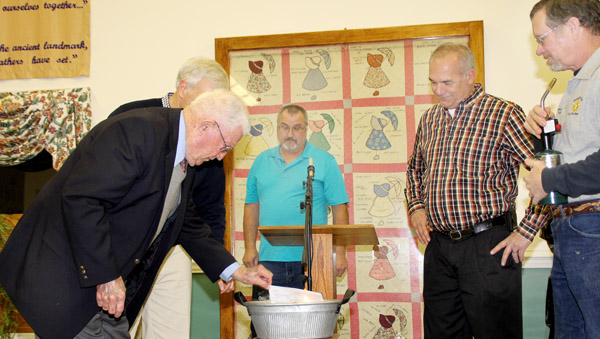 Buck Carter burns a loan note that the Powellsville Volunteer Fire Department paid off for a pumper purchased in 2010. Joining Carter are, from left, his son, Ernie (face hidden from view), and PVFD officers Herbie Tayloe, Ralph Brinkley, and David Powell. Staff Photo by Cal Bryant

POWELLSVILLE – Over its 58-year history, the Powellsville Volunteer Fire Department (PVFD) has seen only two men wear the “Chief’s” helmet.

One of those leaders has now officially retired.

At a gathering here Saturday night in the Fellowship Hall of Powellsville Baptist Church, current-day PVFD members were joined by community leaders, family and friends to honor 87-year-old E. Rawls (“Buck”) Carter, the department’s founding Fire Chief and one of its charter members.

It was Carter, then a businessman in the town, who went to Raleigh to get the PVFD’s first truck, a surplus military vehicle that he and others converted into a fire truck. 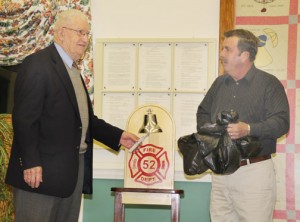 Buck Carter rings the bell of a gift given in honor of his 57 years to the PVFD. At right is PVFD member David Harrell. Staff Photo by Cal Bryant

Carter stepped down as Fire Chief in 1979 due to health issues and David Powell took over the reins, and remains in that position today. However, Carter continued to be an active member of the fire department up until his November retirement, and was often the first man to the station to get the trucks rolling.

“Buck Carter had a dream that Powellsville needed a fire department. He and others joined together, got a fire truck, and the rest, as they say, is history,” said Powell at Saturday night’s event.

When Powell noted that Carter had officially retired in November of last year, the former Chief interjected that he had retired on two previous occasions….“But I stuck around,” he chuckled.

“We appreciate everything Buck has done and has meant to this fire department,” Powell said. “Personally, no matter how many times I’ve asked him a question or asked for his advice, he always responded.”

In honor of his 57 years in the PVFD, Carter was presented with the official emblem of the department (Station 52) on a wooden plaque, complete with a bell. PVFD fireman David Harrell made the presentation.

Carter recalled the early days of the department, back when their only piece of firefighting equipment was a retrofitted US Army surplus vehicle.

“We’ve come a long way,” he said. “The only new fire truck we purchased while I was Chief was a 1972 Ford pumper. Just look at us now, a nice fire station with fire trucks that are paid for. I really appreciate ya’ll thinking of me tonight. It means so much to me.”

“When you think of the words to describe Buck Carter, you come up with many adjectives,” said the Rev. Walter Johnston, pastor of Powellsville United Methodist Church.

Johnston recalled a sermon he recently delivered, one centering on “service leadership.”

“Jesus Christ set down an example for us to follow, to be both a servant and a leader, in our homes, in our churches, and in our community,” Johnston stated. “And when I stop and think about Mr. Buck, the words servant and leader are very applicable. He saw a need for this community and filled that need. He knew that this community, although small, needed a fire department just like everyone else had. He took the bull by the horns and he became a leader and exemplified service leadership.”

Johnston, as Carter’s pastor for the past nine years, also sees his service leadership displayed within the church.

“I’ve witnessed that in our church and can relate that to what he accomplished for this fire department,” Johnston noted. “And if any of you will listen around five minutes ‘til nine every Sunday morning, you’ll hear Mr. Buck ringing our church bell.

“It’s an honor for me to call Mr. Buck my friend, and call him a fellow Christian….we love you and we thank you for what you’ve done,” Johnston concluded.

“When you see a man of the stature of Buck Carter, we think of the story of a preacher walking along the street where he sees four young men loitering on the corner,” Asbell began. “He invites them to church, and they later became the nucleus of a Sunday School class. Later in life, that preacher was honored for his work and those boys, now men, were invited. One was a missionary to China, one was the president of the Federal Reserve Bank, one was the private secretary to President Herbert Hoover and the fourth was President Hoover himself.

“It doesn’t matter what we see when we first meet people; that preacher saw four young men that were probably hungry to learn,” Asbell continued. “He only showed them the way; they did the rest. That’s what Buck Carter has done for our community and he’s done it on many occasions. He planted the seed – he nurtured it and loved it – and look tonight to what that seed produced, a giant tree that is the Powellsville Fire Department of today. Mr. Buck will always be a part of this growth. We love you and thank you for everything that you’ve done.”

The evening also included a note burning celebration as the PVFD has paid in full a loan secured in 2010 to purchase an E-One Class A Engine/Pumper. Joining Chief Powell in that ceremony were Carter, Assistant Chief Ralph Brinkley, PVFD Captains David Drew and Herbie Tayloe, and department secretary Ernie Carter.

In 2010, PVFD gained a $70,000 grant and loan ($71,000) from the United States Department of Agriculture’s Rural Development division to purchase that truck. They repaid the loan in a shade over four years. Buck Carter was presented the honor of igniting the fire under the note.

Merrill Waters, President of the PVFD Board of Directors, said the department has a lot to be proud of over its 58 years.

“This is a special occasion for us, to celebrate all we’ve been able to accomplish,” Waters said. “What a lot of people don’t realize is the State of North Carolina Insurance Department requires of a fire department. I can remember when we invested a lot of money for new uniforms. Not long after we made that investment, the state changed the requirements of a fireman’s uniform, and we had turn around and buy new uniforms again.

“For us to maintain our (fire) rating for insurance purposes, we need to have two Class A pumpers,” he continued. “At one time we had three Class A pumpers, but were spending a lot of money to keep them maintained, just in case one broke down so we’d still have two in service. So, the good Lord blessed us….we won that national (E-One) contest (in 2009, and gained the keys to a free pumper) and then we turned right around and purchased another new pumper. But that set us up for the long run. Because of the relatively two new fire trucks, we’re better off financially today than we’ve ever been as a department.”

Waters said that feat has been reached through not only the hard work of the PVFD, but the community as well.

“We’ve accomplished this together,” he said.

Today, PVFD boasts of 33 active volunteer members. They serve a 75 square mile district plus are mutual aide designees for five other volunteer departments. The department survives on fundraisers and a county annual budget of $10,000. But, most of all, it survives on the work ethic handed down through the generations by Buck Carter.