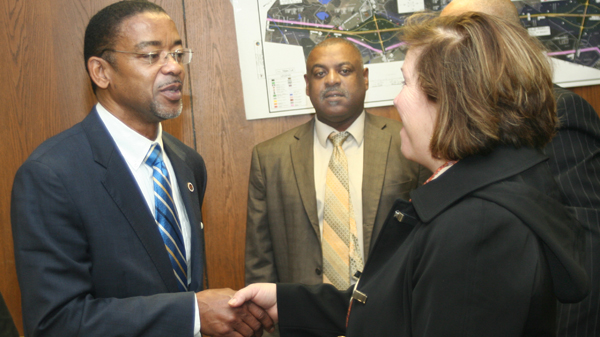 With his wife, Margaret, and his daughter, Paige, holding the family Bible, Lewter was administered the oath by Senior Resident Superior Court Judge Cy Grant.

Afterward, he took his seat at the semi-circle of Commissioners and was warmly praised – and welcomed – by his fellow board members.

“We know that based on your reputation you will represent this county well with your service,” said Commission chairman William “Bill” Mitchell. “Your prior service in local government will be an asset here on this Board.”

Lewter served 13 years on the Hertford County Planning and Zoning Board, and has been its chairman for the past six.  His public service record also includes time on the board of directors of Partners for Hertford County Schools.  He is also a member of the Hertford County High School Athletic Association and a staunch supporter of athletics among the county’s youth.

Lewter is a resident of St. John’s and noted that prior public service has prepared him for filling Hunter’s unexpired term.

“I feel my biggest attribute is the fact that I’ve lived in Hertford County all my life,” he noted, before a large group of supporters that included members of his New Ahoskie Baptist Church family. “I understand the people here because of this and I’m looking forward to serving the citizens of this county and working alongside the other commissioners for the betterment of our county.”

Fellow commissioners, Vice-chairman Ronald J. Gatling, Johnny Farmer, and Curtis Freeman echoed Mitchell in their praise and welcoming remarks about Lewter’s inclusion on the board.

Lewter’s name was among six candidates to fill the vacant seat presented to the Commissioners by the Executive Committee of the Hertford County Democratic Party (HCDP) following the Party’s Jan. 15 meeting.

In filling Hunter’s unexpired term, Lewter will serve out the two remaining years of office before deciding whether or not to seek re-election on his own.

Hunter was in attendance at the swearing in and praised the board, his successor, and vowed to fight as vigorously for Hertford County’s interests in Raleigh as he has done here in the county.

“I miss it (the Commissioners) for now,” Hunter joked, “but I haven’t been in Raleigh that long yet, either.”

Meanwhile, Lewter pledged to work as diligently as his predecessor and always keep the interests of the county’s citizens as his first priority.