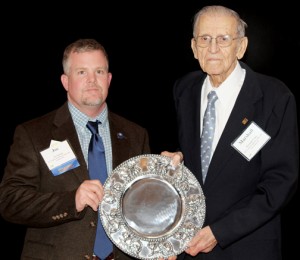 Grant served 10 years as Vice President of the North Carolina Farm Bureau before resigning and serving 20 years as Chairman of the State Farm Service Agency Committee. He was Treasurer of The Cotton Board, a State Director on the National Cotton Council and on the boards, commissions and committees too numerous to name in a single news release.

But Grant’s legacy will forever be his tireless determination as a central figure and driving force behind the effort to gain producer support for the BWEP across the Southeast – which was key to its eventual Belt-Wide passage, funding and implementation.

“The BWEP was historic in the timeline of our industry and the work Marshall did was instrumental in getting that effort off the ground. He realized for the program to be successful, broad acreage in general proximity over a short period of time would have to be controlled to keep boll weevils from merely migrating to adjacent cotton fields,” states David Parrish, CEO, North Carolina Cotton Producers Association.

For almost a decade, Grant traveled counties across parts of North Carolina to shore up producer support for tackling the boll weevil, prior to being approached to become part of a national effort.

“I remember the day I was sitting on my front porch when Dr. J.R. Brazzell, former Head of the Entomology Department at Mississippi State University, before taking a position with USDA, walked up to me and asked if I would consider helping him,” remembers Grant.

The BWEP, which is heralded as one of the most successful USDA-backed programs ever implemented, eventually helped producers across the Cotton Belt significantly reduce pesticide applications, made Integrated Pest Management (IPM) a standard for many farming operations and paved the way for decades of positive yield trends.

“Our board thought it appropriate to establish an award that would recognize someone in the North Carolina cotton industry only when their efforts were so impactful, that they made significant and broad-sweeping improvements across our industry. I think anyone would agree, Marshall’s efforts have done just that,” concludes Parrish.

The name for the award, “White Gold”, was chosen to reflect not only the importance cotton has played in the economy of the United States through history, but the level of achievement reached by the recipient.