WINDSOR – It’s not 1,000 like Coach K, but still very much worthy of celebrating.

To be precise, Lyons now has 705 wins.   The latest victory came after the Lady Falcons claimed a 58-14 win over the visiting Panthers. 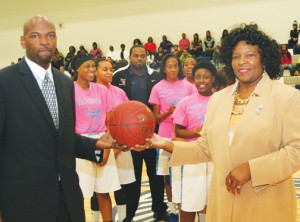 “We worked on a lot of things tonight, offensively and defensively,” Lyons said.”The kids did what I asked them to do and I’m very proud of all of my kids and all of my wins.”

Bertie scored the first 10 points in a row in what would become a rout and probably one of the easiest wins a Lyons-coached team has ever registered.  As usual, their full-court press was the most effective and it was nearly five minutes into the game before Janaya Lynn scored Pasquotank’s first points on a put back with 3:12 left in the first quarter.  The Lady Panthers got another put back, but Bertie still maintained a ten-point lead at quarter’s end, 14-4.

The second quarter looked like déjà vu, as Bertie this time scored 11 unanswered and by now had a 20 point lead, 24-4.  At the 3:56 mark, Pasquotank broke through once more when Lynn made one-of-two free throws.  Jones later made a free throw as the Lady Panthers went without a field goal from the floor the entire quarter and trailed 31-6 at halftime.  Porter had led the Bertie charge with 13 points in just the first 16 minutes.

Bertie’s execution was not as sharp in the second half, but Lyons did a good job of maintaining the team’s focus with such a huge lead. Pasquotank couldn’t seem to get anything to click, again held scoreless from the field and scoring just five free throws on the scoreboard.  Bertie finished the quarter with 45 points, most of the 16 they scored coming as part of their nine-point run midway through the period.

By the fourth quarter, Lyons had cleared the bench, but the starters still were able to get their stats.  Several Lady Falcon combinations demonstrated the team was this time listening to their coach’s instruction.   Pasquotank did manage to score their first field goal since the first quarter, a three-pointer with less than two minutes left to play. In the end, Bertie won their fifth game in Northeastern Coastal Conference competition against no losses, and 14th overall in taking the 58-14 victory.

The Falcons host Edenton tonight (Tuesday) before a pair of road games: their first meeting with First Flight on Thursday and at Hertford County on Saturday evening.