MURFREESBORO – Following a seven-hour manhunt, a local man wanted for brandishing a firearm in the parking lot of the McDonalds here early Monday morning, prompting the lockdown of several schools, has been arrested.

Melvin Eugene Rodgers, 32, was taken into custody at a residence in Bryantville Park near Como around 1:30 p.m. Monday.  He was charged with possession of a stolen firearm, and possession of a firearm by a felon. Rodgers was jailed under a $50,000 bond. 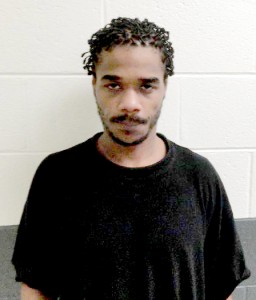 Hertford County Sheriff Juan Vaughan said Rodgers was also wanted by Portsmouth, VA lawmen on the charges of misdemeanor assault on a family member, and felony abduction and kidnapping.

Murfreesboro Police Chief Darrell Rowe said Rodgers was tracked to the Bryantville Park area and initially refused to come out of a residence there.

“We had the residence surrounded and he later came out on the front porch at which time he surrendered without incident,” Rowe said. “We are pleased that this event ended without anyone injured.”

The Murfreesboro Police were summoned to McDonalds at around 6:30 a.m. Monday where there was a report of a confrontation in the parking lot between two men and that a weapon was involved.

Upon the arrival of the Murfreesboro Police, Rodgers reportedly fled across the street and was last seen in the area of the ABC Store on North Main Street.

At that time, with the belief that Rodgers was armed, Riverview Elementary School, Hertford County Middle School, and Chowan University were placed on lockdown.

“The Ahoskie Police brought one of their dogs and he eventually tracked the suspect right to the steps of the residence where we eventually located Mr. Rodgers,” Rowe stated.

Rowe added that Rodgers was a former resident of Murfreesboro who has been living in Portsmouth, VA.

“I would like to thank all the agencies that responded and helped us locate this individual,” Rowe said. “I also need to thank Hertford County Public Schools and Chowan University for their swift reaction to the series of events that were unfolding in our town Monday morning and securing the safety of their students and staff by placing their buildings on lockdown.”

Rodgers has a criminal history, to include brief stints in jail in Hertford and Bertie counties dating back to 2001. According to information posted on the NC Division of Prisons website, Rodgers was previously arrested for common law robbery (2001), communicating threats (2005 and 2008), felony breaking and entering and larceny (2005), injury to personal property (2008), 2nd degree trespassing (2010), and resisting a public officer (2010).