WINDSOR – They will still “protect this house”, only this time they will do it in a bright, new color scheme.

Now in 2015, Bazemore has gone one better with new home and road uniforms for the boy’s varsity team which were unveiled at the new BHS gym here on Thursday. 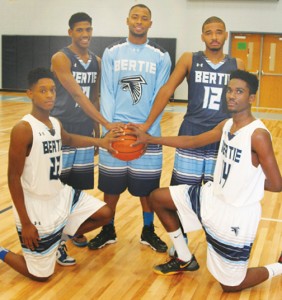 The design, in both home-white and road-royal blue, features the word ‘BERTIE’ in large block letters on the front of the jerseys above large block numbers, with only numbers on the backs.   The shorts are highlighted by a striped bumble-bee pattern in celeste (sky, or Carolina, blue) blue located above the knee hem with a Falcon emblem located on the sides.  The pattern is reversed on the darker blue road shorts.

Bazemore also outfitted the team with new long-sleeved warm-up jerseys featuring BERTIE on the front above a large Falcon logo.

“I like them,” said senior forward Tydre Lee. “They’re light-weight and comfortable.  I really want to thank Kent for doing this because we really needed some new uniforms bad.”

Bazemore’s mother, Glynis, was on hand at the school gym for the unveiling/modeling which the players did on Thursday.

“It’s another gift, a gift from his heart,” she said. “This was all part of his new contract for this year, and he wanted his team to receive them.  I don’t know if this is a one-time thing or not, but he will be giving more in some form each year.”

Bazemore was originally signed as a pro by the Golden State Warriors in 2012 after an All-American career at Old Dominion University in Norfolk.

Bazemore spent much of his first season-plus with the Warriors, bouncing between the D-League and the NBA franchise, and became a fan favorite for his enthusiasm from the bench. Bazemore brought that same energy to the floor midway thru last season when he got his opportunity after being traded to the Los Angeles Lakers. Atlanta, one of the hottest teams now in the NBA, use Bazemore as a two-guard off the bench hoping that he can be a spark for them off the bench behind Kyle Korver.

“He’s excited about this,” Bazemore’s mother continued. “He wants the kids to know that it took hard work for a kid from Kelford who played here at BertieHigh School and now is able to contribute it back.  I want people to see how much he loves his community and loves his school.”

Calvin Moore, principal of Bertie Early College, and Bazemore’s last high school coach before he was recruited to ODU by another former Falcon, John Richardson, Jr., was also on hand and pleased with what the new team will wear on the floor.

“I’m grinning like a Cheshire cat because it’s great when your kids have a platform like this and can give something back,” Moore said. “When Kent was here he wore the same uniform for all four years, but when you can put on something new you can really appreciate it.  When you come from a small area and you still remain connected to your past it’s really great.  Kent was not the type to forget, good people do good things.”

“We might even get some new team shoes,” Hayes said. “Then we will be able to break it all out together.”