WOODLAND – Despite the passage of over one-half century, Joyce Powell Parker remembers Jan. 11, 1963 like it was yesterday.

Parker, who now resides in Ahoskie, was living with her family in Woodland at that time. Joined by her five-year-old sister, Phyllis Lorrain Powell, the girls were washing clothes at the home of a neighbor, Molly Lassiter, when little Phyllis asked her older sibling for permission to go outside and play. 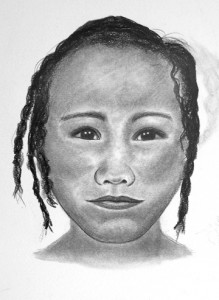 Diana Trepkov of Canada, a Certified Forensic Artist, created these likenesses of Phyllis Lorrain Powell as a child and as an adult.

“I never thought that would be the last time I would see my little sister,” said Parker of that fateful day 52 years ago.

Phyllis disappeared at around 12 noon that day while playing in the area of NC 35 and Ashe Street in Woodland. Despite a massive search on the ground and in the air involving over 200 individuals, there were no clues discovered on the little girl’s whereabouts, other than a set of small footprints found in an area bordered by a thick woods about one mile from where she went missing.

Now 52 years and a lot of unanswered questions later, members of the Powell and Vinson family are still asking what happened to Phyllis Lorrain Powell?

“I’ve asked myself that question so many times over the years,” said Parker. “This was a street where she knew everyone by their name. As a matter of fact, everyone living on that street back then was either members of our family of were close friends with our family.”

In 1963, Ashe Street was known as Back Street. But no matter the name, Parker’s heart has weighed heavy since that dark day in the lives of her family. 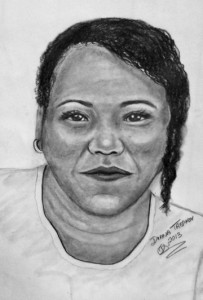 “Phyllis was with me that day when we went over to Mrs. Lassiter’s house,” Parker recalled. “It was a very warm day for January and Phyllis asked if she could go outside and play. I didn’t see any reason she couldn’t go outside….after all, the street at that time only had eight houses on it and you could see from one end of the street to the other. A man could throw a baseball from one end to the other.”

Parker said despite her sister being only five years old at that time, she was extremely smart for her young age.

“Phyllis would have never got in a car or went anywhere with a stranger, not unless she was forced to do so,” Parker stressed.

“Joyce knew it wouldn’t be a problem because of the area that Phyllis was going to play was surrounded by houses owned mostly by family and friends,” said brother William “Buddy” Powell who still resides in Woodland. “Little did Joyce or any of us know that within an hour Phyllis would be gone; she just vanished. To this day all I’ve ever wanted is to find out what happened to my little sister.”

Despite the agony suffered by the Powell-Vinson family for the past 52 years, they harbor no ill will towards the person or persons responsible for their loved one’s disappearance.

“I have never wanted anything but the truth,” said Parker. “I feel the pain of other people that have loved ones who have gone missing and haven’t been found. I don’t want whoever is responsible for my sister’s disappearance to be punished.

“God sits high and looks low,” she continued. “He sees and knows all. One day, whoever is responsible will have to stand before God and will be held accountable for every deed done in your body, whether it’s good or bad. It’s better to get it right here on Earth because you sure can’t get it right up there as God will be the final judge.”

“To whoever is responsible for what happened to our sister, my family has no hate in our hearts for you,” Buddy Powell stressed. “No matter what happened we forgive you, but please understand that we need to know what happened.”

He added, “To carry this weight in your heart for over 50 years, that has to be hard. So we ask you to take this weight off your heart. The Bible tells us that the truth gives life and the truth will set you free.”

The well-publicized cases of Daniel Moses and Shawn Alston – two Northampton County men who have been respectively missing since June 16, 2011 and Oct. 18, 2012 – strike the heart and soul of Parker.

“I say to the families of those men, and others, I’ve read about in the papers, don’t give up,” Parker said. “I pray that it will not take 52 years for ya’ll to get answers. We pray for your family and ask that you pray for our family. God bless you all.”

A few years ago there was a ray of hope for the Powell family. DNA tests performed on Buddy Powell and his brother, Joseph Powell, came on the heels of a cold case involving human bones discovered decades ago in the northwestern part of Northampton County. However, those tests did not reveal a DNA match.

Meanwhile, a Winston-Salem woman, Betty Brown, began showing interest in the Powell case. As a member of a family with a missing relative of their own, Brown played a pivotal role in getting the DNA tests performed. Brown also contacted the Powell family about using advanced technology to perform another ground search of the area around where Phyllis went missing.

Two years ago, on the 50th anniversary of Phyllis’s disappearance, Diana Trepkov of Canada, a Certified Forensic Artist through the International Association for Identification, became involved in the case. Based upon recollections by the family (there were no known photos of young Phyllis), Trepkov penned a likeness of Powell at age 5 and then an age progression likeness at age 55.

Trepkov caught a flight to Wilmington, NC where she met Lori Roberts of the Community United Effort (CUE) Center for Missing Persons, the organization that footed the bill for the artist’s trip from Canada. That duo drove to Woodland to meet with Buddy Powell and Joyce Powell Parker. After five hours of painstaking work, which also involved speaking with the Powell family and soliciting their recollections of what their little sister looked like back in 1963, Trepkov created Phyllis’s likeness.

Trepkov has been involved in over 100 law enforcement cold cases throughout Canada and the United States which involved her forensic artwork techniques such as composites, 2D and 3D facial reconstructions, postmortems, surveillance video drawing and age progressions. More recently she helped solve four high profile cases in the USA.

In October of 2013, CUE officials met with members of the Powell-Vinson family in Woodland at the Phyllis Powell Memorial Garden to share their memories and bring renewed attention that will hopefully shine new light on this missing person’s cold case. That event was part of the CUE’s annual “On the Road to Remember Tour.”

According to Monica Caison, CUE’s Founder, the “national road tour is an awareness campaign that focuses on missing persons cases that have gone cold or that have not received appropriate media coverage on the local level.  This tour provides that attention.”

“After so many years, these cases fade from the public’s radar, but for the families and friends of a missing person, the nightmare continues — every minute of every day their loved one is absent,” said Caison two years ago. “Every missing person is somebody’s child.”