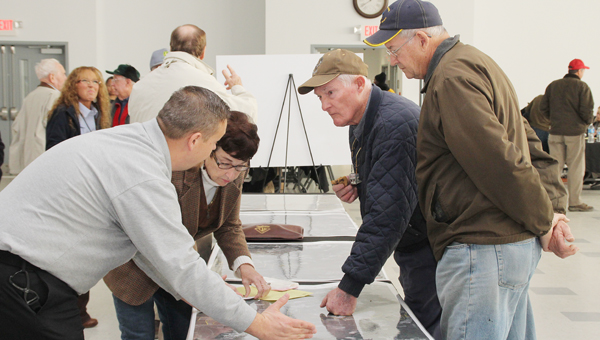 Landowners along the main line of the Atlantic Coast Pipeline study the project maps at a public meeting held last week at the Northampton County Cultural & Wellness Center. Staff Photo by Cal Bryant

JACKSON – A major change is currently in the works for a lateral extension off the Atlantic Coast Pipeline (ACP).

While there have been some slight modifications along the main route Dominion plans to take for the 550-mile ACP, the company has shifted the lateral extension more into Northampton County as it snakes its way eastward to Chesapeake, VA.

At a scheduled public meeting on Thursday at the Northampton County Cultural & Wellness Center, landowners and other interested parties were able to view maps of both the main route of the pipeline as well as the new Meherrin River Route Alternative. 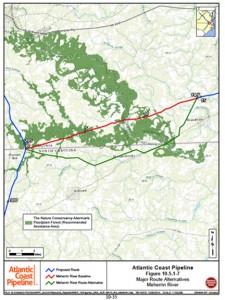 This map, courtesy of Dominion, shows the new route (in green) of the Meherrin River Alternative, part of a lateral extension of the main natural gas pipeline that will stretch across 12 miles of property in northern Northampton County en route to Chesapeake, VA.

Original plans called for the lateral extension off the main pipe to be constructed entirely in Virginia as it made its way east-northeastward across Greensville and Southampton counties, and the City of Suffolk en route to a natural gas terminal in Chesapeake, VA.

However, due to environmental concerns within the floodplain forests of the Meherrin River and Fountains Creek watersheds, the first 12 miles of the lateral extension will stretch across the northern portion of Northampton County.

“This came about after consultations with the environmental agencies,” Dominion’s Bob Bisha told the Roanoke-Chowan News-Herald at last week’s meeting in Jackson.

TNC states that the Albemarle Sound system contains “areas of large intact wetland forest that support high levels of use by migratory and breeding birds and buffer some of the best migratory fish spawning and nursery habitats on the East Coast.”

“The alternative route does not significantly decrease the amount of wetlands crossings, but it does avoid construction within the Fountains Creek swamp area that The Nature Conservancy identified as a critical habitat area,” said Dominion’s Pat Robblee. “By dropping just a little bit to the south, we get out of that watershed and the habitat area. We also have the opportunity to parallel the lateral extension pipeline along the right-of-ways of some existing utilities, to include an electrical transmission line and the railroad where it crosses the Meherrin River at the state line. We will not have to create a new corridor to cross the river.”

At last week’s meeting, Northampton County Public Works Director Jason Morris was interested in the new route of the lateral extension. He closely studied the maps, saying the pipeline would basically follow a path on the south and north sides of Big Johns Store Road. It will remain north of Margarettsville, eventually crossing south of NC 186 (and the CSX rail line) to avoid the Glover Construction sand pits. It turns back in a northeast direction, prior to reaching Branchville, VA, and crosses the state line north of Hugo Road.

As far as the route of the main pipeline, Dominion officials are saying there are some minor changes to the path.

It was in September of last year when Dominion announced its plans to partner with Duke Energy, Piedmont Natural Gas, and AGL Resources (Atlanta Gas & Light) to construct a $4.5 billion natural gas pipeline. The ACP will originate in Harrison County, West Virginia (tapping into the Utica and Marcellus shale basins in West Virginia, Ohio and Pennsylvania) and end in Lumberton, NC.

Michael A. Thompson, Manager of State and Local Affairs for Dominion North Carolina Power, called the ACP project, “one of the biggest we (Dominion) have ever undertaken.”

“This pipeline will provide an improved supply of natural gas for utilities looking to meet the new EPA clean air regulations by using natural gas to generate electricity rather than other fuel sources,” Thompson said. “We also have noted that local distribution companies are searching for new, less expensive supplies of natural gas for its residential and commercial customers. This pipeline can provide that, as well as provide a reliable source of natural gas for local industries, and even new ones, to expand their operations.”

Thompson noted that due to the new EPA regulations, Dominion Resources was forced to close six coal-fired power plants. Among their options to replace coal as the power source to generate electricity is natural gas.

“We are energy starved here in eastern North Carolina….by that I mean less than two percent of the fuel used for the generation of electricity in North Carolina comes from North Carolina,” he stressed. “There’s no oil or gas drilling here; there’s no coal mines here.”

In North Carolina, the main pipeline will be constructed parallel to I-95 and US 301.

Crews have been surveying and obtaining information from affected landowners along the way to determine the best route with least impacts to the environment, historic and cultural resources.

While the proposed route of the main pipeline only covers nine miles of Northampton County real estate, one of the three compressor stations that will dot the landscape along its entire 550-mile route will be built near Pleasant Hill. The other two are planned in West Virginia (at the start of the pipeline) and in central Virginia (Buckingham County).

The pipeline would be designed, constructed, operated and maintained in accordance with FERC and U.S. Department of Transportation standards, and all other applicable regulations, standards and guidelines for safety.

All federal, state and local permits and right-of-way access will be obtained prior to starting pipeline construction.

Upon approval by the FERC, the joint venture would anticipate project construction in 2017 and 2018.

The range of normal operating pressure on the pipeline would be from 750 pounds per square inch gauge (psig) to 1,440 psig, its Maximum Allowable Operating Pressure. The pipeline would be designed with redundant safety systems to ensure this maximum pressure is not exceeded.