WINDSOR – It was ironic that on the week leading up to the NFL Dallas Cowboys’ first visit to Green Bay for a playoff game since the 1967 Ice Bowl that one of the key participants in that contest passed away. 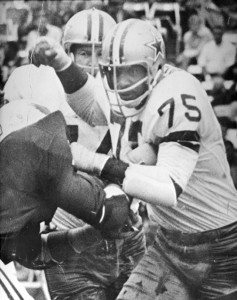 Jethro Pugh (right) is shown here during his playing days with the Dallas Cowboys. This game was against the old St. Louis Cardinals. Contributed Photo

“He was loved and appreciated by his teammates and Cowboys fans for decades, and his spirit will be felt when our team travels to Green Bay this weekend,” owner Jerry Jones said in a statement last week.

Pugh was a native of Bertie County, growing up in the Indian Woods community near Windsor.  An 11th round NFL draft pick out of “tiny” Elizabeth City State University, he went on to play 14 years with the Cowboys, the fourth-longest tenure in franchise history.

When Pugh matriculated to ECSU in the early sixties he met a fellow Physical Education major originally from New York who would eventually spend his professional life in Pugh’s birthplace.

Johnny Richardson is a retired educator who came to know Pugh’s people once he came to Bertie.  This included Pugh’s first cousin.

“We all went to school together,” Richardson recalled. “His cousin, Lillian Watson, was a cheerleader.  Her husband played with Jethro during the time we were at ElizabethCity. (Jethro) would come home often then, because he loved that home cooking, especially his Aunt Sara’s.”

Prior to ECSU, Pugh attended W.S. Etheridge School in Windsor, graduating in 1962.  People who knew him and his family that still live in Windsor – and some who have moved away – fondly remember the gentle giant.

“My mother was Luella Bell Swann”, said Derwin Swann. “She grew up in Windsor and attended Elizabeth City State. She would often tell my brother, sister, and I how she would laugh when she would see Jethro walking in Windsor as a young man with our grandmother, Claudia Smallwood Bell, because she was under 5 feet tall and he was well over six feet.  Mother said it was truly a sight to see.  I never met him, but we grew up and lived with the feeling that Jethro is family and we will miss him.”

“I grew up in Windsor, NC with Jethro and his family,” said William Smith of Windsor.  “His mother, my cousin Mamie, was a regular visitor at Henry and Whittier Rascoe’s home where I lived. Jethro was our local football hero when he went to ECSU and when he was drafted by the Cowboys we all became new Cowboy fans. I am still one.  To the end he was still the same as I knew him growing up in Windsor: kind, caring, and friendly. He was family and will be missed.”

Pugh grew up in Indian Woods Baptist Church, where the late Rev. C. Melvin Creecy was his pastor, and he never strayed far from his church roots, and he gave back as well.

“Not only were we his home church, but we have been the beneficiary of his generosity for many, many years” said Indian Woods member Gloria Outlaw. “He gifted us with an endowment that has helped well over 35 young men and women finance their educations. Not only will his spirit live on, but his charitable contributions are still a blessing in our church and in our community. With every one of our graduates, they know without a doubt that they were the recipients of blessings through the generosity of Jethro Pugh and the Jethro Pugh Scholarship Fund of Indian Woods Missionary Baptist Church.”

Though Pugh left the Baptist church during adulthood, he didn’t stray far and is remember by some former worshipers for his Bible study.

“Jethro attended Trinity Lutheran Church in Dallas where my dad was pastor when we were growing up,” said Laura Meissner Locklear. “He was a gentle giant then, a kind man we all loved and respected.”

Pugh was only 20 years old when he started his professional career as a backup defensive end for the Cowboys.  When he arrived in Dallas in 1965, team General Manager Gil Brandt felt his instincts were right about the Windsor native, who, along with Bob Lilly, anchored the defensive line. One day, someone uttered a now famous line: “You couldn’t score on these guys until doomsday,” and that’s when the Doomsday Defense was born.

Lilly went on to the Pro Football Hall of Fame, but from 1968 to 1972, it was not Lilly, but Pugh, who led the Cowboys in sacks. Over his career, he amassed a total of 92.5 sacks, and currently ranks sixth on the Cowboys’ all-time sacks list though he never made the Pro Bowl.

Pugh retired from the NFL in January of 1979.  After retirement, Pugh became a successful businessman and entrepreneur, with five gift shops at Dallas/Fort Worth Airport.

“He was relentless and punishing on the football field,” said former teammate Mel Renfro.

Another teammate was loquacious linebacker Thomas “Hollywood” Henderson, who appeared in three Super Bowls with Pugh.

“I was in the same locker room with him for four years,” Henderson said. “Jethro was quiet and reserved, observant but not verbal. He was my team mate, tough as nails as a defensive tackle. I’m lucky to have known him from the perspective of the locker room and from the trenches of the game.”

“He was just an individual that went to school for the sake of getting an education, that just happened to be good at playing football,” said Richardson in defining Pugh’s legacy. “He worked hard, he was humble, and he took advantage of his opportunities.”

Pugh’s funeral service will be held Jan. 15 at Oak Cliff Bible Fellowship in Dallas.  A North Carolina memorial will be held at Indian Woods Missionary BaptistChurch at a later date