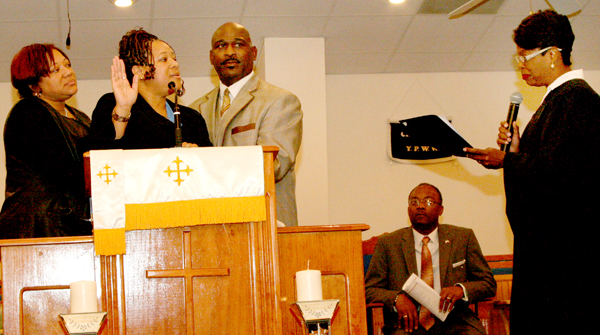 POWELLSVILLE – Saying she wanted to do it for the ones who made it possible, North Carolina District-3 Senator Erica Smith-Ingram held a swearing-in ceremony here on a blustery Saturday afternoon in what she termed the “geographic” center of her district.

The swearing-in took place at Rountree Temple of Praise in Powellsville where its pastor, Dr. J.C. Watford, welcomed those who had made the trip on the rainy weekend.

“Now you know where the great metropolis of Powellsville is located,” the host minister said with a smile to the gathering.

But this day belonged to the Northampton County native who now will pack her bags and head west to the state capital. 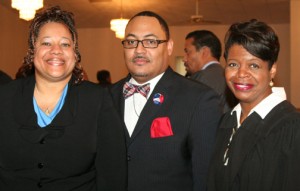 Smith-Ingram, a former engineer, math teacher, and Northampton County School Board member, won the May primary for the 3rd District senate seat by defeating incumbent Clark Jenkins, and ran unopposed in the November election.  She now heads off later this month to the NC General Assembly representing the eight-county region of Bertie, Hertford, Northampton, Chowan, Tyrell, Washington, Martin, and Edgecombe.

While the Raleigh swearing-in takes place Jan. 14 at the Legislative Building prior to start of the General Assembly 2015-16 session, Smith-Ingram took her oath at the church.

That would be appropriate for an ordained minister, which Smith-Ingram is, and taking place on a program dominated by members of the clergy.

In addition to the ceremony, her supporters also hosted an Inaugural Down-East Reception for her at Bertie High School following the Powellsville service.

District Attorney Valerie Asbell of the newly formed Prosecutorial District-Six, and one of the first speakers on program, quoted from a 130-year-old prayer by President George Washington.

“Dispose us all to do justice, to love mercy, and to demean ourselves with charity, humility, and specific temper of mind that were the divine characteristics of the author of the blessed religion,” Asbell read.

“This woman here is a hero and she will go to Raleigh to make this state a better place for all of us,” Asbell remarked, nodding toward Smith-Ingram.

“Going to Raleigh will be far-more challenging now than it has been in the past,” Clayton said. “But sometimes when God gives us challenges, he also gives us opportunities. Senator Ingram, you are to be a sense of light, but we are in a partnership with you.  You wouldn’t have been elected unless you worked at it.”

“The voters were clear in wanting visionary leaders who will confront the issues that we face in the future,” said Butterfield. “And they want you Erica to be that person, and we thank the voters for giving you that privilege. Now use your talent to show bold leadership for this region of eastern North Carolina.”

The primary message was delivered by Rev. Anthony Rawlings of 2nd Baptist Creeksville.

“Let’s join together to improve the quality of life in North Carolina and beyond,” Rawlings intoned. “In this effort we need someone equipped for turbulence and empowered for triumph.  Try to shape North Carolina in a fashion that others can follow; let’s do this.”

The swearing-in was followed by a prayer of consecration by the assembled clergy and led by Smith-Ingram’s pastor, Bishop Wayne Welch of Cool Spring Missionary Baptist in Northampton County.

“I thank you and congratulate you and give you the job when you go to Raleigh to be the voice of all people,” Lewis said.

Finally, Smith-Ingram took to the podium for her expressions to the gathering.

“I wanted to have my swearing-in at home with you,” she began. “Everybody had about a county-away to drive and that’s why we had it in Bertie.

“Raleigh is a lot further away,” she joked. “So we did our best.

“I want to thank all of you who are my family and friends who stood up and volunteered to come together and do this for me, it means so much,” Smith-Ingram said. “I want you to know that my heart will always be in the District; I can’t serve you in Raleigh if I’m not serving you in the local community.”

After commenting on her low-budget campaign, the Senator made her final words of assurance centered on what she hopes to fulfill in Raleigh.

“For the time God will have me on this assignment we will have a better District-3,” she pledged, “one with economic vitality, one with educational growth, and one with equal access for all.  I look forward to serving.”