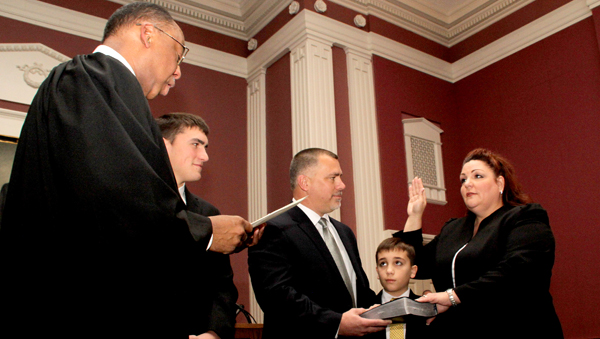 JACKSON – It wasn’t the first time that Valerie Mitchell Asbell raised her right hand and vowed to fairly and impartially serve the State of North Carolina and the people of her district.

What was different this time around is that the citizens she will serve locally have nearly doubled in number.

In front of a near capacity crowd gathered here New Year’s Day inside the historic Northampton County Courthouse, Asbell was sworn in as the District Attorney for Prosecutorial District 6. Effective Jan. 1, that territory has expanded following a merger of Districts 6A (Halifax County) and 6B (Bertie, Hertford and Northampton counties). 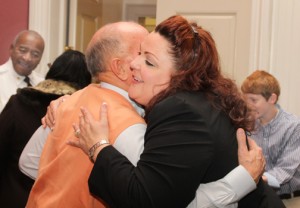 “I want to first of all thank God, he’s the one I look up to, and without the grace of God I wouldn’t be standing here today,” Asbell said after taking the oath from Senior Resident Superior Court Judge Cy A. Grant Sr. “God has graced my life beyond measure.”

“They are my heart,” she said. “The courage you give me every day when I walk out the door and go to work is significant. I wish my mother, my father and my brother could be here today, but I know they are here in spirit; they’re watching and they’re proud. My in-laws are here; they have stepped in as parents since my parents have passed.”

“I know I’m the person elected, but I didn’t get elected alone, I was elected because of my staff….the success of my office over the past 14 years has been due to the dedication and skill of my staff,” she remarked. “They are fearless professionals. They are the DA’s office.

“This is a responsibly I do not take lightly,” Asbell continued. ‘I promise you that I and my staff will do everything in our power to make sure that victims of crime are represented in Bertie, Hertford, Halifax and Northampton counties. I want the people of this district to feel safe when they go out because it’s our job to hold people accountable for their actions while also showing compassion for first-time offenders.”

Asbell will maintain her office in Hertford County as well as one at the Halifax County Courthouse.

“We stand together with a woman of faith who has been purposed by God to serve this great District – Bertie, Halifax, Hertford and Northampton,” said the newly elected Senator who will take her oath of office today (Saturday) in Powellsville at Rountree Temple of Praise. “She is beautiful on the inside and the outside. Thank you to all of those who showed up here today to show her how much you appreciate her service.”

“I campaigned for Valerie during this most recent election cycle,” Ransome noted. “While on the campaign trail I had the chance to confirm three important aspects about Valerie’s life that I already knew for sure since I’ve been knowing her for 22 years. Number one, Valerie is a God fearing woman; number two, she dearly loves her family; number three, Valerie is very committed and serious to her job as District Attorney.”

Phillips said his association with Asbell over the years has been on personal, pastoral, and professional levels.

“Whatever the case, I’ve come to discover that Valerie’s parents must have divine guidance in the selection of her name,” Phillips said. “Valerie means valiant, strong and brave. I think you will concur with me that she is a woman of confidence. I have always had tremendous respect for her. I value her integrity; I value her character.”

Phillips added that all authority comes from God and those in positions of authority have been placed there by God.

“I believe the calling of those who govern us is divine,” he stressed. “This valiant, strong, brave woman has been God selected. I will personally continue to pray for Valerie as the one selected by God to serve humanity in this region so that our lives will be peaceably lived.”

John C.P. Tyler, retired Bertie County Clerk of Court, presented Asbell to the court as the District Attorney-elect for the 6th District.

“She needs no introduction from me; we all know her and what she stands for,” Tyler said. “Her honesty, integrity and devotion to the District Attorney’s office are unsurpassed. She is a strong advocate of law enforcement, victims of crime, and those suffering from domestic abuse.”

Prior to giving the oath of office to Asbell, Judge Grant shared a few words on his professional relationship with the District Attorney and her staff.

“I’ve held court in 48 different counties in this state where I’ve witnessed the workings of numerous prosecutorial staffs,” said Judge Grant. “Her staff is probably one of the best, perhaps the best, prosecutorial staffs that I’ve encountered during my career. They are always well prepared; they never waste court time. And Valerie Asbell is an outstanding trial attorney, but the most important thing I can say about her is that she cares about victims of crime.”