WINDSOR – A Windsor man spent his Christmas holiday behind bars following his arrest for an armed robbery committed last weekend. 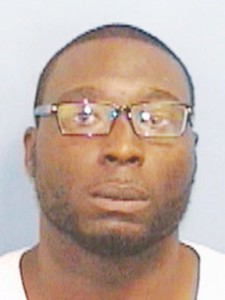 Kevin Ruffin, 34, of 110 Hamlin Lane, Windsor is in the Bertie-Martin Regional Jail under a $125,000 secured bond after being charged with one count of first degree burglary, one count of robbery with a dangerous weapon, one count of assault by pointing a gun, and one count of possession of a firearm by a felon.

Bertie County Sheriff John Holley says sometime in the early morning hours of Dec. 21 a resident at 116 Robin Lane in Windsor heard a loud banging outside their home, after which the door to their home was kicked in by a large black male with a stocky build wearing a white T-shirt over their face, with the eyes exposed, and having a diamond stud nose ring.

The victim claims the perpetrator entered the house carrying what they describe as a big black shotgun with a long banana clip. The man pointed the weapon at the victim and demanded money. When the victim refused to cooperate, the perpetrator began ransacking the home.  $450 in cash was taken along with the victim’s cell phone.  The perpetrator then ran from the house on foot.

Meanwhile, the victim ran to a neighbor’s house where she reported what had happened.  The neighbor then called the victim’s boyfriend, who arrived and called 9-1-1.

Sheriff Holley said his office received the call around 1:39 a.m. and officers were on the scene at 2:03 a.m. interviewing the witness, who revealed they knew the perpetrator.

Ruffin was arrested at 5:39 p.m. on Tuesday, Dec. 22, when he turned himself in at the Sheriff’s office.  Detective Harris Williams of the Bertie County Sheriff’s Office assisted in the investigation and subsequent arrest.

Ruffin’s trial date has been set for Jan. 7.