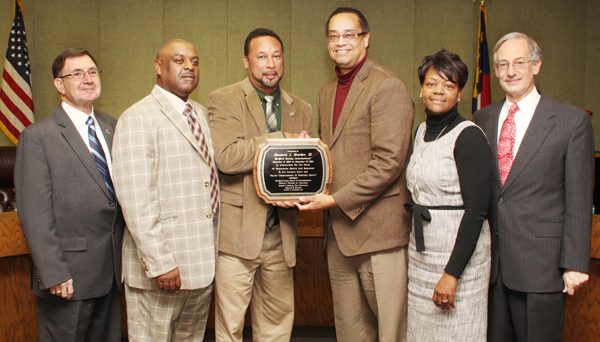 WINTON – It was enough to make a grown man cry….or at least prompt a teary-eyed response.

This past Monday marked the end of the local political career by Howard Hunter III. The 10-year member of the Hertford County Board of Commissioners will officially resign his seat on Dec. 31 and embark on a new political journey as a member of the North Carolina House of Representatives. He earned that 5th District seat (Bertie, Hertford, Gates and Pasquotank counties) by defeating Sidney Pierce III in this past November’s General Election.

Hunter will be sworn in on Jan. 14 in Raleigh. There he will follow in the footsteps of his late father (Howard Hunter Jr.). Hunter Jr. served nine, two-year terms in the NC House of Representatives. He was elected to a 10th term, but died in early January of 2007, two weeks shy of being sworn in. Hunter Jr. also served 10 years as a Hertford County Commissioner.

“I love each and every one of you,” said Hunter, his eyes filling with tears and his voice chocked full of emotion. “To the employees of Hertford County, I thank you so much for all your hard work over the years. And I thank the citizens of this county for putting their trust in me by electing me to be your voice on this board.”

Hunter then left his seat and walked a few steps over to where Commissioner Johnnie Ray Farmer was seated. Farmer rose to his feet, accepting a hug of friendship from his long-time board colleague.

“I chose to do that because I feel Johnnie has been by my side since I joined this board, and I thank him for that,” Hunter remarked.

“This is a day that we knew was coming,” stated Farmer. “It’s one of those days that you look forward to because we’re happy to see our friend and colleague advance his career, but it’s sad at the same time because we’re losing him as a member of this board.

“Howard and I have become great friends over the years,” Farmer added. “We’ve shared a lot of miles (on the road, traveling to events), a lot of phone calls, a lot of meals, and a lot of family time. Our friendship has taken us a lot of places.”

Farmer recalled one instance when the State House of Representatives assembled to recognize Hunter’s late father. The Hunter family was gathered that day in a special place in the balcony of the House Chambers.

“Howard invited me and my wife to attend that ceremony,” Farmer remarked. “We just missed getting inside the door as the session was about to begin and were prevented from entering by the Sergeant At Arms. Howard saw what was happening and he came down to tell the Sergeant At Arms that we were part of the Hunter family and to let us in. That’s the way it’s been between us….we’re family. I love him like a brother.”

Farmer continued, “He’s just like his dad, he knows everybody and is friends with everybody. In the (North Carolina County) Commissioners Association, everybody loves him; they begged him not to run (for State House). They wanted to keep him around the Association. But I know Howard will do well in Raleigh. He and his family are well-known in state politics and he’s well thought of. He’s a special friend and I’ll miss him here, but I look forward to the things he can accomplish in Raleigh.”

Other Commissioners also used the opportunity to wish their colleague well on his new journey.

“Congratulations to my fellow commissioner, soon to be (State House) Representative Howard Hunter. I wish him nothing but the best,” said Commissioner Ronald Gatling.

“I’ve known Howard for a long time. We grew up in Murfreesboro; in Boy Scouts together and played together,” stated Commission Chairman Bill Mitchell. “I always had a lot of respect for his family. He came from good stock.

“It’s hard sometimes being a commissioner,” Mitchell continued. “When I became a commissioner, I noted how hard Howard always worked. I know he will take that same effort and passion in being our State House representative. I wish him the best.”

Other members of the HertfordCounty local government leadership team also offered parting words for their friend and colleague.

“Howard, I’ve sat here and worked with your grandfather, your father, and now you….your family has quite a legacy of leadership in Hertford County. I feel certain that legacy and the work you’ve done here over the past 10 years has well prepared you for this next stage of your career in public service,” noted Murfreesboro attorney Charles “Chuck” Revelle, legal council to Hertford County local government.

Hertford County Manager Loria Williams had to briefly collect her emotions before offering her thoughts on Hunter’s career.

“I have a wonderful board in which to work for, but the initial board (to include Hunter) that hired me here did so at a time when I certainly needed someone to have some confidence in my ability,” Williams said. “This board has done nothing but support what I do and how I do it over the last 10 years. You can’t really be effective at what you do without support.

“I want to thank you, Mr. Hunter, for being one of those board members that took a chance on me, and for your continued support. I give that nod to that initial board and to those who are seated here right now. Yes, we have fussed; we have fought, but we all have a passion for what we do and how we do it,” she added.

Williams said Hunter can now take that passion developed at the local level to Raleigh.

“Don’t go up there and became a Raleigh man; don’t forget where you came from,” she urged. “This is so bittersweet; we’re blessed to have you here, but we’re looking forward to what you can do for us as our state representative. You will be able to keep local government issues in front of our state legislators.”

“Hertford County is blessed to have you here; we have not had a (property) tax increase in 10 years and I hope you can continue that trend,” Hunter said, directing his remarks towards Williams.

Hunter had a letter prepared to read to the board, but chose not to at this time.

“I don’t know if I can get through the first paragraph without first losing my emotions,” he said. “I’ll give it to you (Williams) and you can share it with the other board members.”