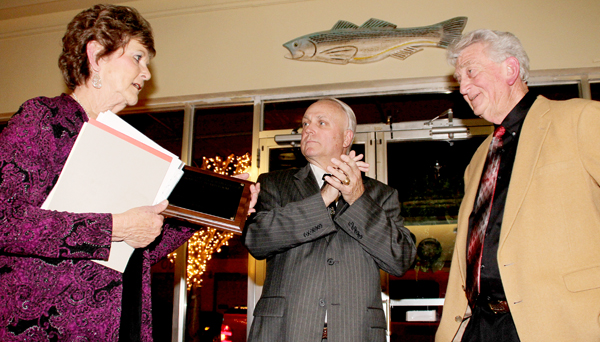 Judy and Dick Collier accept a plaque from Jackson Mayor Jim Gossip (center) that names the Community Board Room at the Northampton County Visitor’s Center in their honor. Staff Photo by Cal Bryant

JACKSON – It’s always nice to have a place to hang your hat.

Since organizing in 1995, the Northampton County Chamber of Commerce has bounced around at several locations within Jackson. Its roots began in cramped quarters in the rear of the Day Reporting Center located on Thomas Bragg Drive. Five years later the Chamber office moved to an equally small building on Jefferson Street (US 158) adjacent to the Jackson Town Hall.

Now the Chamber finally has some breathing room, where visitors and guests will not have to “bump elbows” with office staff.

“Our Chamber has come a long way,” said Sidney Joyner, President of the Northampton Chamber’s Board of Directors. “We’re seeing an increase in new members. Our growth is also evident in the number of new projects we’ve undertaken. We thank our members for their support, and pledge to move forward with your continued support. Please stop by and see us.”

The steady progress of the Northampton Chamber is not lost on Jackson Mayor Jim Gossip, who also serves as treasurer of the Chamber and Vice Chairman of the TDA Board.

“Where we are today has been an evolutionary process,” stated Gossip. “When we were in the back of the Day Reporting Center, we were in a very small area; literally you could barely turn around in that office. But it served us well; it was a good starting point for us.”

Gossip noted that particular building was the former home of the Jackson Post Office.

“Several years ago we approached the county Board of Commissioners with respect to putting all of the economic development engines – the Economic Development Commission, the Chamber of Commerce and the TDA – in Northampton County under one roof,” Gossip recalled. “The rationale for that proposal was to develop a synergy between those agencies and for economies of scale and efficiency. Basically it would become a one-stop shop with all of us under one roof.”

Gossip said that proposal gained favor with the Commissioners as well as with then County Manager Wayne Jenkins.

“We went forth with seeking approval to apply for a $160,000 grant from USDA to acquire and renovate a structure to house these organizations,” Gossip stated. “Times were tight economically then and the grant did not come to fruition and the county was not in a position to handle that type of funding.”

However, that bump in the road did not derail the dreams of those involved in this project. And to their rescue came a Jackson native – Dr. Mary Blair Bowers, a retired research chemist now residing in Chapel Hill.

“She called me in the fall of 2013, praising us for the phenomenal job we were doing with our revitalization initiative and wanting to donate a building to our cause,” Gossip said. “We eagerly accepted ownership of this building.”

But work remained to be done in an effort to pump new life into an aging building….one that believe it or not, was once the home of the Jackson Post Office.

Calling it a “collaborative effort”, Gossip read from a list of benefactors that helped restore the building, paving the way for the grand opening of the Northampton County Visitor’s Center. That list of donors, providing either funding or in-kind services, includes:

Gossip shared the unique stories of how the latter three became involved in the project.

Long, a Northampton County native, is now a New York City resident famous for his costume designs for Broadway and the movies. He is a 13-time nominee and six-time winner of the prestigious Tony Awards.

“We called him about the new Visitor’s Center; we needed something unique here that other visitor’s centers would not have,” Gossip said. “We wanted one of his costumes. He graciously agreed to let us have one of the costumes he designed for The Lost Colony.”

Long chose the costume of Sir Ralph Lane, an English explorer and Governor of the first English settlement in America in 1585.

“We had to order an appropriate mannequin; you simply do not hang a William Ivey Long costume on a department store mannequin,” Gossip remarked. “Rootstein Mannequins of Manhattan (New York City) was where we were advised to go. We had a $1,500 grant from the Northampton Arts Council. The mannequin was $2,200. Rootstein Mannequins was so excited about the project that they donated the difference.

“My wife and I took the mannequin to The Lost Colony and met with Lance Culpepper, Associate Producer of the outdoor drama. He helped place the costume on the mannequin, to include putting on the hair, beard, and eyelashes…so, thusly, The Lost Colony was also a benefactor to our project here in Jackson,” Gossip added.

The end result was that no public funding was involved in the transformation of the old building.

“There was no taxpayer money used in the renovation,” Gossip noted. “It was all made possible through money that was donated or by way of in-kind services. We’re very fortunate to have this facility.”

Fortune also came in the form of Dick and Judy Collier. They basically started the Chamber from their home in Lasker, where the husband serves as the town’s Mayor. Dick Collier has served as the TDA Director since its founding in 2010. Judy Collier is the Chamber’s Executive Director, serving in that role since 2006.

Due to their combined efforts, the Chamber Board of Directors voted unanimously to name the Community Board Room, located in the rear of the Visitor’s Center, in their honor.

In reading the plaque, Gossip said the Colliers were chosen by the Chamber Board to be so honored for “their unparallel support for the Northampton County Chamber of Commerce for more than 20 years.”

“I can tell you on a personal note that I’ve seen through those 20 years the dedication and diligence that Dick and Judy have shown,” Gossip said.

“(This building) is a goal we’ve had for a long, long time,” said Judy Collier, clutching the plaque. “If you could see where we came from you would really appreciate and understand. This is a joy for Dick and I. We love Northampton County.”

“We have two good Boards working with us, the Chamber and the TDA,” noted Dick Collier. “They have helped us get where we are today. I still look around and can’t believe where we are today. I’m used to sitting in a cramped room with boxes cluttered all around. Thanks so much to everyone that has made this dream of ours come true.”

For more information on The Visitor’s Center or the three entities housed in the building, call 252-534-1383.