Servant of the people 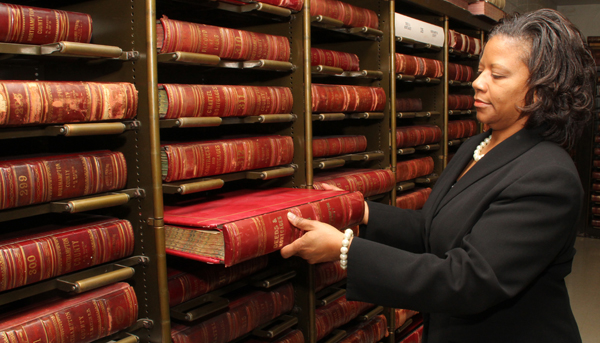 Robin Phillips of Rich Square is the new Register of Deeds in Northampton County, the choice of the county’s Democratic Party and Board of Commissioners to fill the unexpired term of Pauline Deloatch. Staff Photos by Cal Bryant

JACKSON – She’s a “down home girl” whose roots run deep within the fertile soil of Northampton County.

Her work career is top-heavy in public service….from working behind the counter at the famous “Patio” in her hometown of Rich Square; to taking care of those less fortunate through two positions with the Department of Social Services; to handling the Public Relations of one of the local area’s most trusted businesses.

So, when the opportunity arose to change career hats, but yet continue as a public servant, Robin Phillips seized the moment.

Last week, Phillips replaced Pauline Deloatch, who for 26 years served as the Northampton County Register of Deeds, choosing to retire with two years left on her current term in office.

“I don’t think I can replace Miss Pauline, with all the experience she has….that’s some mighty big shoes to fill,” Phillips humbly stated during an interview in her new surroundings.

Phillips is the daughter of the late Major Lee and Janie Phillips, who made their home just on the northern outskirts of Rich Square. She is a member of the Class of 1984 at Northampton County High School East and then went on to earn a pair of two-year degrees (one each in Information Systems and Business) from Roanoke-Chowan Community College.

She parlayed the latter degree from RCCC into a full-fledged Bachelor of Arts in Business degree from Shaw University and later earned a Masters in Marketing from the University of Phoenix.

All the while, Phillips worked at part-time jobs….to include her first three: The Patio, The Pantry, and at the Perdue processing facility in Lewiston.

“I’ve been here all my life, and I’ve worked all my life,” she said. “I credit my parents for my work ethic. There was no sitting around and doing nothing at my house. You got out and worked.”

Her life in the public sector included positions with DSS in Northampton (Child Support Office secretary) and Hertford (Food Stamps) counties. That lifestyle continued with a job at Bertie-Hertford Child Support.

In 2002, Phillips landed a job with Roanoke Electric Cooperative as a secretary in the Engineering and Operations department, thus beginning a career that saw her quickly climb the ladder of success. She was promoted to Office Manager of Roanoke Energy Resources and concluded her career there in November of this year as Public Relations Coordinator and Communications Specialist.

“I enjoyed my work with Roanoke Electric; that’s a business that really lives up to its mission of enhancing the lives of the people who live within the many communities they serve,” Phillips said.

Phillips said she left Roanoke Electric, “to take some time off, to regroup, and consider going back to school.”

“I had no idea that the Register of Deed’s job was about to open up,” she said. “I was approached about it and told with my career of dealing with the public that I would be good at this job.”

Twice she said no.

“The third time I was contacted, I decided to look into this job,” Phillips said.

Because the job opening is political in nature (the Register of Deeds in any county statewide is an elected position), Phillips had to go through certain channels to make herself known as a possible candidate for replacing the retiring Deloatch.

According to North Carolina General Statute 161-5, when a vacancy occurs from any cause in the office of register of deeds, the board of county commissioners shall fill such vacancy by the appointment of a successor for the unexpired term, who shall qualify and give bond as required by law.  If the register of deeds was elected as the nominee of a political party, the board of county commissioners shall consult the county executive committee of that political party before filling the vacancy and shall appoint the person recommended by that committee, if the party makes a recommendation within 30 days of the occurrence of the vacancy.

In this particular case, Phillips was interviewed by the executive committee of the Northampton County Democratic Party.

“They asked a lot of questions and got to know me better,” she said.

The committee must have liked what they saw and heard from Phillips as they recommended her to the county’s Board of Commissioners to fill the two years remaining on Deloatch’s term of office. In a 5-0 vote, the Commissioners agreed with the committee’s recommendation.

“This is a very important job as the staff in this office are the guardians of Northampton County history,” Phillips stressed. “There are very, very important documents housed here, some dating back to the 1700’s.”

“I did some research and realized the importance of this office,” she said. “I felt I had two key things in my favor…I love my county because I grew up here, and I’m a very organized person.

“I’m also accustomed to dealing with the public due to my past jobs,” she added. “I feel that’s one of my strong suits.”

It’s still early in her new career, but Phillips sees a bigger picture down the road for the Northampton County Register of Deeds office.

“There’s been some discussion before I got here to make an effort to have digital access to these files,” she said. “That effort will take a lot of work and we’ll need to be very vigilant to ensuring certain portions of those records, to include Social Security numbers, are not compromised.”

Phillips said her confidence to perform the new tasks at hand is built on the foundation of the three other women that share the same office – Deputy Clerks Velma Long, Laverne Harris, and Clarissa Kisic.

“Normally when you go into a new position, especially one of this magnitude, where you are very green experience wise, you often encounter co-workers that are not very receptive,” Phillips noted. “That didn’t happen here; I was welcomed with open arms. They helped me; answered the questions I had and I’m extremely thankful for that.”

As to what the future holds after the expiration of the two-year term, Phillips may also have to become a politician seeking election to an office.

“I’ve thought about that; I’ll just wait to see what happens over the next couple of years, but, for now, these doors are open for myself and this staff to serve the public,” she concluded.