ROANOKE RAPIDS – A new era began in the Roanoke Rapids Police Department on Monday as Chuck Hasty was sworn in as the new chief and Andy Jackson took the oath as deputy chief.

Hasty, a Roanoke Rapids native, served as the Captain of the Northampton County Sheriff’s Office prior to accepting the city’s offer to become its ranking police officer. 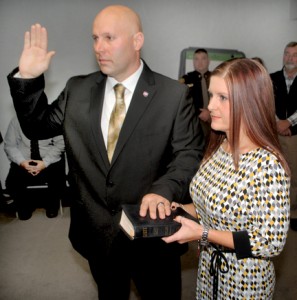 With his wife, Tonya, holding the Bible, Chuck Hasty takes the oath of office as the new Chief of Police in Roanoke Rapids. Photo by Lance Martin / rrspin.com

In his five years as mayor, Emery Doughtie said Jackson, who served as interim Chief, brought stability, guidance and dependability to the police department.

“We want to see new ideas,” Doughtie said. “It will be challenging but there are a lot of opportunities.”

“It’s an exciting time for the Roanoke Rapids Police Department as the city administration continues to grow and strive to remain adaptable, motivated and responsive to our citizens ,” City Manager Joseph Scherer said before the ceremony. “We pride ourselves on being professional, relevant and customer-focused.”

The city manager said administration is confronting a time of many changes.

“We’re meeting those changes during a time of larger nationwide and global change,” he said. “The world of law enforcement is an exciting area in which to work and we will continue working to ensure that our police department remains on the cutting edge.”

He said the police department continually looks for ways to transform its operations in line with its goals of providing planned, efficient and acceptable services for the citizens in a cost-effective manner.

“Our employees and local partners have continued to meet the challenges of our mission and to excel despite setbacks. We are proud of where we are today and excited about where we are headed,” he stated.

In an event that was attended by law enforcement across the area, Jackson said he was appreciative of all those who came to show their support.

“I made a decision 25 years ago to serve the public,” he said.

Hasty thanked the city council and the city staff.

“I look forward to working with Deputy Chief Jackson to do the best we can to make this a better place. We are all working together. We can make this work,” Hasty remarked.

Scherer said following the ceremony Hasty became the frontrunner during his interviews.

“We felt he had the best skill sets and abilities,” he said.

Northampton County Sheriff Jack Smith, who hired Hasty as his investigations captain, said, “I think he will do a very good job, The citizens in Northampton were very pleased and will be glad they have a familiar face in Roanoke Rapids.”

(Lance Martin is Editor and Publisher of www.rrspin.com. This article and photo are published with his permission.)