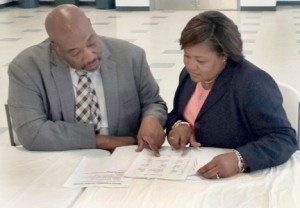 Chief District Court Judges W. Rob Lewis II (6B) and Brenda G. Branch (6A) work through the details in advance of the two Judicial Districts merging effective Jan. 1 of next year. Branch was appointed Dec. 10 as the Chief Judge of the new District. File Photo

Starting on Jan. 1, 2015, judicial districts 6A and 6B (currently Bertie, Hertford and Northampton counties) will merge into Judicial District-6.  This change was mandated by the North Carolina General Assembly in 2013 with the passage of Senate Bill 402.

“Judge Branch has served ably and conscientiously as Chief District Court Judge of District 6A, and I am confident that under her leadership the district courts of all the counties in the new district will operate with efficiency and fairness to ensure the proper administration of justice in our courts,” Chief Justice Martin said. “I appreciate her outstanding work and dedicated service to North Carolina’s court system.”

Since July of this year, Branch teamed with W. Rob Lewis II, the Chief District Court Judge for 6B, to prepare for the pending merger of the two districts.

Lewis along with District 6B Judge Tom Jones, Jr. were the victims of circumstance with the merger. Those two seats on the judicial bench, which expire Dec. 31 of this year, were eliminated. Both had planned to seek reelection, but will now have to wait until the 2016 election cycle if they opt to seek one of the four seats on the bench.

Other than Branch, the remaining judges for the merged District include Vershenia Balance Moody of Northampton County, and W. Turner Stephenson III and Teresa R. Freeman, both of Halifax County.

“I want to the citizens of District 6B to understand that the judges of District 6A had nothing to do with the elimination of the seats on the bench now held by Judge Lewis and Judge Jones,” Branch stressed in an earlier interview. “We all fought against this merger, but we lost that fight due to the political process in Raleigh.

“There was no way the state could legally go against the wishes of the voters and oust Judge Lewis and Judge Jones while they were serving an active term of office (four years),” Branch added. “The only legal recourse was to wait until their current terms expire (Dec. 31, 2014) and officially eliminate those seats on the bench.”

Judge Branch began in September to conduct a series of meetings with several different agencies within the new district that are served by the court system in order to set the court schedule that begins in Jan. 2015.  Part of those meetings includes speaking before the Boards of Commissioners of the four counties in order to outline the plan.

“Right now, some of the citizens might not get the services they’re used to,” Branch said when she met in September with the Hertford County Board of Commissioners. “They may not have the direct contact with the judges that they’re having now; some of those things will change.”

Branch indicated some of the scheduling may have come sooner, but they wanted law enforcement in the four counties to have at least four weeks of preparation for the changes.

“In HalifaxCounty we have a DWI court, if we’re not going to have it, they need to know things like that,” Branch said. “We’re going to try to get it out to give people time to plan their workload for the year as well.”

She commended Judge Lewis, a 20-year veteran on the bench, for his assistance during the transition.

“I commend (him) because he’s been working with me giving me the benefit of his experience,” Branch complimented. “He’s been explaining and he’s been going places; whereas some people would say, ‘They did this to me, I’m not going to be bothered’, he has not done that, he has been very helpful and cordial to me and I appreciate it.”

Branch related other aspects of the judicial process with regard to the district.  Among them were the assignment of additional judges, as needed; and the desire to retain the district’s two administrative assistants: one in Halifax and the other in Bertie.

“We want to keep both so that we won’t lose any more jobs; so it’s not just about courts it’s about jobs, too,” she reiterated.