The department’s Board voted unanimously to appoint Brenda Powell Brown as the new director effective Nov. 18.  She has been serving as the department’s interim director since February of this year. 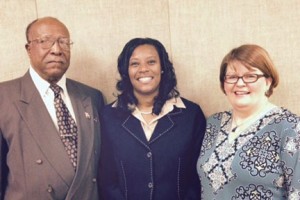 A native of Hertford County, Brown was born and raised in Ahoskie. Her first experience with the Hertford County Department of Social Services was as a client.  Eventually she gained employment as a receptionist, spending the last 15 years working her way to a supervisory position and on to the department director.  Prior to her appointment as interim director, she served for nine years as the Child Protective Services supervisor.

“I can remember how it felt to sit on the other side of the desk in this very same Social Services department when I was a client in need of services,” Brown said. “I was a very young, teenage mother with a limited income from a Work First check; I received Food Stamps and was on Medicaid. I utilized the resources and benefits at Social Services until I became self-sufficient.

“I believe you can be anything – anything in life that you want to be,” Brown continued. “All you have to do is believe in yourself, put in the work, and don’t be afraid to ask for help, and you can achieve. If anyone would have told me when I was a client and when I first started working with the agency 15 years ago that I would become the director of Social Services, I would have not believed it.”

Brown states that she has learned a lot in her nine months as interim director and knows there is more to learn. In her role as director, she will be responsible for supervising, managing, and overseeing the department’s many programs and its fifty-five employees.  She is truly compassionate about helping people and states she truly believes and supports the agency’s mission:

The Hertford County Department of Social Services is an agency committed to the belief that all the citizens of Hertford County should be adequately fed, clothed, sheltered and provided an opportunity to become as self-sufficient as possible. The agency is responsible for operating the assigned government programs according to the rules and regulations promulgated by the governing bodies responsible for the implementation of each program. It is the responsibility of the agency to assure that all individuals who are eligible for various programs are aware of these resources and benefits. and have an opportunity to apply for any assistance which may be needed and for which they may be eligible.”

“I hope the citizens of Hertford County will neither feel ashamed or embarrassed to walk through our agency’s doors to find out what services they may be eligible to receive. Our agency welcomes you,” Brown stressed.

Brown is a 1999 graduate of Elizabeth City State University where she earned a Bachelor of Science degree in Criminal Justice. She received her Masters of Human Services degree with a specialization in Social Services in 2007 from Capella University.  She is currently pursuing a Masters of Social Work degree from Boston University with anticipated completion in December 2014.

Thankful to God for this new opportunity, Brown also expresses her thanks to family and friends for all their love and support. She was raised by her now deceased maternal grandmother, Clara Vinson Powell, to whom she gives credit for her upbringing.

She is married to Antony Brown and has two children, a daughter, Dajah Chamblee, and a son, Christian Brown.