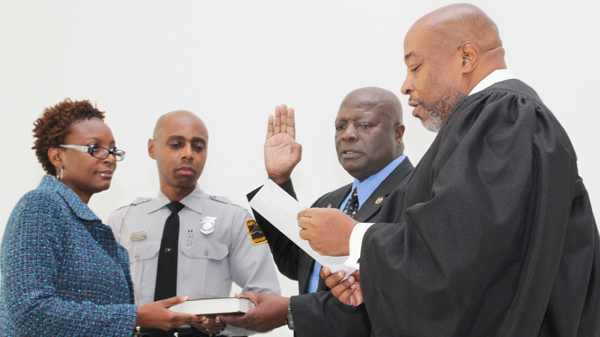 JACKSON – There’s a new sheriff in town. However, it’s a familiar face.

Smith, who over 30 years ago was a North Carolina State Highway Patrol Trooper assigned to Northampton County, has served as the county’s interim Sheriff since August of last year. He defeated a Democratic challenger in this past May’s Primary Election and then ran unopposed in November’s General Election.

“The will of the Northampton County citizens was spoken in the (November) election,” said Judge Lewis.

“In August of last year, the Northampton County Board of Commissioners made what I feel was a very, very great decision in appointing Mr. Jack Smith as our interim Sheriff,” said Commissioner Robert Carter. “He brings many, many years of law enforcement experience to this county. We were so proud that when he ran for office that you elected him to serve in this capacity. Seeing this crowd here today tells me that you support Sheriff Smith and his deputies.”

Smith, in accepting the oath, first gave thanks to his Lord and Savior, Jesus Christ.

“As we grow we realize that everything in life is not possible without the blessings of the almighty,” Smith remarked. “He always needs to be involved in our lives.”

He thanked the Commissioners for giving him the chance to serve as interim Sheriff.

“It was my pleasure to serve as your interim for the past 15 months and now I look forward to serving you and all our citizens as your elected Sheriff,” Smith stressed.

Smith credited the success he has enjoyed to date to his staff.

“They are excellent law enforcement officers and staff members; this county is truly blessed to have them,” he noted.

Smith vowed to give 100 percent to the job.

“That’s each and every day,” he said. “I come in early and I stay late. I don’t mind working weekends. I do this certainly not for the pay, but rather for the citizens of this county.”

He thanked Hertford County Sheriff Juan Vaughan and Halifax County Sheriff Wes Tripp as well as the Police Chiefs of all Northampton County municipalities for their willingness to work with his office.

In attendance at Monday’s ceremony was recently retired Nash County Sheriff Dickie Jenkins, a Northampton County native. Smith and Jenkins have been close friends for over 40 years, including Smith’s stint as serving as Nash County Chief Deputy.

“I appreciate everything Sheriff Jenkins taught me; he’s like a brother to me,” Smith said.

Smith’s 88-year-old father, a native of Martin County, was seated on the front row, proudly watching his son take the oath of office.

“He taught me very early in life that a man may not have much money, but he does have his word,” the Sheriff said. “If you tell someone you’re going to do something, then take every measure that’s humanly possible to stick to your word.

“We’re all human and we make mistakes,” Smith added. “If I make a mistake, please forgive me and understand that it’s not intentional. Please pray for me and the decisions I make will be what’s just and what the good Lord would approve himself.”

Fannie Greene, the newly elected Chairwoman of the Northampton Commissioners, recalled her association with Smith back when they wore different hats in the county.

“I managed Probation and Parole back when Sheriff Smith was a Highway Patrol Trooper in our county,” Greene said. “We were able to build a great working relationship and this is a proud day for me to introduce him as our new Sheriff.

“Over the years I’ve found Jack Smith to be a very accountable person. If he tells you he’s going to do something, he does it and that’s what we need here in Northampton County,” Greene added. “He’s honest and upfront with people. That’s the kind of person I want helping to lead Northampton County.”

“This county did itself proud when we offered and Jack Smith accepted this interim position, and now he’s voted in by our citizens,” stated Commissioner Joe Barrett. “I’m very attached to the law enforcement in our county because I’ve been an emergency first responder here for 43 years. The Sheriff’s Office comes out to assist us and as is so often the case, we are there under not so good circumstances. I want to thank Sheriff Smith and all his deputies for all they do.”

Smith, a native of Martin County, is a former member of the United States Marines who served a tour of duty in Vietnam.

Smith is the father of two children – a son, William, and a daughter, Jacqueline Barnes, and the grandfather of William and Leah.