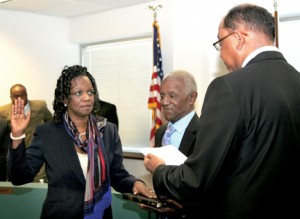 The morning agenda opened with retired Clerk of Superior Court John Tyler reminding the new Commissioners, as well as the general public gathered for the swearing-ins, of the duties about to be undertaken.  Tyler quoted from North Carolina General Statute 153A on the exercising of each county’s corporate power. 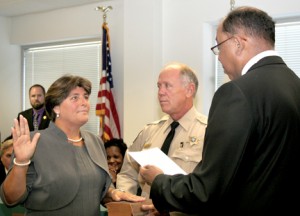 “That’s a great burden and a great duty placed upon the Commissioners,” Tyler reminded all the members of the board.

Following the former Clerk’s reading, Judge Grant administered the first two oaths of office: first, with the swearing-in of the office of Bertie County Sheriff to John Holley for his second term, followed by current Clerk of Superior Court, Vasti James, who won her first full term of office with the November election.

The invocation was then given by Pastor Roy O. Denton of Askewville Bethel Assembly of God Church.

After that came the swearing-in, en masse, of deputies of the Bertie County Sheriff’s Office.

Each of the newly elected Commissioners then took their oath, carried out alphabetically beginning first with the historic swearing-in, for the first time in the county’s history, of two women Commissioners in Bazemore and Lee. 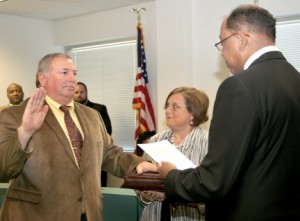 Hope White held the Bible for her husband, Stewart, for the final swearing in of the morning.

Each Commissioner then made a few remarks of gratitude: White giving honor to God; Bazemore thanking her relatives, some of whom made the journey from out-of-state to the ceremony; while Lee pledged to work in the best interest of the county,

Since the new Board had not yet reorganized or selected officers, County Manager Scott Sauer called the regular meeting to order after the brief respite.

Invocation was given by Pastor Gary Cordon of Victory Temple Church of God in Christ in Windsor before the start of the agenda.

The new board’s first order of business was the election of a new chairman and Bazemore placed Commissioner Ronald D. “Ron” Wesson’s name in nomination, the lone name submitted for consideration.  Wesson was then elected by unanimous choice from his fellow Commissioners.

As Wesson accepted the gavel, he then asked for the selection of a vice-chairman and placed Lee’s name in nomination.  With no other nominations, Lee was unanimously selected to the post.

Lee becomes the second first-term Commissioner to serve as vice-chairman, after Patricia Ferguson’s election in 1994.

With the election complete, there was the moving of seats at the rostrum.  As the seating was temporarily shuffled about, Sauer then injected a bit of brevity into the proceedings.

“If it’s alright with all of you,” the County Manager began, “we’ll switch nameplates after this meeting.”