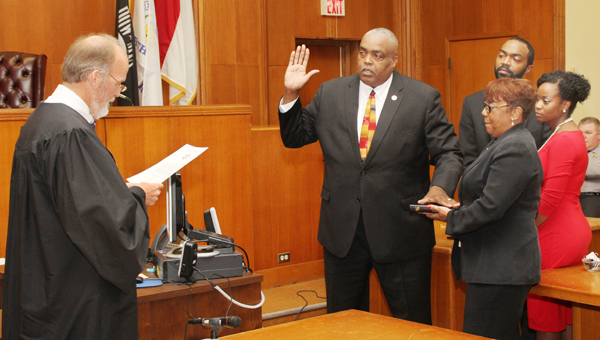 For the fifth time in his career, Juan Vaughan (center) accepts the oath as Sheriff of Hertford County as his wife, Gail, holds the Bible while his son, Andre, and his girlfriend, Austin Hill, witness the occasion. The oath was administered Monday morning by Judge Thomas Jones Jr. (left). Staff Photo by Cal Bryant

WINTON – Seventeen up and seventeen down with four to go.

On Monday, Hertford County Sheriff Juan Vaughan Sr. raised his right hand and took an oath to protect and serve those that live, as well as those who visit, within the confines of his jurisdiction.

For Vaughan, entering his fifth term as the county’s top law enforcement officer, he should know that oath by heart. And his heart was humbled as he looked out over a large gathering assembled in the Superior Courtroom to witness the occasion.

“Thank all of you for coming out; I really appreciate the community support because I feel without it we don’t have a safe county,” Vaughan said.

He also thanked his staff, many of whom have stood by Vaughan’s side for nearly as long as he has been Sheriff.

“We have a very cohesive staff and without that cohesiveness we’d be nothing,” Vaughan remarked. “From my regular deputies, special deputies, school resource officers, dispatchers, bailiffs, and administrative staff, thank-you for the job you do well, day in and day out.”

Vaughan recalled the first time he took the oath following a vote of the people….Jan. 1, 1998 (he had served one year prior to fill an unexpired term).

“I told you from day one that it’s my top priority to make Hertford County a safer place to work, live and play and with the assistance of my deputies over the years, I feel we’ve done that,” Vaughan stressed.

As he enters another term and a new year, Vaughan pointed out there are challenges ahead, particularly with providing security at the new Hertford County Judicial Center, which is nearing completion.

“It will take more staff there, but I can promise the same level of security,” he stated.

Vaughan took the oath of office from District 6B Judge Thomas Jones Jr.

“It’s my honor to swear in my sheriff, Juan Vaughan,” Jones said. “I’ve known him for many, many years…remembering him from when he was in high school, then a probation officer, then a deputy and now the high sheriff of Hertford County, and he has run unopposed all these years.

“I’ve proudly called him my sheriff for the past 17 years. He’s a very good friend of mine, but to top that he’s an excellent sheriff. Just look at the way his deputies handle themselves and the way the jail is run and you’ll see a reflection of Juan Vaughan. We are very, very fortunate in this county to have a sheriff like Juan Vaughan. It’s my honor to administer his oath of office for a fifth term,” Jones added.

The Judge had high praise for Vaughan’s capable staff for making him feel safe and secure while conducting court in Hertford County.

“If you don’t believe how good his court bailiffs are, come and sit in court and act up….they have very loud voices and I don’t have to do a thing (to restore order), they do it,” Jones noted. “I commend them for the job they do.”

Jones also swore in all of Vaughan’s deputies.

A reception in honor of Vaughan’s accepting his newest term in office was held in the Hertford County Cooperative Extension office following the swearing-in ceremony.