‘History’ in the making 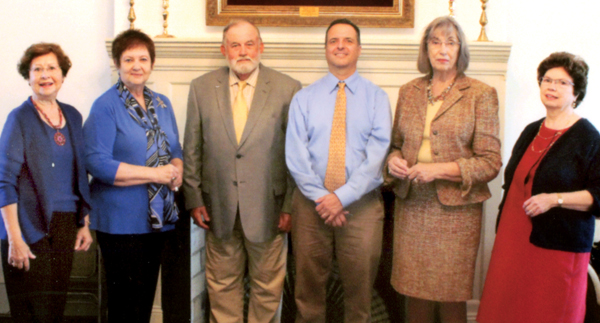 Shown here are members of the Murfreesboro Historical Commission and the editor of a book that promises to depict historical property in the town and Hertford County. From left are Lynette Bunch, Lynn Johnson, John B. Parker, Daniel Pezzoni (book editor) Majorie Way, and Erin Faile. Contributed Photo

MURFREESBORO – A lot of research….40 years to be precise….will be the subject of a book tracing the rich history of Hertford County.

“West Of The Chowan: The Architectural History Of Hertford County, North Carolina” is an undertaking of the Murfreesboro Historical Commission, Inc. This Commission was formed in the late 1960’s but has just recently been designated a 501(c) 3 charitable corporation by the IRS in order to obtain favored tax status to encourage private and corporate contributions.

According to Lynn Johnson, a member of the Murfreesboro Historical Commission, the Federal Government passed the Historic Preservation Act in 1966, one mandating that each state conduct an inventory of its historic resources and list significant buildings and sites on a National Register of historic places.

“These surveys, done by every state in all counties, has taken more than 40 years and the survey for Hertford County was completed in 2011, after several attempts by different people,” Johnson said.

At a meeting of the Commission in the Fall of 2011, a suggestion was made by a representative of the North Carolina Historic Sites Division of the Department of Archives and History that the Murfreesboro group tackle the project of publishing the Hertford County Survey in book form.

“The suggestion was made into a motion and the entire body approved the project without a dissenting vote,” Johnson recalled.

Now, more than three years later, the Commission is seeing their efforts realized. They have engaged an editor, J. Daniel Pezzoni of Landmark Preservation Associates in Lexington, VA. He has met with the Commission’s Book Committee and set out the scope and sequence of the editing process.

“At our last meeting, the editor made a detailed report to the entire Commission,” Johnson said. “The Book Committee (composed of members of the Commission and advisors/consultants from around the county) have met numerous times to view/discuss images taken by the survey team and those housed in University repositories and files of the North Carolina Department of Archives and History.”

Johnson added that each of the different townships and communities represented, if not already, will have delegations to view the images for their input and approval.

“This alone has caused much interest and excitement among those who participated.  Excited anticipation for the forthcoming completion of the book and its impact on our area goes without saying,” Johnson remarked.

Completion The book is expected to publish prior to Christmas of 2015, just in time to make for a special gift as well as a cherished keepsake.

Johnson encouraged Hertford County citizens to donate the use of their family’s historic photos to be published in the book or to contribute funds (tax deductible) to this worthwhile cause. The Murfreesboro Historical Commission can be contacted at 252-398-5922.

“This book will hopefully bring our county’s citizens closer together with pride and ownership,” she concluded.

Members of the Murfreesboro Historical Commission are appointed by the Governor serving a specific term.