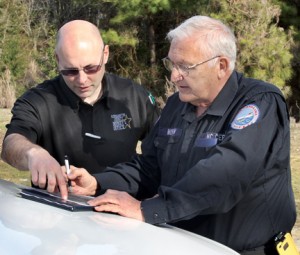 Northampton County Sheriff’s Captain Chuck Hasty (left) and CERT leader Mac Morgan study a map of a wooded area searched earlier this year in the case of a missing man. Hasty was named earlier this week as the new Police Chief in Roanoke Rapids. File Photo

“I’ve been fortunate enough to work with Chuck at the Department of Corrections,” Jackson said, “and we have a good relationship. We will continue to strive to move the city forward in the future and provide the citizens with the best customer service possible.”

Hasty was pleased with the announcement, saying, “It means a lot that they have confidence in me to lead the department forward and trying to build the trust of the department and the citizens of Roanoke Rapids.”

Hasty said he saw the position as way to lead a department and advance his career.

“We’ll focus on being more community oriented,” he said, and, “working with the young people in helping them to become productive instead of destructive.”

He said he plans to tap all community services available in his tenure as chief.

Asked about the recent controversy between the city and the Halifax County Chapter of the NAACP concerning the city’s hiring practices, he said, “I’m going to work with all citizens and treat everyone fair and with respect.”

Working with the Northampton County Sheriff’s Office since August of 2013, Hasty said he was appreciative of the support given him by Sheriff Jack Smith.

“He’s helped me a lot, teaching me the administrative stuff that goes on. He’s a great man and great law enforcement officer,” Hasty stated.

Numerous people supported him in his bid to get the job.

“I give credit to God. It wouldn’t have happened without all the prayers from many different people,” he noted.

Hasty, 43, began his career in law enforcement as a corrections officer in 1991 and has served in various capacities for the Halifax and Northampton County Sheriff’s offices.

“I am pleased that the selection process has successfully concluded with the appointment of Chuck Hasty as police chief,” Scherer said in a statement. “We had a field of outstanding candidates for the position which made the final selection a very difficult decision. I have every confidence that Chief Hasty will distinguish himself as a visionary and effective community leader. His experience and management abilities are an excellent fit for the department at this point in its history. He will be a valued addition to my management team.”

Hasty has been married to Tonya Denise Hasty for almost eight years. She is a nurse at Halifax Regional Medical Center. He has a son, Trey, who is a sophomore at East Carolina University. He has two daughters, Macie, an eighth-grader at Chaloner Middle School, and Karson, a fifth-grader at Manning Elementary School.

(Lance Martin is Editor and Publisher of www.rrspin.com. This article is published with his permission.)