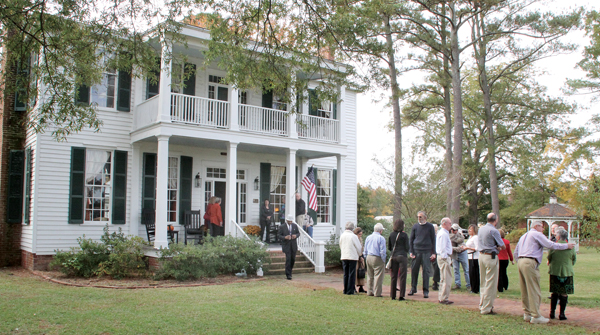 A small portion of the crowd attending the Nov. 9 event gathers near the main entrance of the Wiggins-Savage House, a plantation home saved from near ruin by a New Jersey couple. Staff Photo by Cal Bryant

CORAPEAKE – Beauty is always in the eye of the beholder.

When John and Susan Shultis arrived in Gates County from New Jersey in 2008, they were greeted by a once stately plantation home that had fell victim not only to a long period of sitting vacant, but the wrath of a hurricane as well. 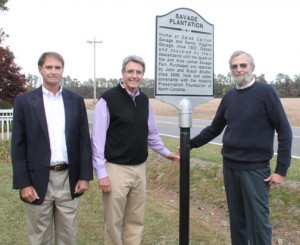 On Sunday, Nov. 9, a dedication ceremony was held to introduce the partners in this labor of love. The ceremony included the unveiling of a roadside marker that tells the history of this pre-Civil War residence.

The plantation house was built by Caleb Carlton Savage around 1854. It is a vernacular house built in the Greek Revival style. It retains all of its original architectural features and many of its original finishes, including six fireplaces. The front porch was restored to its original configuration based on an 1894 photograph.

The property retains several original outbuildings, including a two-sided slave house, a smoke house and a log paddock. On the property are pin oaks, willow oaks, pecan trees, old pines and a Scuppernong grape arbor.

“From the beginning we have lovingly restored the house after the damaging effects from Hurricane Isabel and were able to maintain the integrity of this Gates County gem,” said John Shultis.” We restored all the porches, the fireplaces and added new mechanicals. We were challenged by adding bathrooms to a house that was never designed to having bathrooms.

“After living in and working on the house for six and a half years we have a respect for the craftsmanship and design of this old house. We hope that others who see our house will be inspired to have the courage to tackle a restoration project of their own,” Shultis added.

John and his wife, both retirees, had previously restored three homes, all different styles and all in New Jersey.

“Then we both retired and wanted to look at another restoration project, but we wanted one in a little warmer climate than New Jersey….that’s the reason behind our decision to find a home like this in the south,” he stated.

The couple opted to visit the Preservation North Carolina website to aid in their search for the perfect “fix-me-upper.” Six properties were listed, and the couple made on-site visits to three.

“This was the one my wife wanted,” said Shultis of the Wiggins-Savage House. “It was love at first sight.”

The last line of descendants to live in the 1850’s circa home was Alice James Savage Furr, and her husband, Hal. John and Susan Shultis purchased the home in 2008 from Carlton and Ren Williamson through Preservation North Carolina. The Williamson brothers are the great-great-great grandsons of the home’s original owners, Caleb Carlton Savage and his wife, Nancy Wiggins Savage. 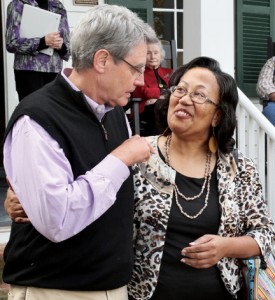 Wiggins-Savage family descendant Carlton Williamson chats with Cheryl Jenkins whose ancestor worked as a slave on the plantation. Staff Photo by Cal Bryant

The purchased property only includes the homestead and outbuildings, which sit on four acres. The farm remains in the ownership of the Williamson brothers.

The Savage Plantation is listed in existence in 1802. Shultis believes the home constructed in 1854 was built encompassing portions of the original structure.

Carlton Williamson, an attorney living in Whiteville, expressed his gratitude those responsible for saving the family’s historic home.

“We’re here today to dedicate the (roadside) marker for this house, but also here to pay tribute to the Savage family, Preservation North Carolina, and to a very special couple; had they not taken on this project with love and dedication, we wouldn’t be here today,” Williamson stated.

Rebecca Riddick Bradshaw shared her memories of the Savage Plantation. Although not related to the Savage family, she grew up on an adjacent farm. What she shared was handed down by Alice James Furr.

Bradshaw said that while the plantation home was under construction (an eight-year process), Caleb Carlton Savage and his wife resided in what was later used as the slave quarters. The couple had two sons, John and William Jesse Savage.

William Jesse married Alice James Eure, the daughter of Mills Eure. They had four children: Carlton, Tom, Tucker, and Sarah Willey Hortense Costen Kittrell Savage, the latter was married to Jim Costen in 1897 in the plantation home; one of four in the residence. Mr. Costen died of pneumonia before the birth of his daughter – Alice James Costen, the grandmother of the Williamson brothers.

As the years progressed and the next generation of the Savage family found comfort in the homeplace, Bradshaw recalled being the flower girl during the wedding of Alice James Savage and Hal Furr, held at the plantation in 1947.

“Ren and I have a lot of memories visiting this fine, old home,” said Carlton Williamson. “It was a sad day for all of us when Annie (Furr) died in 2001. That’s when Ren and I became owners of this property. We really had no idea of what to do with this house. It meant so much to Annie.”

Williamson recalled the damage inflicted to the home by a tornado that spun off Hurricane Isabel in September of 2003.

“It took down the columns of the front porch; we were heartbroken when that happened because we didn’t know if the house was salvageable,” he said. “I was talking with a friend of mine, Peter Rascoe who lives up in this area, and I asked him if he knew of someone that could help us save this special place, our heritage. He suggested Preservation North Carolina.”

Claudia Deviney representing Preservation North Carolina was on hand for the Nov. 9 event.

“We’ve done a lot of good work in Gates County, but I must say this is my favorite property,” Deviney stated. “It’s a perfect project – a great house with equally great outbuildings; perfect because I found great buyers who were willing to take our preservation advice; and great property owners in Carlton and Ren Williamson.”

Deviney said there were many individuals who looked into purchasing the property.

“The Shultis have been wonderful; their dedication became best known to me when we were working out a purchase price and they shared a letter with Claudia, which I’m going to share with you,” said Carlton Williamson. “It reads: the Carlton Savage Plantation house is our last and most important restoration. It will never be the Shultis house. We are only the caretakers of a piece of American history that should not be lost. We promise to restore, preserve and revere this wonderful house to be the best of our abilities.”

Not only have the Shultis saved a piece of Americana, they have become involved in the local community. They joined ParkerMethodistChurch.

“The members of that church knew the history of the Savage family and they helped us understand that history,” Mr. Shultis remarked. “It’s always been our aim to preserve this house for future generations to enjoy. We want this house to stand long after we’re gone. I thank Carlton and Ren for believing in us in what we want to do here.”

Another key part of the history of the Savage Plantation also surfaced at the Nov. 9 event. Cheryl Knight Jenkins spoke of her great-great-great grandfather, Adell Savage, who was among the 91 slaves that once worked on the plantation.