MURFREESBORO – Two men with their respective roots dug deep in the fertile soil of the Roanoke-Chowan area took different roads towards induction into the Jim Garrison Hall of Fame.

But they do share a common bond – a love of Chowan University. 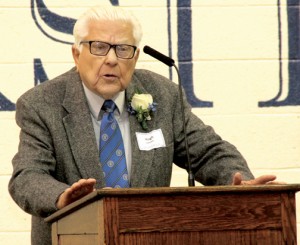 Hugh Vincent (above) and Fred Vinson (below), both of Murfreesboro, are shown offering remarks during their enshrinement into the Jim Garrison Sports Hall of Fame at Chowan University. Staff Photos by Cal Bryant

Vincent, a native of Southampton County, VA who has spent the past 50-plus years in Murfreesboro, has a deep passion for Chowan athletics, evident through his support of the capital improvement projects for the football and baseball facilities. He has endowed four athletic scholarships, two in support of men’s basketball, and one each for football and baseball.

Dr. Chris White, Chowan’s President, inducted Vincent into the Hall of Fame, calling him a “true and loyal friend and supporter of the University.”

“He’s a church man, a businessman, he’s honest and trustworthy, and he loves athletics,” White said, adding that Vincent was also deeply entrenched in the Murfreesboro community through the Rotary Club and Historical Association. 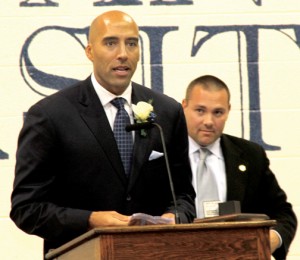 “Chowan is a great place,” Vincent said. “I enjoy going to Chowan athletic events and proud to see this University grow and succeed. Things are moving along well here.

“I’m thankful for this award and thankful that I’m able to help Chowan,” Vincent added.

Vinson, who was voted in for induction several years ago but was not able to attend due to his duties as an assistant coach in the NBA, is perhaps the best-known local athlete to play at Chowan (1989-1991). The 1989 graduate of Northampton County High School-East received very little playing time during his freshman year at Chowan, but things changed in a hurry one season later.

Known for his strong work ethic and academics, Vinson was named Most Outstanding Male Athlete, Region Ten Player of the Year, First Team All-Region Ten All-Conference, Carolina JUCO Conference Player of the Year, All-Tournament Region Ten, and Most Valuable Player during his sophomore season. That drew the attention of another legendary basketball coach – Bobby Cremins at Georgia Tech. There, Vinson further developed his skills and was named MVP for the 1993-1994 season, where he was the team’s third leading scorer. An outstanding long-range shooter, Vinson led the Yellow Jackets in three-point field goals (70) and three-point percentage (.402) in that same season.

After his college career, Vinson went on to play for two NBA teams, the Atlanta Hawks and the Seattle Supersonics. He finished his professional playing career overseas.

Filling in for his dad, the legendary Bob Burke who was ill and unable to attend the induction ceremony, Rob Burke had the honor of inducting Vinson into the Hall of Fame.

“I wish you could have seen all the hard work Fred put in to become the player he was back then,” Burke said. “My dad always had great teams, great players when Chowan was a JUCO (Junior College) and that was the same when Fred was here. But Fred was different because nothing was never given to him; everything Fred Vinson accomplished in life was earned through hard work and a drive that runs deep inside, one that makes him the success he is today.

“It’s a long way from Murfreesboro to Louisiana; in between there’s a road named self-made,” Burke continued. “Nothing was promised to Fred when he came to Chowan, other than a hard time with my dad. As a freshman walk-on player he only took 18 shots the whole season. But the road quickly changed by the time he became a sophomore, a 24-6 season. That road led to Georgia Tech and the ACC. Fred still holds the record for eight made three-pointers in the DeanSmithCenter vs. UNC.

“That self-made road, that work ethic led to him playing for two NBA teams, playing with the best players in the world and now as an NBA coach for the past eight years. That self-made road has no end for Fred. But today that road leads home to Murfreesboro and into the Jim Garrison Hall of Fame,” Burke concluded.

“This means so much; standing here before family, friends and this community….thank you for all your support over the years,” Vinson said.

He recalled his original dream, that of playing for the legendary Dean Smith at UNC. However, that road led in another direction.

As is Vinson’s demeanor, he thanked all those in his life that steered him on the straight and narrow path towards success. But of all those mentors along the way – to include his mother, his wife and three sons, his high school coach and his uncle – he saved the most emotional remarks for his grandmother, Margaret Hicks of Murfreesboro.

“She is my heart; everything I always wanted to do in life was to make her proud,” Vinson said. “She worked so hard in life; she did what needed to be done. Maybe that’s how I developed my work ethic, from watching her. She is the single-most reason I’m standing here today. She is the reason I set and reach lofty goals. She signed my loan papers to attend Chowan. She believed in me.”

“He fights for people he loves and he fought for me, just like he did for all his players,” Vinson said, choking back the tears. “What we did in return was for coach Burke. I’m so grateful for the opportunity to play for him….to be one of the chosen.”

Along with their Hall of Fame plaques, each new inductee was presented a ring.

The latest class brings the number of Hall of Fame members to 133. The first five were enshrined in 1985.