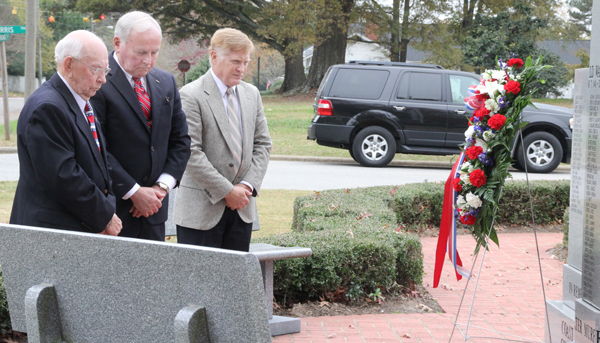 MURFREESBORO – He was only 19 years old, the son of a Martin County sharecropper, handed a rifle and sent to a strange land to protect what he took for granted back home – freedom.

The story of Jack Smith is one that could easily be repeated all across the United States by those brave Americans who were thrust into the ravages of war in a foreign land. Many, like Smith, were just teens at the time, and made the quick transition of becoming a man. The majority, like Smith, made it home alive, launched successful careers and raised families. Others weren’t as fortunate….their lives ended by a faceless enemy.

What they all share as a common bond is the pride that swells in their hearts and souls on Veterans Day.

Smith, a career law enforcement officer who now serves as the Sheriff of Northampton County, was the keynote speaker of the annual Veterans Day event held Tuesday morning at the Murfreesboro Municipal Building.

“Our military might is the strongest on the face of the earth and I was proud to serve,” said Smith, a former Marine who had a tour of duty in Vietnam before returning home to begin a law enforcement career that now spans over 40 years. “Our different branches of the military – Army, Navy, Marines, Air Force and Coast Guard – have each played a significant role in our nation’s proud history since 1775.”

He also recalled the time of the military draft.

“Think about that for a moment; you are a young man sitting at home, perhaps with a wife and children, and Uncle Sam calls and wants you to serve in the military,” Smith stressed. “If you were healthy enough, you were drafted. You had to leave your family behind without any notice and go fight in a war. We went honorably and we served; we were mature for our age and acted like men.”

And they put their lives on the line, day in and day out, without a lot of financial gain.

“I made $100 a month….after taxes that came to about $86,” he recalled. “I came close to getting killed numerous times, but I survived, and it wasn’t because of something great that I did, but rather I strongly believe it was God protecting me because I was raised to honor my mother and father, and the other elderly people in my life. I believe that the good Lord showed favor to me, and many other veterans, because of the way we were raised.

“I want to thank each and every veteran, and we have to remember that when our military is overseas or wherever Uncle Sam sends them, someone is back home taking care of his or her family. They must be remembered as well, those at home doing the things necessary to keep the family together. Thank you for what you do at home,” Smith closed.

World War II veteran Joe Dickerson of Murfreesboro, a four-time Purple Heart recipient for action he saw during D-Day and the Battle of the Bulge, shared his thoughts about being a proud military veteran.

“I woke up this morning thinking about Veterans Day and what our veterans went through,” Dickerson said, his voice filled with emotion. “I know that many of you, particularly the ones in combat, didn’t know from one day to the next if you would see tomorrow. Some of us did, some of us didn’t. I know from my own experience that I would dig a foxhole at night and would lay down looking at the moon, wondering if I would see it again. Thank goodness I see that moon nearly every night.”

Murfreesboro Mayor John Hinton welcomed those assembled – a standing-room only crowd inside the main meeting room of the Municipal Building.

“This is a special day, one established as a day of remembrance, so let us remember all our veterans, especially those who are not with us today, those that paid the price and died on the field of honor. Let us remember them in our hearts. We need to honor those with us today, as well as those who are currently overseas protecting us from anarchy in the global war on terror. We pray that God will bring them home safely.”

The outdoors portion of the ceremony was highlighted by the lowering and raising of the flags by the Murfreesboro Police Department and local veterans, and the placement of a wreath at the center of the War Veterans Memorial.

Local son thanks Vets for their sacrifice