MURFREESBORO – An investigation is ongoing on the East Coast and West Coast after two separate shipments of marijuana were intercepted at the Murfreesboro Post Office. 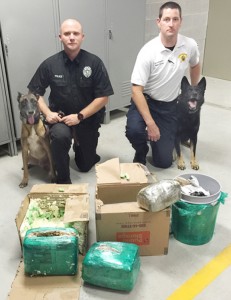 “No arrests have been made on either end thus far, but we are continuing our investigation, as are the police in Garden City, and we will continue until we are able to arrest all the subjects involved,” Rowe stated.

The first shipment, 10 pounds of marijuana, arrived Oct. 20 at the Murfreesboro Post Office.

“We were notified at that time and Lt. Joe Burgess launched the initial investigation assisted by Sgt. David Griffith and our K-9 ‘Jagar’,” Rowe said. “We were aided in the initial and subsequent investigations by the Hertford County Sheriff’s Office, their K-9 ‘Zeus’ and his handler, Deputy Tom Helms.”

Due to the use of the United States Postal Service (USPS) as a means to ship illegal narcotics, the FBI and the USPS Office of Inspector General also became involved in the case. Four ranking officers with the Hertford County Sheriff’s Office – Raymond Eure, Will Liverman, Dexter Hayes and Brian Pearce – are sworn agents with the FBI Task Force.

An additional shipment of marijuana – two packages combining for 18 pounds – was also seized.

“All of the agencies involved worked together seamlessly to seize these shipments,” Rowe said. “I thank everyone involved for all the long hours they have put in on this investigation. It isn’t over just yet, however, as we will continue to work this case until an arrest or arrests are made.”