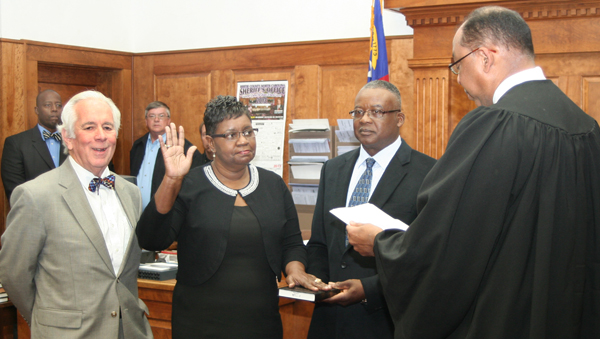 Vasti James is sworn in by Superior Court Judge Cy Grant (right) as the new Bertie County Clerk of Court following the retirement of long-time Clerk John Tyler (left). Tyrone James is also shown as he holds the Bible for his wife’s oath. Staff Photo by Gene Motley

WINDSOR – He’ll always be known for his bow-ties.

“It’s a nice little calling card,” smiles retiring Bertie County Clerk of Superior Court John Tyler on the eve of his final day in office as he sits in his less than spacious office in the Bertie County Courthouse, a painting of his grandfather, former solicitor Ernest R. Tyler, peering down from the wall. “A lot of people may not know my name, but they all seem to know the Bow-tie man at the courthouse.”

“Sometimes when I walk past someone (in the store) on a Saturday in a sweatshirt they almost fall out because I’m not dressed up and I’m not wearing my bow-tie,” he adds.

“I got it from (former NC Secretary of State and Gates County native) Thadd Eure,” Tyler says. “I met him as a boy and he used to come by and see my father and he always had his bow-tie and straw hat.”

Next to his bow-ties and his other distinguished, dapper apparel – which sometimes includes a seersucker suit or sportscoat – Tyler, who completed 29 years in office, would like to be known for something else.

“I’ve had as good a ride as anyone could have and I’ve enjoyed every minute of it,” he says reflectively. “And I’m thankful that the people of Bertie let me stay here all these years.”

Tyler began his clerkship in Windsor in 1984, with an appointment by then Superior Court Judge Richard Allsbrook. He was elected to his first full term over a year later.

“I had opposition two times,” he says, “and the other times I ran unopposed.”

A native of Roxobel and educated in the Bertie school system, Tyler first enrolled at the University of North Carolina in 1963 and from there had what he describes as a “well-traveled education career”.

“From Carolina I went to the ‘School of Hard Knocks’: the U.S. Army in the sixties”, he declares.

“I had an affinity for schools that started with ‘C’,” he chuckles.

Tyler returned to Bertie County where he was a magistrate for six years, helping with the family antique business and on the farm before receiving his appointment.

Tyler, who admits his age is 68, adds that up to 35 years of coming to the county courthouse.

“Over half your life is enough to come to any place,” he said as he roared with laughter again.

Admitting he’s barely ‘broken-in good yet’, Tyler says he wanted to retire before health issues became a concern.  After some close brushes with fate this past year he feels he’s coming out on top.

“I couldn’t have done any of this without a lot of good help,” he admits while rattling off the names of the deputy clerks and assistant CSC’s that have served during his tenure. “They’re been my right arms and made my job fairly easy. They kept up with the paperwork and I just tried to deal with the folks.”

Tyler also credits his relationship with attorneys and judges as he begins anew to name all the ones he’s served with and served under.

“When you stop and think about it, our system of justice from the sheriff and magistrates working: one issues and the other one serves, my office preparing the dockets and issuing the subpoenas, it’s amazing how well it all works.

“With all these parts involved, all working together it’s amazing we hold court every week and seem to get something done,” he added.

One of those Tyler has worked with over the years said she will miss his work ethic as well as his friendship.

“I have known John Tyler for over 20 years and am honored to call him my friend,” said Valerie Asbell, District Attorney for Judicial District 6B. “John is the epitome of a southern gentleman whose contribution to the citizens of BertieCounty is immeasurable. John is and has always been the consummate professional who treats every person with respect. I believe that he is the true example of a public servant. I am going to miss him tremendously in the courthouse, but I wish him God’s speed in this new adventure called retirement.”

Tyler says the criminal part of the judicial system is what catches people’s eye, but the civil part and the estate part are just as important.

“That’s where you’re working closer with people,” he says. “And with people who have a limited understanding since for most of them it’s the first time they’ve ever been to court. What’s helped me over the years is being courteous, mannerly, and polite and they just expect you to treat them the same way.”

Tyler says he leaves with just one regret: that he never went to law school. And while he has the time now he wants to spend the time catching up on his reading (his Kindle e-reader is backed up), a history buff , he’ll be touring the country and the world (he recently returned from a stay in Europe), and spending time with his four grandchildren.

And while he’s cleared out of his office, he won’t be a stranger around the courthouse to his successor, Vasti James, who was sworn in on Jan. 2.

“I’ll tell them about the files and what I know, but I’m not going to tell them what to do,” he warns with a grin. “They’re going to have to learn how to deal with that on the job like I did.”

Tyler leaves office as the 4th-longest serving Clerk of Court in the state of North Carolina. The NC Clerk’s Association in concert with the Institute of Government provides quite a bit of training.

“I tried to always send my folks to classes when they were offered,” he says now. “That’s the only way you can keep up.”

Tyler concludes by once again mentioning his gratitude to his assistants. “They did all the work,” he’ll say. “I just polished it up and put a little shoe-shine on it.

“When you’re the defendant, every case is important, whether you’re in court for a speeding ticket, or whether you’re being charged with murder.  I’ve seen some people in court charged with doing 70 in a 55 more nervous than someone on trial for murder. That may be that person’s only time in court in their lifetime, so they’ve got a right to be nervous.”

One of Tyler’s best memories is of young people experiencing court for the first time; and later getting to stage a mock-trial themselves.

“It always fascinates me,” he says, smiling, as the interview concludes. “Most of those little ones always want to want to play the bad guy.”

WINDSOR – There’s a saying that one stranger’s best impression of America just might be you. If that was the... read more