Despite a setback, “Spike” the rhino has returned to the delight of many who either live or pass through the tiny Bertie County community of Trap.

In past years, Spike’s owner, Peter Woglom, would dress the fiberglass creature for selective holidays, but Christmas time was the one that most would look forward to seeing how Spike would celebrate the season. 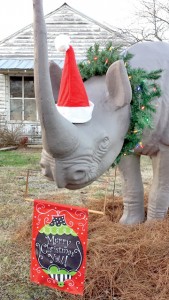 Following a “brush with death”, Spike the rhino has fully recovered and returned to his popular perch along NC 42 in Trap for all to see during the Christmas season.

However, Spike’s absence was noted in advance of Christmas 2013.

“Spike has been laying low for the last year recovering from a serious tractor/rhino collision resulting in a severely damaged back leg,” said Woglom. “I’m to blame for that as I ran into him with my bucket while moving him this past January.”

Woglom added that Spike is now in “tip-top condition.”

“Spike decided to tone it down a bit this year by adopting a more traditional southern Christmas look,” said Woglom. “This year’s theme is Merry Christmas Y’all.”

After years of weathering hurricanes, changing seasons, and general wear, there was some question as to whether Spike was a safety concern for those walking or driving through downtown Colerain.

When Jim Edwards, owner of Western Taxidermy, noticed that Spike might be ready to retire from his duties, the rhino was extracted from the platform on which he rested. He was moved to the back of the taxidermist shop that specializes in African Taxidermy and Reproduction Taxidermy. It was from there that Woglom noticed Spike from his office at Colerain Primary Care.

Woglom can remember Spike atop the storefront when he and his family moved to the area in 1993.  Once the rhino’s duties as chaperone of Colerain had ceased, Woglom offered to purchase Spike from Edwards, in hopes to prevent losing the town’s mascot. When that purchase was complete, Spike went to live with the Wogloms.

Just as he graced the storefront he decorated for so many years, Spike continues to bring pleasure to those who happen to be driving through rural Bertie County.

AHOSKIE – Caught in the act. Two Aulander residents stand charged with attempting to break into a residence on East... read more