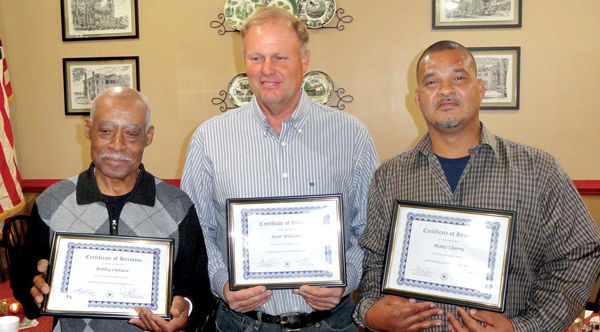 From left, Bobby Outlaw, Kent Williams and Monte Cherry hold the Certificates for Heroism awarded to the trio for actions they took on July 11 to save a passenger of a burning car at an accident scene on US 13 near Powellsville. Contributed Photo

You never know what life will hold when you wake up each morning. For a trio of Powellsville men, July 11 is one they will never forget.

Bobby Outlaw, Kent Williams and Monte Cherry were recently honored with Certificates for Heroism as bestowed by the Bertie County Republican Party.

On July 11, the men witnessed a horrific auto accident on US 13 just south of Powellsville. There, according to a North Carolina Highway Patrol report previously published in this newspaper, a car was traveling northbound on US 13 and somehow veered left of the center line into the left-hand lane. The vehicle continued traveling left off the road into a ditch and from there struck a utility pole, then struck a tree before bursting into flames.

Three individuals were in that car….the driver and one passenger did not survive the fiery crash. However, Outlaw, Williams and Cherry – ignoring their safety by rushing towards the burning car – managed to pull one other passenger away from the inferno. That man is alive and well today, according to Garry Terry, Chairman of the Bertie County Republican Party.

“Bobby, Kent and Monte were all traveling separately on US 13 at that time,” Terry recalled. “They saw what was taking place right before their eyes. They didn’t hesitate; they took action while emergency response units were en route to the accident scene. They cut the seat belt that was holding the man and pulled him from the burning vehicle.”

Unfortunately, the driver and another passenger did not survive the accident.

“After pulling the man to safety, they did manage to get to the female passenger, but she had already succumbed due to injuries she had sustained,” Terry said.

“The actions taken by these three local heroes saved a man’s life and we are grateful to have citizens who will put themselves at risk to save others,” Terry added.

Hertford County GOP Chairman Charles Jones also commented on the bravery of the three men, saying, “They did this without any protective equipment at all. They did this bare handed, without gloves or fire suits to protect them from the dangers of the burning car”.

The awards were given at the annual Bertie and Hertford GOP Christmas Party and was attended by Representative Paul “Skip” Stam, Speaker Pro Tem of the NC House of Representatives. The event was held at the Town House Restaurant in Windsor.