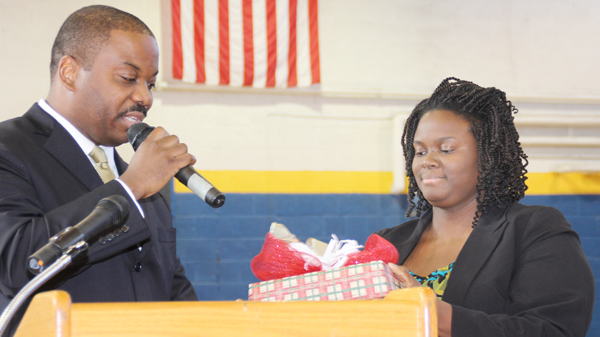 Rhonda Holmes accepts a gift from Dr. Eric Bracy, Superintendent of Northampton County Public Schools, after she was named as the North Central Region Teacher of the Year, now becoming one of the nine finalists for the statewide honor. Staff Photo by Cal Bryant

CONWAY – If she was the superstitious type, Conway Middle School (CMS) teacher Rhonda Holmes could have easily placed the blame on her hectic day as being Friday the 13th.

She couldn’t locate her car keys after being completing her call of duty to help out at Northampton High School that morning. Then, an impatient acting School Resource Officer hurried Holmes along to return to CMS. Upon her return she was asked to join in on what she later learned was a fake search for a missing student. All the while she was supposed to be in the gym at 12:30 p.m. for a school-wide anti bullying session.

“When I finally made it to the gym for the assembly, everyone was already there and I felt bad because I was late,” Holmes said in a later interview. “Then I looked over and saw my family seated on the front row. I knew then that something was up.”

“Education is my purpose; it’s what I’m here for first and foremost,” Holmes stressed. “I’m here to help others.”

As for the regional honor, Holmes said she would do her best at the state level to represent the North Central area.

“As you may have figured out by now, this assembly is not about bullying,” said Dickerson. “North Carolina looks for a teacher that represents the very best in teaching in our state. They look for a teacher that leads in the classroom and in the school. Out of 95,000 teachers in our state, one of the nine Teacher of the Year finalists is right here today.”

Dickerson praised Holmes as an “awesome teacher” – one who is able to incorporate the arts into other educational disciplines.

“She is a lifelong learner, a lifelong teacher; you can always find her at after-school functions supporting her students,” Dickerson added. “She also tutors her students after school. She is always looking for grants and searching for new ideas to help make her students more successful.”

As Holmes made her way to the podium to accept her honor, the roar from within the CMS gym was deafening.

“We’re so proud, so honored to have one of our own earn this esteem honor,” said CMS Principal Oliver Holley.

But of all the accolades she received on Friday, perhaps the most touching moment came from one of her young students – Denzel Richardson.

“Miss Holmes is a thoughtful, helpful and caring teacher,” said the sixth grader. “I speak on behalf of all her students when I say thank you, Miss Holmes, for all your love and support. You are a great teacher.”

“Not only is Miss Holmes ranked as one of the best teachers in North Carolina, she is one of the finest persons I’ve ever dealt with over my career as an educator,” Bracy remarked. “We thank you for all your wonderful work. You do what you do for all the right reasons….you do this for the students. You have joy; you have love in your heart for our young people. We encourage you to keep on doing what you’re doing because you do it so well.”

Marjorie Edwards, Chair of the Northampton County Board of Education, also offered remarks.

“We’re blessed to have a person that certainly loves what she does,” Edwards said of Holmes. “She cares; she is truly a blessing to her students and they recognize what she does. Now this town, this county and this state will recognize what we have in Rhonda Holmes.”

The accolades for Holmes were not just limited to her peers in education.

“Rhonda is such a beautiful woman, outside and in,” said her uncle, Gregory Moore. “We’re so proud of her.”

In closing, Oliver promised there would be an additional assembly sometimes in the near future.

“The next one we have will be to recognize Rhonda Holmes as North Carolina’s Teacher of the Year,’ said Oliver, his final words drowned out to a roar of approval from the crowd.

In early September, Holmes was named as the Northampton County Schools district Teacher of the Year. That moved her to the regional competition, where she presented a portfolio of her work, education philosophy and tangible artifacts demonstrating her effectiveness as a classroom teacher committed to facilitating 21st century teaching and learning skills to her students.

Holmes is a 1999 graduate of Southeast Halifax High School. She continued her education, receiving a BA in Studio Art from Elizabeth City State University in 2003.

She taught art at Northwest Halifax High School for two years prior to accepting the job at CMS at the start of the 2006 school year.

Other than her classroom duties, Holmes is also the Cheerleading Coach at CMS. She is also a member of the School Improvement Team, a STEM Coach, chair of the Elective Team, and a member of the Technology Team.

Her eye for the arts has landed her on the Northampton County Cultural Arts Committee. There she serves as the Artist Coordinator, developing art-based workshops for students and bringing in artists of all mediums for all age groups to enjoy.

“I try my best to incorporate all educational disciplines – history, English, science and math – into art,” Holmes said in a later interview. “We try and teach the whole student; stand in the gaps to make sure our students have a chance to be successful.

“We have some great teachers in Northampton County and all across our state; this honor means I’m representing them, not me. They, like me, devote everything they have to teaching young people. It’s often a challenging job, but it’s a challenge I’ll never back away from,” she concluded.

What started as a hectic day on Friday proved otherwise. It was followed 24 hours later by another accolade for Holmes….the awarding of her Masters Degree in Visual Arts on Saturday from Norfolk State University. For Holmes, education is a never-ending task.

COMO – What began as a response to a domestic dispute ended with the bust of a marijuana growing operation.... read more