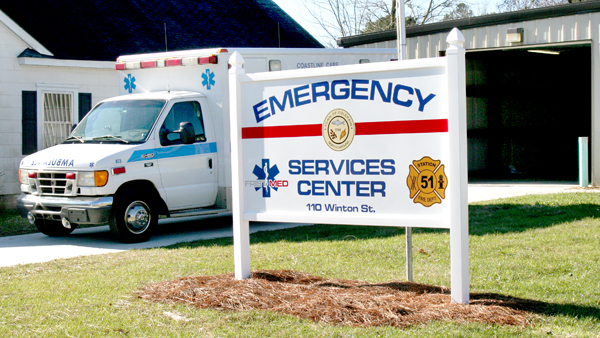 In the aftermath of First Med’s downfall, Bertie County local government has put together a plan to operate an Emergency Medical Services (EMS) system. Shown here is a unit ready to roll on Friday morning from the station in Colerain…one of three locations serving the needs of county citizens. Staff Photo by Gene Motley

WINDSOR – It’s been a smooth transition.

First the county declared a state of emergency and also proceeded to pursue legal action against First Med.

Then the county hired all 24 full-time and some 30 part-time former First Med EMS employees and the service never missed a beat.

The Bertie County Emergency Services, LLC, with an EMS agency license that is good through December of 2019, had been born.

Thursday, the Bertie County Board of Commissioners heard the latest update and voted authorization on several related items in order to maintain the highest professional level of emergency ambulance service in the county.

“There’s been a lot of activity here since Monday morning and I want to publicly thank you for the bold decision you made Monday to put us in gear,” said County Manager Scott Sauer as he addressed the board. “We’ve assembled what I’d like to call a ‘Rapid Response Team’.

Sauer went on to praise county Emergency Services Director Mitch Cooper who worked closely with state agencies since the emergency declaration, even securing the ambulance license.

Sauer also complemented the Bertie County Sheriff’s Office and Sheriff John Holley for their assistance in the transition. The assistance includes use of an unmarked patrol car as a first-response vehicle by Matt Leicester, who remains on board as Director of Emergency Operations, a post he previously held with First Med. The BCSD’s 9-1-1 Center has also helped with new communications equipment in the form of cell phones to assist the ambulance staff in answering calls.

“Vehicles have been posted, buildings have been posted, equipment has been labeled, and the chairman (Commissioner J. Wallace Perry) even did some of the posting at the Colerain site for us,” said Sauer. “The mayors in Colerain and Aulander have also helped out.”

“I want to assure you we’ve got the situation under control,” Sauer concluded. “You’re in good hands, we’ve had a great couple of days thanks to Mitch; and he has got everybody working together.”

Sauer then presented several requests for the board to act upon related to the transition: a temporary budget for the operation through the end of the fiscal year (June 30, 2014), a fee structure showing the charges for services and a means of collecting, a billing consultant, and the establishment of temporary job positions based on a model submitted by Washington County.

Chairman Perry then thanked Sauer and staff for their work and after a presentation by an out-of-town medical transport group and public comments were heard, the Board got down to consideration of the proposals.

The Board discussed the various financial projections, and voted unanimously to approve an amendment to the county budget that would make approximately $1.2 million available to continue emergency ambulance services through the end of June 2014.

The Board also established a schedule of fees ranging from $900 Specialty Care Transport to Non-Emergency Life-Saving Service at $400.

Included in the budget amendment is $45,000 in Capital Outlay expenses that Bertie County will use to purchase five late model ambulances from MedEx Medical Transport Service, Inc. of Ahoskie. There was a proposal to lease the vehicles, but a question of insurance tabled that idea.

“It’s not to say every vehicle is perfect,” said Sauer. “There’s going to be a little maintenance here and there.”

Sauer also pointed out because there are still options available,  should the county decide to move in a different direction such as if the equipment would not be further needed then Medex would buy the vehicles back.

Commissioner Ronald Wesson asked if the vehicles will come fully-equipped and Cooper said they were except for two gurneys (stretchers) that will be purchased immediately through a fund provided by the state to complete the vehicle’s medical equipment.

“Everything else is in the trucks,” Cooper maintained. “We have secured an account with a supplier to get our medical supplies and what we have on the trucks now they already have that supply list to keep us up and going.”

Next came the approval of contracting for billing and collections which would be done through EMS Consultants of LaGrange, Georgia. That company handled Bertie’s emergency ambulance billing prior to First Med. EMS Consultants has offered Bertie County a 5.5% service fee on monthly net collections, and will also provide six mobile computers, all software, and technical support services beginning around the middle of the month on Dec. 16.

“They understand our system and understand what our needs are,” said Cooper. “They’ve offered to be here and ready to go on Monday morning and we could be up and going by Tuesday.”

Lastly, Cooper and Sauer recommended that the Board approve the establishment of temporary staff positions using the job description model from WashingtonCounty. The Board took no action on this topic but said that it would be discussed in detail at a later date.

Each of the other requests were voted on in order by the Board and unanimously approved.

More public comments followed after which the Board went into closed session to discuss the litigation against First Med.

Earlier this week, Bertie County was granted a Temporary Restraining Order (TRO) in Superior Court. In the complaint, signed by Sauer, the County sought action on First Med’s contract performance bond of $310,000 per year for a five-year contract which comes to a sum of some $1.55 million.

The county is also seeking financial relief from First Med under several legal claims including unfair and deceptive trade practices, as a result of the company’s misrepresentation of its financial status. Copies of First Med’s financial statements were attached to the official complaint which was filed by Assistant County Attorney Jonathan Huddleston.

Above and beyond the call of duty

WINDSOR – He doesn’t wear a cape or a costume with an ‘S’ on his chest, but Superman and Bertie... read more