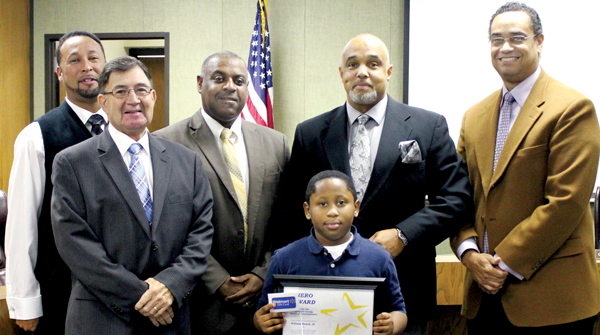 William Bunch, a 3rd grade student at Bearfield Primary School, poses with Hertford County Commissioners (from left) Howard Hunter III, Johnny Ray Farmer, Ronald Gatling, Curtis Freeman, and Chairman William Mitchell at the Commissioner’s meeting on Monday. Bunch is credited with saving his family from a house fire at their home on Newsome Grove Road in Ahoskie on the morning of Nov. 1. In addition to the “Hero Award”, William also received a $20 Wal-Mart gift card. Contributed Photo

It was also “Homecoming.”

After 30 days of living in a local motel, Bunch, his parents, William Sr. and Sharon, his sister, Tonijah, and his grandmother, Marie Harrell, can finally return home.

And it’s because of young William that they’re even able to return to a home.

Monday, at the regular meeting of the Hertford County Board of Commissioners, William was cited for heroism with a special certificate for saving his family from certain tragedy in the early morning hours of Nov. 1 when their home on Newsome Grove Road in Ahoskie caught fire.

“It was a little before one in the morning when William came running in hollering that the house was on fire and full of smoke,” said Mrs. Bunch, recalling the nightmarish incident.

The entire family, including Mrs. Harrell, who suffers from Alzheimer’s disease, was able to all get out safely.

The Ahoskie Rural Volunteer Fire Department arrived at the home within minutes and was able to get the fire under control. The family wash room was destroyed and the four-bedroom 1400 square-foot home suffered smoke damage throughout the house.

With the family greatly inconvenienced by the incident, the fire caused William to miss a couple of days of school.  When his mother returned him to Bearfield and told both his teacher, Lisa Outlaw, and school principal, Julie Shields, what had happened, the ladies were so impressed with the story of William’s bravery, presence of mind, and quick thinking that they began to circulate word of his heroism.

Eventually, that word found its way to the ears of the Commissioners.

“I saved my family from a fire,” is all the youngster could modestly say of his courage and gallantry.

“I’m just excited and pleased he was recognized,” said Sharon Bunch. “I think children should be (lauded) when they do good things because people don’t always want to hear the negative stuff.”

WINTON – Another unprovoked assault – apparently part of a national craze known as the “Knockout game” – has netted... read more