MURFREESBORO – The only thing missing was the cold weather.

With temperatures feeling more like late September rather than early December, the 28th annual Candlelight Christmas Tour got underway here Thursday evening where hundreds of individuals took to the streets of Historic Murfreesboro to enjoy the sights, sounds and smells of the holiday season. 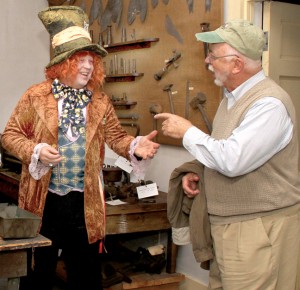 The Mad Hatter (aka Dennis Helsel) interacts with a guest as he shares the history of tinsmith Richard Evans during Thursday’s portion of the Candlelight Christmas Tour. Staff Photo by Cal Bryant

“We had about 260 pre-registered for Thursday’s portion of the two-night tour, and we always get a few late arrivals that we will not turn away,” said Jesse Woods III, office manager for the Murfreesboro Historical Association, the host of the annual event. “We get guests from all over. Roughly 50 percent are from the Hampton Roads area of Virginia.”

Judging by the comments overheard as those guests walked the candle-lit streets of the Historic District, all left Murfreesboro full of the Christmas spirit.

There were 13 stops on the tour, to include 10 within the Historic District. At many of the stops, guests were greeted by characters from Alice in Wonderland, as this year’s tour theme was “Christmas in Wonderland.” The opulent and flamboyant style of the time was featured on the tour where such iconic characters as Alice, the Mad Hatter, the Cheshire Cat and the Red Queen participated to the delight of adults and children alike.

At the Evans Tinsmith Shop, the Mad Hatter (aka Dennis Helsel, ChowanUniversity’s Director of Athletics) shared the story of Richard Evans, a Petersburg, VA transplant who came to Murfreesboro after the Civil War.

Chowan was also represented by Tom Brennan and Charles Futrell of its School of Graphic Communications. They demonstrated the old-fashioned way of printing.

In the ReaMuseum, Milton Vaughan was dressed in a full Confederate uniform, complete with an authentic sword, to represent the town’s involvement in the Civil War. His great-great grandfather was captured during the Battle of Bloody Angle, a 22-hour fight that claimed 11,000 men. An authentic dress used in the movie “Gone With the Wind” was also displayed. In another part of the museum, Gene Flowers held the interest of visitors as he told the story behind the invention of the Gatling Gun, a creation of a HertfordCounty native.

At the Winborne General Store, Hal Thomas, a member of the Murfreesboro Town Council, informed guests of the history of country stores of years ago.

Toe-tapping was welcomed at the Vincent/Deal Blacksmith Shop where a bluegrass band entertained the crowd. Over in one corner of the shop was a hearth where fresh local peanuts were roasted over an open fire.

The John Wheeler House was another stop, one that drew interest with its separate kitchen and open hearth.

While some guests of the tour walked the Historic District, others chose to ride, either onboard a lighted carriage drawn by two horses or a trolley pulled by a truck. All eventually wound-up in one place, the Murfree Center where a hearty country meal of ham, turkey, dressing, green beans and yams was served.

If there was room left in their stomachs, they ventured across Broad Street to the HertfordAcademy for coffee and cake. There, the talented duo of Chowan University President Chris White (on the piano) and community college professor Frank Harris (clarinet) performed a wide variety of holiday favorites. White and Harris recently released a CD – Yuletide Favorites: With Just a Touch of Jazz.

Also included on the tour were stops at the Murfree-Smith Law Office, the Agriculture/Transportation Museum, the Brady C. Jefcoat Museum, the historic Columns Building on the campus of Chowan University, and the Roberts-Vaughan House, the home of the Murfreesboro Historical Association and the Murfreesboro Chamber of Commerce.

More arrests made in B&E case

AHOSKIE – Two additional suspects have been arrested, bringing the total to three who face felony charges in a breaking... read more