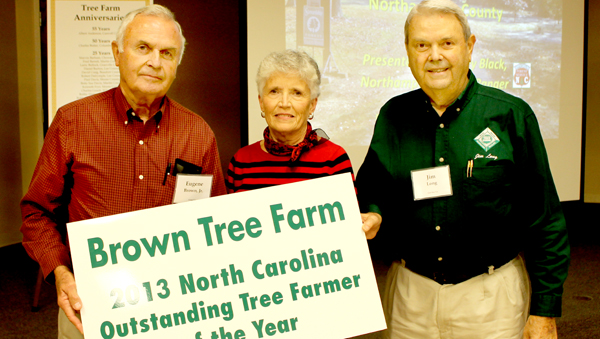 RICH SQUARE – If it weren’t such an arduous task, perhaps Eugene W. Brown Jr. would have individual names for each tree within his 787-acre tree farm located off Lovers Lane Road near here.

Minus the individual names, he can quickly reel off exactly how many acres are in each stand, and the year they were planted, thinned, and/or harvested….only to begin the life cycle once again.

And because he fully understands the concept of renewable natural resources as well as the importance of sound management practices, Brown and his wife, Opal, have earned the distinction of being named the 2013 North Carolina Tree Farmers of the Year. That award was presented earlier this month during the annual meeting of the North Carolina Forestry Association, held this year at the Wilson County Agricultural Center.

“It’s an honor to receive the award, but all the accolades need to be given to those that offered all the good advice about timber management, people like Rodney (Black, Northampton County Forest Ranger) and others within the forest management industry,” Brown said. “If you want to learn about tree farming, I would recommend you start with the Forest Service in your county.”

For the Browns, they turned what once was “low ground” farm land (250 acres of open fields), combining it with natural stands of timber, into what is now a neatly groomed and well-managed tree farm.

‘The open farmland that once was here was poor due to the fact that the soil was wet most of the time,” said Mrs. Brown. “It really had to be an exceptional year weather-wise just to break even when harvesting the row crops.”

What stands today began in 1883 when Mr. Brown’s grandfather purchased the original 34 acres. Eugene acquired the family farm in 1956. At that time it consisted of 535 acres. Five years later, the first Forest Management Plan was written for the Browns, thus certifying it as a Tree Farm in Northampton County.

One tract, planted in the early 70’s, has seen a pair of commercial saw timber harvests.

“I would have never believed I’d be around long enough to see it commercially harvested the second time,” said Mr. Brown, who has twice been the “bridesmaid” (NC Tree Farmer of the Year runner-up in 1989 and 2012) before becoming the “bride” in 2013.

“You just have to stick with it,” Brown said, referencing the time he spends daily (except Sundays) grooming the land, to include maintaining 6.7 miles of improved forest roads, all passable with a pick-up truck.

“Just look how clean it (forest floor) is, you can tell just how much work Mr. Brown puts in spraying (to kill the underbrush) and mowing,” said Black. “This land may have not been much for crops, but it sure can grow trees.”

Over the years, Brown has purchased smaller tracts of adjoining land to account for the 787 total acres.

Black referenced Eugene and Opal Brown as, “two of the most humble forestry landowners I have ever met.”

“They have taken their family farm and turned it into the best example of a working tree farm you will ever see,” he added. “He knows each and every inch of the property and works it daily, not as a chore, but as a passion. He often jokes with Mrs. Brown that he loves his trees more than he loves her. I know that’s not true, but his love for this land is apparent when you visit this property.”

Brown doesn’t mind showing the natural – and man-made (at his hands) – beauty of his tree farm, often hosting tours and field days.

He is a long-standing member of the Northampton County Forestry Association, serving 20 years as president of that organization. Under his leadership, the Association now has over 200 members within a county that boasts of 227,876 acres of forestland.

“He has promoted and continues to promote active forestry management, not just locally, but across the state,” Black said. “His tree farm and his work ethic of blood, sweat and tears is a shining example of what can be done on a working forest. He and his wife are most deserving of North Carolina Tree Farmer of the Year Award.”

Tracing its roots back to the 1940′s, The American Tree Farm System can lay claim to being the oldest form of certification or recognition system for the practice of growing trees and sustaining   sustainable forests in America.  For generations, American landowners and farmers have proudly posted their Tree Farm signs as a way of displaying their stewardship values.

North Carolina boasts 18.6 million acres of forestland.  85% of these forests are privately owned and roughly 64% of these forests are owned by private, non-industrial landowners.  Successful Tree Farmers believe that the key to sustaining our state’s forests is the sharing of information on various programs that are out there to assist landowners be better stewards of their forests.  The group also believes that North Carolina should pursue public policy that promotes forestry and the conservation of working forests and farms in the state.

To learn more, contact the North Carolina Forest Service office in your county.