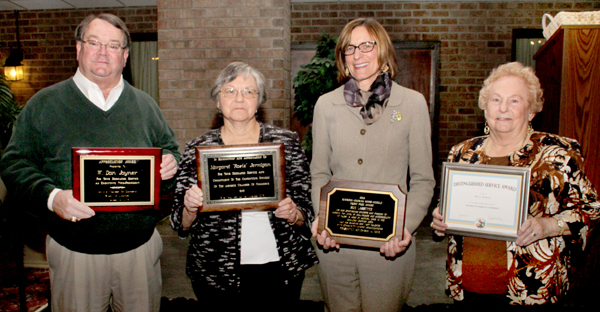 AHOSKIE – Healthcare is perhaps the most talked about issue across America today.

That topic was the focus of the keynote remarks made by Vidant Health President and CEO Dr. David Herman here Thursday night during the 70th annual Ahoskie Chamber of Commerce Banquet.

As expected, Herman talked about Vidant Health, mixing in how healthcare reform across the United States will impact this local medical provider that serves 1.4 million people in eastern North Carolina through nine owned or managed hospitals, physician practices, outpatient and home care services in 29 counties.

“Our mission is to enhance the quality of life for the people and communities we serve, touch and support,” Herman remarked to a large crowd gathered at the Ahoskie Inn. “Our goal is not just to take care of the sick; our goal is to keep people healthy. We have 1,500 hospital beds in eastern North Carolina, but there’s no one that wants to be in a hospital bed….that’s where preventive medicine comes in to play. We think of ourselves as a system of care, not as a system of hospitals.”

Herman said one of the major obstacles facing Vidant Health is the broad expanse of rural territory that the system covers.

“We can’t do all of this alone,” he stressed. “We have great partners and share our mission with the ECU Brody School of Medicine, our regional hospitals, county health departments, the various school districts, outpatient and private practices and home health and hospice. We join with them to provide a seamless level of medical care.”

Another key in the medical care within a rural area is retaining quality healthcare providers.

“We know if we train them here, the likelihood of keeping them here is greatly enhanced,” he said.

“Those program train the medical professionals of tomorrow to help provide care for our region today and in the future,” Herman remarked.

Compared to other areas of the state, eastern NC as a whole largely consists of rural communities with a few mid-sized urban markets; has a higher concentration of people over the age of 65 (15.4% for the eastern part of the state vs. 14.3% statewide); and has a significantly higher percent of the population without a high school diploma (18.3% vs. 16.0%).

Additionally, eastern NC has a higher percentage (32.7%) of children and adults living at or below the poverty level; has a higher percentage of uninsured people; experiences significant access issues to primary care and specialists; has average household incomes significantly below the state average ($49,932 vs. $58,413); and a higher concentration of minorities (41.5% vs. 33.7%).

On the medical side of those numbers, Herman pointed out there a higher mortality rate for diabetes, cancer, and heart disease, and that 19 of the 29 eastern NC counties have a higher percentage of the population considered obese than North Carolina as a whole.

“The reasons these diseases affect us is the tremendous social deterrents of health,” Herman said. “It’s stacked against us here in eastern North Carolina. We have to look for ways to make our population base more healthy.”

So, how does Vidant Health overcome those challenges, and at the same time stick to its overall mission while operating in the black?

“There’s been a lot of talk on TV and radio and in the newspapers about the economics of healthcare in the United States,” Herman stated. “We have a mission to keep people healthy and at the same time have to balance the financial books to have the money to get that done.”

Herman said last year at Vidant Health, the group provided more than $159 million in unreimbursed care, including charity care, bad debt and Medicare. He added that more than 70% of patients treated at Vidant Health hospitals and clinics are paid for by government programs with rates set below the cost of caring. Another 10 percent of the patients seen system-wide do not have any insurance at all (self-pay).

“At Vidant Medica lCenter, only 34 percent of our work provides a positive margin, and that margin is used to cover the losses of other critical services such as trauma, graduate medical education and children’s health services,” he stated. “A lot of my time and Sue’s (Lassiter, president of Vidant Roanoke-Chowan Hospital in Ahoskie) time is spent each day trying to figure out how do we get money from one bucket to put it in another bucket to make sure we take care of patients in need of medical care.”

Herman probed deeper inside the staggering costs of healthcare across the nation, saying that $2.8 trillion was spent on those services in 2012, which equates to $8,100 per person. Those costs, he said, have grown by 18.4 percent between 2005-2009.

As far as how the Affordable Care Act (ObamaCare) plays into the healthcare equation, Herman said it changes the rules of health insurance through the individual mandate (either have medical insurance or pay a tax). It also  requires coverage of certain conditions and preventive services; taxes high value insurance plans; and expands Medicaid.

The latter is a point of contention nationwide as the U.S. Supreme Court struck down mandatory Medicaid expansion, ruling it was coercive because of the large negative impact on states if federal Medicaid support is withdrawn.

“North Carolina has chosen not to participate in Medicaid expansion,” Herman noted. “What that means to medical providers and local hospitals, such as Vidant Roanoke-Chowan, it that they will receive disproportionate share funds. If your hospital takes care of more poor patients than the average hospital in the United States, you receive money from the federal government to help cover the cost of that care.

“In order to fund the Medicaid expansion, the federal government pulled those disproportionate share funds back to Washington, DC and disperses them through Medicaid expansion,” Herman said, adding that $5.6 billion of existing funding will be removed from NC hospitals over the next 10 years ($583 million to Vidant Health).

ObamaCare also changes government payment for care….paying for results and not just services. It provides incentives for coordination of care and healthcare value; increasing payments to providers who deliver value, decreasing payments to those who do not.

“Those of us who perform well get some of our reimbursement back, and I’m proud to say that the work that Sue and her team here in Ahoskie perform every day and to the other eligible Vidant Health hospitals, we’re getting more money out of the federal bucket than we put in due to the level of service and the medical outcomes we provide,” Herman stated.

“We know that the patients who need our care are not going away; we know the cost of their care is not going away, but we know a lot of the dollars that go to pay for that care are at risk,” he added. ‘That’s the hard work facing Vidant Health.”

Herman also touched on health insurance from another angle, stating that the reason why those companies ban coverage for pre-existing conditions is because otherwise people could wait to buy insurance until they were sick.

“That sort of like wanting to purchase homeowner’s insurance when there’s fire coming out of your windows,” he said.

But even those without health insurance cannot be refused care at a medical facility, but who pays for that?

“In reality, there’s a hidden surcharge on those who do pay for health insurance,” Herman explained. “Those costs are displaced to the commercial population. If you are a small business owner here in Ahoskie, that’s why your rates are so high. You’re not just paying for your healthcare, you’re paying for those people who either won’t pay or can’t pay for their insurance. This is the driver behind ObamaCare’s individual mandate. If all of us can take money out of the system, all of us should be required in some shape, form or fashion to put money back into the system.”

In closing, Herman said that more than 50 percent of health care cost is labor.

“This is the world we live in….care vs. dollars, we have to have both,” he said. “There is no one size fits all solution, but I’m proud to say that our Vidant Health hospitals lead the state in preventive health readmissions due to the great quality of services our out-patient clinics provide, and the close partnerships that Sue and her staff have built here with the local community health center and others.

“Leaving the healthcare solutions to Washington, DC or to Raleigh likely does not give us the best answer and advocating the design of the new healthcare system to others is not the way to live. We’re working very hard at the community level and at the system level every day to redesign healthcare that works for eastern North Carolina,” Herman closed.

The annual banquet included recognizing several individuals for their outstanding achievements. Marshall Cherry, president of the Chamber’s Board of Directors, presented awards to Rosie Jernigan as the Outstanding Member; Chamber Secretary Betty Rawls for the valuable services she provides on a day-to-day basis; to former Chamber Executive Vice President Dan Joyner; and to former Board of Directors President James Eure.

Sue Lassiter, president of Vidant Roanoke-ChowanHospital, was honored with the 2013 Roanoke-Chowan News-Herald Front Page Award for her continuing efforts and passion to improve the level of healthcare and accessibility to those in need of medical care in the Roanoke-Chowan area, and for sharing her vast talents with community-minded organizations.

AHOSKIE – It’s no big surprise that Howard Hunter III is seeking to move up the political ladder. The only... read more