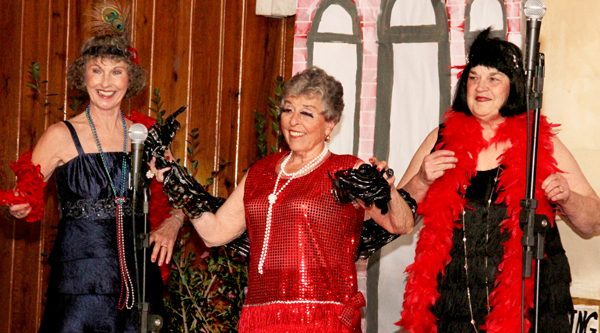 The “Dixie Darlings” were just one of the many groups and individuals to perform Saturday evening in Colerain during a fundraiser for the NC Baptist Men’s Disaster Relief Fund. Staff Photo by Cal Bryant

COLERAIN – It’s been said that laughter is the best medicine for the soul. If that’s the case, those attending an event here Saturday evening received a healthy dose.

“We welcome you to a walk down Main Street,” said Sheran White who served as the event’s hostess as well as taking part in several skits. “As you can see we have a miniature model of what Main Street in Colerain once looked like. We hope you enjoy the show.”

White praised the efforts of the NC Baptist Men, an organization that responds in the aftermath of natural and man-made disasters.

“Our show benefits their Disaster Relief Fund,” White noted. “Some of those men are with us tonight and we welcome them to Colerain. They do wonderful work; we know what they are capable to doing by what they did here after the tornado of April, 2011. They were in Colerain for a long time after that storm and worked very hard. While here they spread the word of God through their actions. We are so thankful for them. The funds we raise here tonight will go directly to them so they can continue their good work, whenever and wherever they are needed.”

Preston Spear spoke on behalf of the Baptist Men.

“This is a wonderful thing the Colerain community is doing for our organization,” he said. “We put in some long hours here after the tornado, but we did it with God’s help and to his glory. God bless you all.”

The evening’s “playbill” was packed with various acts. Numerous members of the Colerain community took part, some portraying well-known entertainers and other famous historical figures from different time periods.

Colerain’s next generation – Lily Silverthorne as Shirley Temple, and Andrew Raynor as Alfalfa – put their talents on display. Raynor’s performance – “Take Me Out to the Ballgame” was in tribute to Colerain’s dominance 50 years ago in the ranks of semi-professional baseball.

“Baseball is a part of Colerain’s history,” said Raynor, dressed in the uniform of his Little League team. “Let’s salute Dr. Fowler, a member of Colerain’s original baseball team.”

The famous Patti Page was performed by Phyllis Downey, singing “The Tennessee Waltz.”

The “Blooming Bloomers” – Amelia Adams, Betty Baker, Bernice Brooks, Dianne Harrell, Linda Northcott, and Patsy Perry – complete with bloomers and umbrellas, were among the fun acts of the evening.

A tribute to Colerain’s old Myers Theater was acted out by Ed Cullipher Jr. as he, dressed in proper attire, portrayed a singing cowboy in an old B-Western movie. He performed an all-time favorite – “Back in the Saddle Again.”

“We all remember when Main Street in small towns was where the crowd would gather,” said White. “Main Street in Colerain was the hot spot. It was where everyone stopped and shared the news, shared stories.”

Nancy Harrell sang an old Doris Day song – “Que Sera, Sera (Whatever Will Be, Will Be)”, first published in 1956.

Raymond Cale and Nonie Mizelle teamed for a skit entitled – “Kelly and the Church Lady.”

Closing out the first portion of the evening’s program were bluegrass performers Bob and Nancy Joyner, and Tommy Brown, who kept the crowd in stitches with his portrayal of Ernest T. Bass from the popular TV show of the 1960’s, the Andy Griffin Show.

Then came perhaps the funniest moment of the night when Lynn Raynor and Sheran White had the audience rolling in the aisles by respectively portraying “Mr. Tudball” and “Mrs. Wiggins” (aka Tim Conway and Carol Burnett) from the wildly popular Carol Burnett Show in the late 60’s to the mid 70’s.

The program moved to the current day where Kyle Barnes and Sam Felton communicated with each other (while sitting side-by-side) through text messages; Logan Hughes performed an alternative rock song; Gracie Bowell, Karen Brooks, Kathleen Brooks, and Sam Felton danced to the Cupid Shuffle; John Sasser portrayed a nerd; Stephen Adams was a rapper; and Craig Felton dressed as Si Robinson from the hit TV show, Duck Dynasty.

In the closing scene, Milton and Ronnie Felton shared funny stories of Colerain as “Son and Fatback.”

With Bob and Nancy Joyner providing the rhythm, the skit ended with the audience joining in on two spirituals – “I’ll Fly Away” and “In the Garden.”

Form held for the incumbents in municipal elections in Bertie County Tuesday night. Of the county’s eight municipalities where voting... read more